Difference between revisions of "Basil Mott" 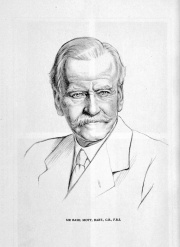 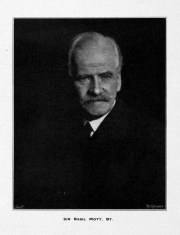 SIR BASIL MOTT, Bart., C.B., F.R.S., was born in Leicester on the 16th September, 1859, and died in London on the 7th September, 1938. He was educated at Leicester Grammar School, at the International College, Isleworth, Middlesex, in Soleure, Switzerland, and at the Royal School of Mines, South Kensington, where he won the Murchison Medal in 1879.

After spending some years as a Mining Engineer for a number of collieries, becoming thoroughly conversant with underground working conditions, he commenced his association with the work with which his name will be more particularly associated by becoming assistant to the late Mr. J. H. Greathead, M. Inst. C.E. At that time, the London tube railway system was in its infancy, the only railways of this type in existence being the shallow Metropolitan and District Railways, both steam operated. The first tube of modern type was the City & South London Railway, originally known as the City & Southwark Railway, from the Monument to Stockwell, constructed by Greathead between 1886 and 1890. Though only 25 years of age Basil Mott was appointed Resident Engineer for this work, which was of a revolutionary nature, the Greathead shield being employed for the first time on a large scale. The construction of the railway was successfully completed, but many unforeseen difficulties arose before the line, with its novel electrical equipment, could be opened for public traffic on a satisfactory basis. Mott was asked, at this critical stage, to take charge of the running of the line, and he did so for several years, until the early troubles had been overcome. He was thus able to acquire an unique experience of the interrelation between traffic and constructional problems on tube railways.

Basil Mott then entered into partnership with the late Sir Benjamin Baker, Past-President Inst. C.E., and the firm commenced the construction of the second deep-level tube, still known as the Central London Railway, from the Bank to Shepherds Bush, costing £3,114,000. This railway was opened in 1900.

After Sir Benjamin Baker’s death in 1907, Mott carried on his own practice as a Consulting Engineer with his partner, Mr. David Hay, M. Inst. C.E., with whom, and with Mr. David Anderson, M. Inst. C.E., joined later by Mr. G. L. Groves, M. Inst. C.E., he continued to practise until his death.

His association with London tubes did not end with the construction of the Central London Railway. The tube system grew and became coordinated. Traffic increased, escalators were introduced to take the place of the early lifts ; tunnels for larger rolling-stock and many miles of extensions were required for the two lines on which Mott had done so much pioneer work. As Consulting Engineer to the London Passenger Transport Board he was in later years responsible with his firm for carrying out the many large constructional works necessitated by these new conditions. Though he may be remembered primarily as a tunnel engineer, he was associated as senior partner in the firm of Mott, Hay & Anderson, with many important bridge schemes and other works relating to road transport during his long period of service. In London he had been associated with Sir Benjamin Baker in the scheme for widening Blackfriars bridge, and he carried this out after Sir Benjamin’s death. He was also Engineer for the widening of Kingston bridge and the reconstruction of Southwark bridge. The latter was started in 1913 and, after being held up during the Great War, was completed in 1921. Other bridges carried out in different parts of the country include the Queensferry bridge over the Dee at Chester, the new Tyne bridge at Newcastle-upon-Tyne, Wearmouth bridge at Sunderland, Boothferry bridge near Goole, Newport bridge at Newport, Monmouthshire, and the vertical lift bridge over the Tees at Middlesbrough.

The new Tyne bridge at Newcastle was an imposing single-span high-level road bridge, with an arch-span of 531 feet and a rise of 170 feet from the pin centres. The vertical lift bridge over the Tees at Middlesbrough was of special interest because it was not only the first of the vertical lift type to be constructed in Great Britain, but was one of the largest of this type in the world.

One of the most important projects with which Sir Basil Mott was associated in his later years was the Mersey road tunnel. This was the largest sub-aqueous tunnel in the world. No tunnel approaching it in length and diameter, ventilated for petrol-driven traffic, had ever been attempted before, and the burden of solving the many problems which arose during its construction fell primarily on Sir Basil Mott’s shoulders. The work was successfully completed, and the tunnel was opened on the 18th July, 1934.

During the Great War Sir Basil served on several Government Committees and visited not only France; but also India, and for his services and advice he was made a Companion of the Order of the Bath. After the War Sir Basil was consulted by the Ministry of Transport, and among others, made reports on the Charing Cross bridge scheme, the Channel tunnel, and other important schemes. He was also a Member of the Severn Barrage Committee of the Economic Advisory Council. In 1925, considerable anxiety arose regarding the condition of St. Paul’s Cathedral, and a Works Committee of engineers and architects was appointed to take the necessary steps for the preservation of the fabric. Sir Basil was appointed Chairman of the Committee. In the King’s Birthday Honours List of 1930, Mr. Mott was created a baronet in recognition of his many services to engineering. He was elected a Fellow of the Royal Society in 1932.

Sir Basil was elected a Member of The Institution in 1895, a Member of Council in 1912, Vice-President in 1920, and President in 1924. His intimate association with the work of the Council was of the greatest value to The Institution, as his engineering achievements in the construction of underground railways and tunnels, particularly the Mersey tunnel, have been of the greatest utility and benefit to the country.

He married Florence Harmar Parker, by whom he had two sons.