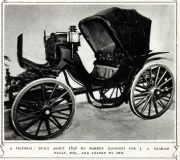 November 1907. Rolls-Royce car with body by Barker and Co. 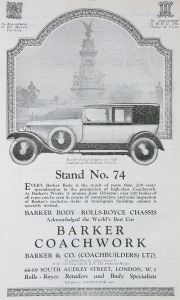 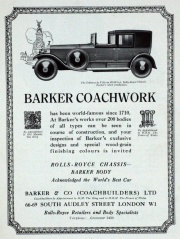 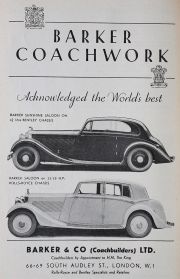 October 1936. A Barker body on a Bentley chassis. 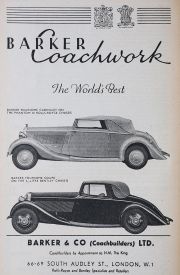 1852 Partnership change. '...the Partnership lately subsisting between William Courtney, of Chandos street, Covent-Garden, deceased, and us the undersigned, in the trade or business of Coach Builders, under the style or firm of Barker and Company, expired on the 14th instant.— Witness our hands this 30th day of April 1852. William Charles Courtney, Charles Barker Courtney. William Charles Courtney, Charles Barker Courtney. Exors. to the late William Courtney.'[3]

1903 Mention of the late Alfred Collyer-Bristow, a partner in Barker and Co of 66 Chandos Street.[5]

1913 Presentation inkwell engraved 'The Firm Of Barker & Co Coachbuilders by Margaret Lloyd, E.O.Lloyd & E.A.C Lloyd' and 'in remembrance of Alfred Collyer-Bristow, Mary Collyer-Bristow and James Findlay'[6] (1917 announcement in The Times 'Mrs. E. O. Lloyd and Mrs. E. A. C. Lloyd wish to thank many kind friends for their letters and sympathy, and regret that they are unable to answer them all at present, but hope to do so in time.')

After the 1920s Barker & Co seemed to be unable to keep up with advances in the use of light alloys for framing. Requests for sturdier bodies were met by using heavier components which hampered the finished product's performance.

1938 The company fell into receivership and its brand name and business were taken over by its long-term rival Hooper & Co which in its turn was taken over by Daimler in 1940 and so became part of the BSA group.

1938 Taken over by Hooper and Co (Coachbuilders), St James Street, London which was already owned by BSA, and was assigned to Daimler (a B.S.A. subsidiary) c.1940.[7]

Barker was the recommended bodywork supplier for early Rolls-Royce cars, although the choice was the customer's and there were several other prominent builders. One such Rolls-Royce with Barker bodywork, The Silver Ghost, is now the most valuable car in the world, valued at USD$57 million. The Silver Ghost was originally built for Rolls-Royce for use in their publicity activities.

Some idea of the scale of their operations may be gauged from their advertisement in The Times on the opening of the 1912 Motor Show at London's Olympia. They described themselves as Coachbuilders to H.M. The King, London Retailers and Body Specialists for Rolls-Royce Cars. They advised the reader that Barker Bodies on Rolls-Royce chassis may be viewed on their own stand 146 as well as on Rolls-Royce Stand 72. The note is added: "Nearly 100 Rolls-Royce Cars, with Barker Bodies, of various types to order, can always be seen in course of completion at our Works. Complete Rolls-Royce Cars ready for immediate delivery". 66-68, South Audley Street, London W. Telephone Mayfair 5435.[8]

As well as Rolls-Royce and Bentley, Barker also constructed bodywork on chassis by other manufacturers including Daimler, Napier, Packard, Cadillac, Duesenberg, and Mercedes-Benz.

Note: The company records are held in the Science Museum, with ledgers from 1799.[9]