Grace's Guide is the leading source of historical information on industry and manufacturing in Britain. This web publication contains 142,928 pages of information and 228,821 images on early companies, their products and the people who designed and built them. 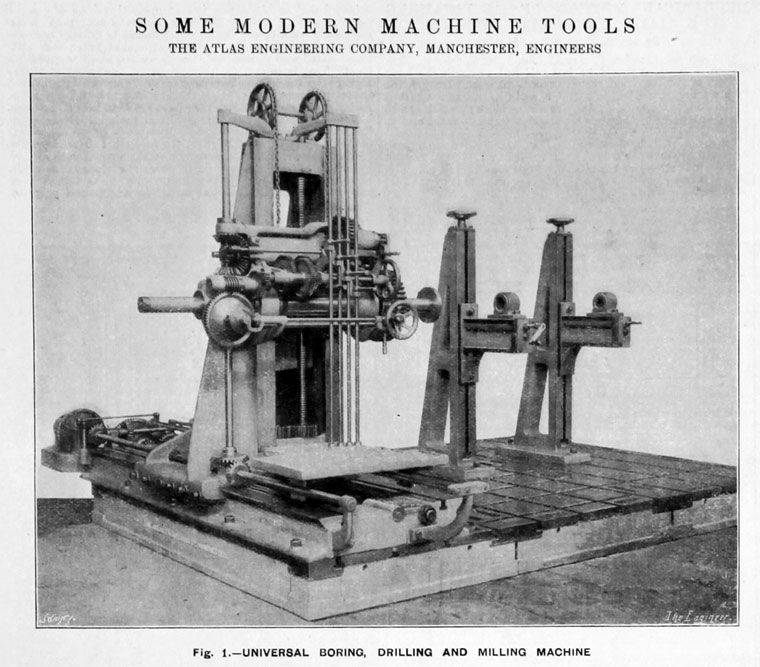 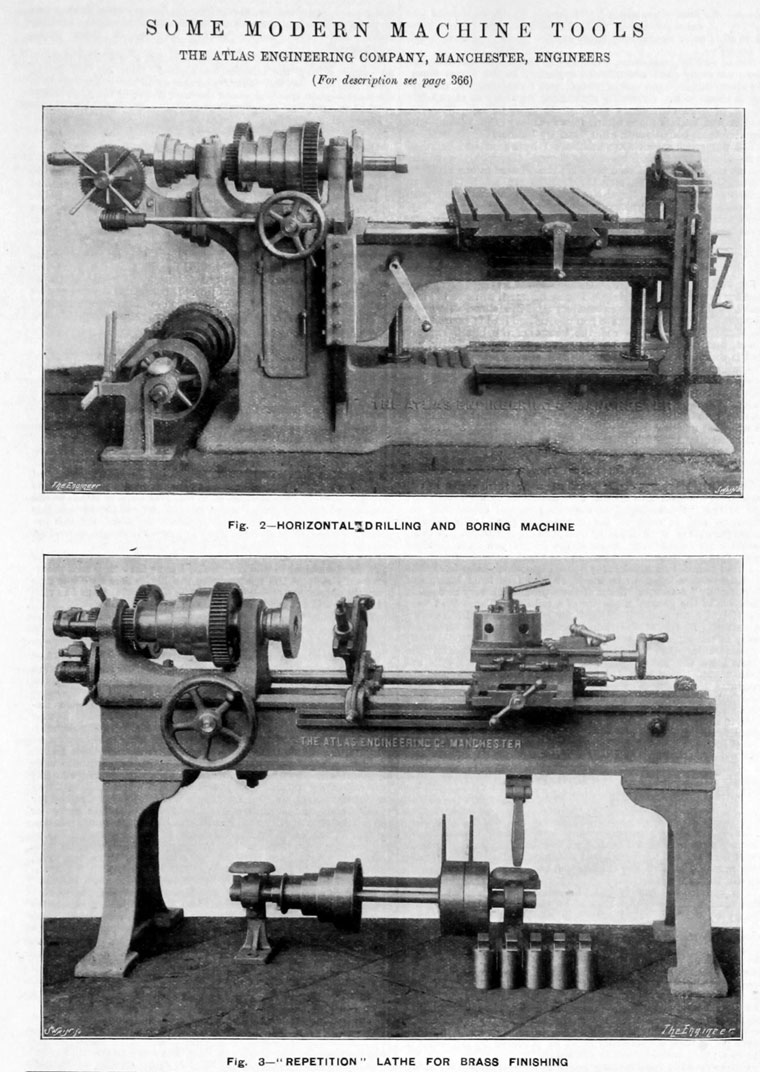 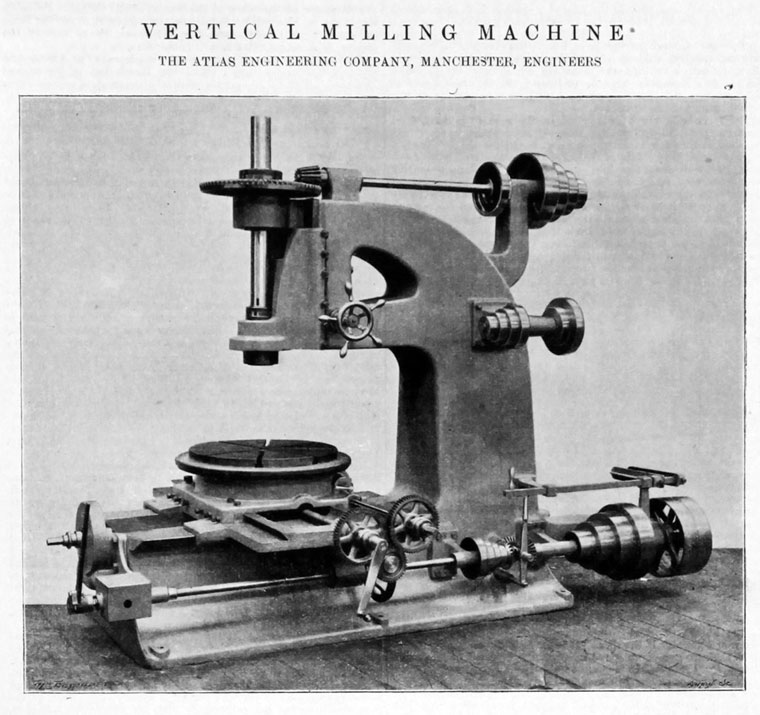 Atlas Engineering Co. shaper of circa 1900 made to the Hendey friction type shaper design. It is unknown whether this was made under licence or was an infringing copy. 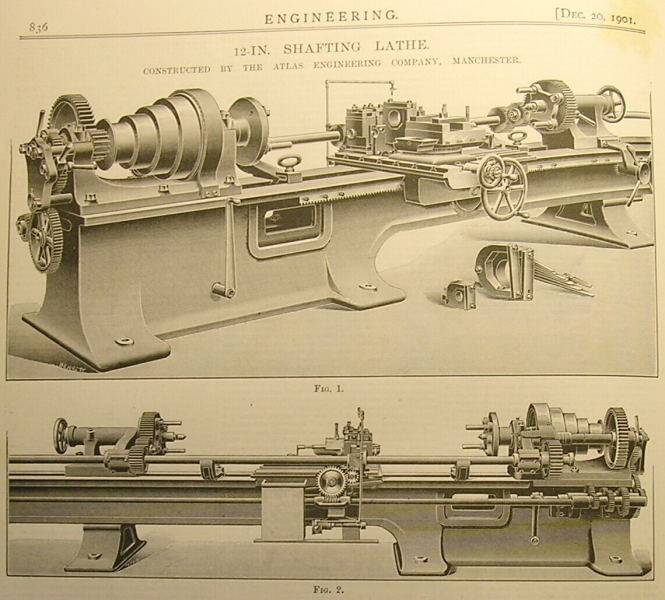 1892 Description and illustrations of lathe and milling machine in 'The Engineer'. The 6-inch 'Empire' lathe 'is a remarkably substantial machine, and is of sufficient power to reduce a 3in. steel bar down to 2 1/2in. in just one cut with a feed of 16 per inch - a very heavy test for a lathe of this size, and a proof of what may be accomplished by excellence of design and workmanship. ... Another speciality of the Atlas Company is an improved type of milling machine, which they are making in various sizes, ranging from No. 1 with 8in. traverse, to No. 12, which has a transverse traverse of 24in. ..... The one illustrated is No. 10, and is a strong substantial tool, having a transverse traverse of 22in. ... The feed gear is driven by means of a worm and worm wheel, with a telescopic shaft, propelled by suitable feed cones. The swivel slide is indexed to 90in. each way, and the feed and elevating screw are graduated in 1000ths and also in 32nds.' [1]

1897 Henry Jermy left the Partnership with John Barnouin Rowcliffe and Fred Rowcliffe carrying on business as Engineers and Tool Makers at Levenshulme Mill, Levenshulme under the style or firm of the Atlas Engineering Company[3]

1898 The Partnership formerly subsisting between John Barnouin Rowcliffe and Fred Rowcliffe, carrying on business as Engineers and Tool Makers at Levenshulme Mill, Levenshulme, near Manchester, under the style of the ATLAS ENGINEERING COMPANY, has been dissolved as from the nineteenth day of October 1898.[4]

1899 Atlas No. 12 milling machine described and illustrated in the American Machinist [5]

1901 Shafting lathe featured in 'Engineering' [8]. 30 ft long bed. The workpiece was driven at both ends, using a splined shaft to transmit the drive from the headstock to the tailstock spindle.

1905 EGM at the registered office of the Atlas Engineering Co, Virginia-street, Southport (not sure whether this was the same company), with A. Malam in the chair; agreement that the Company be wound up voluntarily[9]

1905 Atlas Engineering Co. Ltd was in liquidation; general meeting of the members at 5 Tulketh Street, Southport[10]

1907 Advert: 'TUESDAY NEXT, as a Going Concern.
Valuable Freehold Engineering and Tool-Making Works at Levenshulme, Manchester.
LOMAX, SONS, & MILLS will OFFER FOR SALE BY AUCTION, at the Thatched House Hotel, Manchester, on TUESDAY, May 14th, 1907, at Three for Four o'clock in the afternoon, subject to conditions:
THE Valuable FREEHOLD Modern ENGINEERING WORKS, known as the Atlas Works, situate Chapel-street, Levenshulme, Manchester, comprising 6,745 square yards of Land, with the Water Rights, Reservoir, Trade Buildings, including new erecting shop, 119 ft. 9in. by 75ft.; machine shop, 120 ft. by 40ft.; four-storey waggon-building shop, 120 ft. 40ft. ; smithy, pattern shop, store rooms, excellent range of offices, chimney and outbuildings, together with the steam boiler, two steam and one gas engines, millwrights' work, steam, water and gas piping, 10-ton overhead travelling crane, water store tanks, and fixtures; together with
The Modern MACHINE TOOLS and WORKING PLANT which are in excellent working condition, including 30 sliding, surfacing, screw cutting and Capstan lathes, 6in. to 15in. centres on cast beds 22ft. long; one lO 1/2in. electric-driven lathe, with 10ft. bed; boring lathe; seven radial and other drilling machines; electric-driven 3ft. 6in. radial drill (Mather's patent); five planing machines; key shaping machine; slotting machine. 6in. stroke; horizontal boring machine; three milling machines; emery grinder; plate bending, punching, and tube expanding machines; wood working machines; three wall cranes, three overhead runners; three power hack saws; grindstone, fitters' benches, vices, contents of smithy; electric motor and dynamo; machine tool accessories; hand tools and appliances, belting, store and tool racks, safes, office furniture and effects; also the patterns and drawings of the Atlas machine tools and the Hercules steam motor waggons.
The whole property is freehold, and will be sold subject to two yearly chief rents amounting in the aggregate £100.
The purchaser will be required to take over at a valuation to be made by the auctioneers, the joint expense of the vendor and purchaser, the new stores, castings, machine parts, and steam motor waggon fittings, and he will also have the option to acquire in the same manner the "Hercules" steam motor waggons.
The WORKS will in the first instance be offered as a whole as a going concern and if not so disposed of the freehold will then be offered separately.
For further particulars, and to inspect schedules or orders to view, apply to the Auctioneers, 54, John Dalton-street, Manchester Central Chambers.' [11]