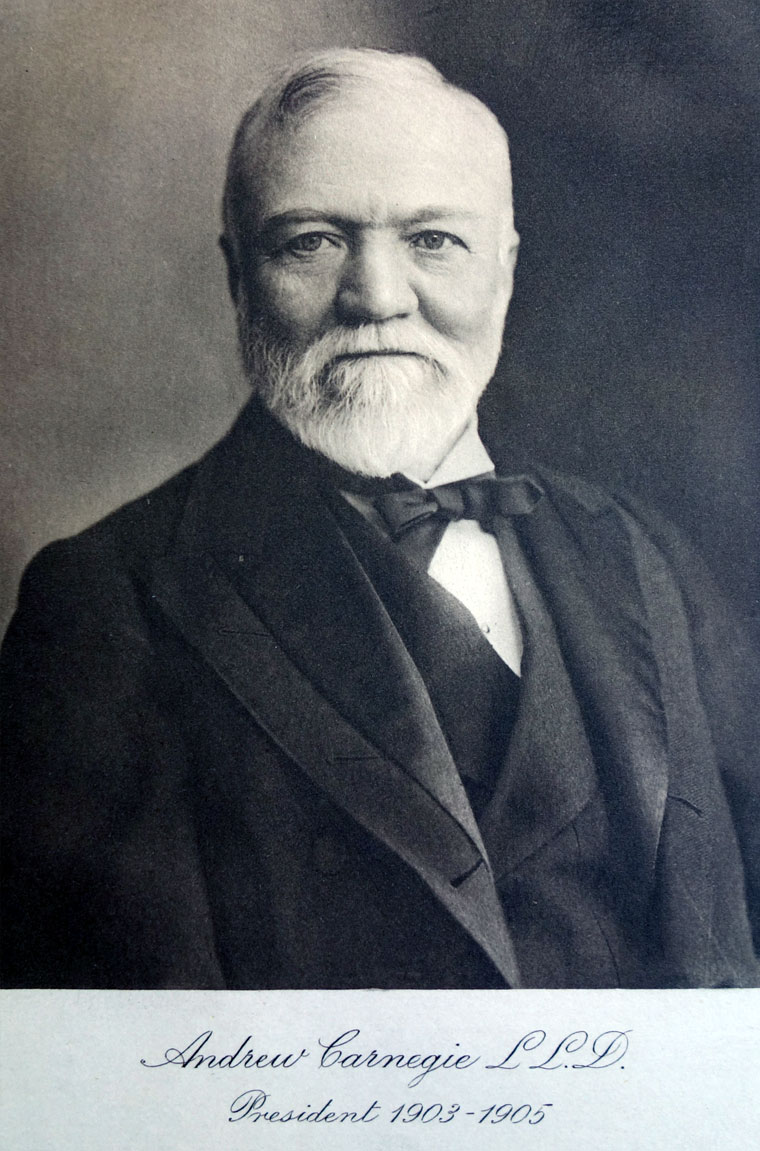 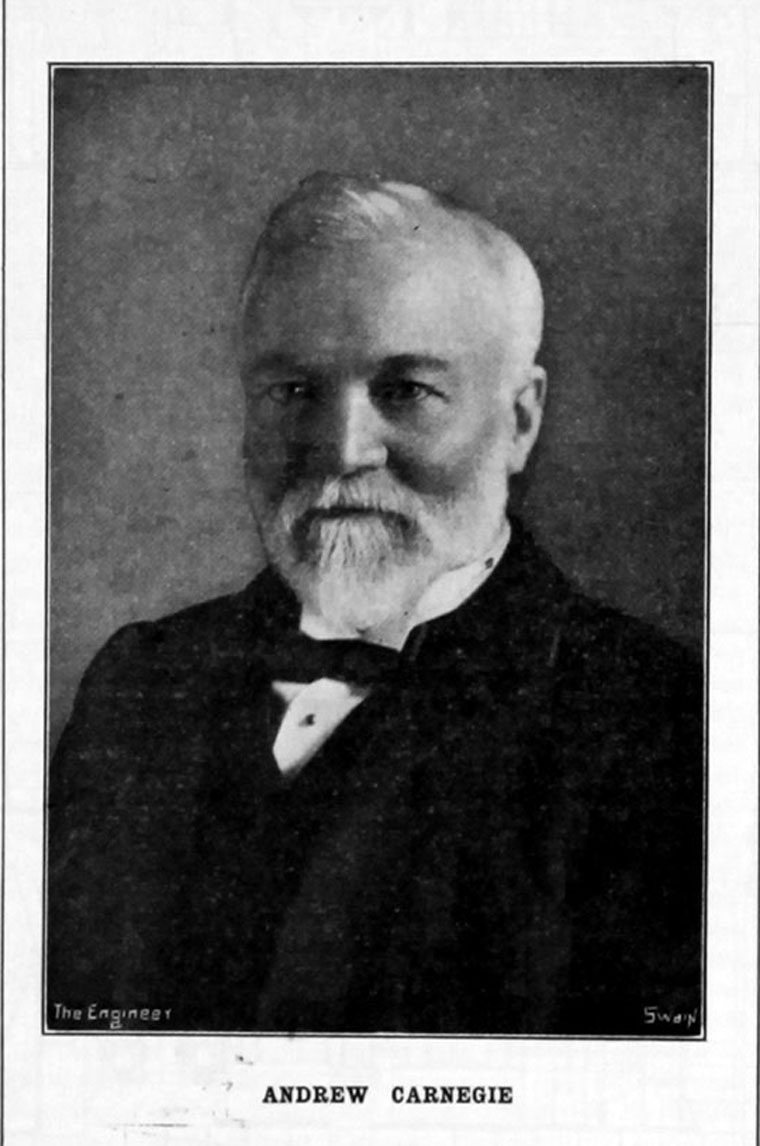 Andrew Carnegie (1835-1919) was a Scottish-American industrialist who led the enormous expansion of the American steel industry in the late 19th century.

1835 November 25th. Andrew Carnegie was born in Dunfermline, Scotland, in a typical weaver's cottage with only one main room, consisting of half the ground floor which was shared with the neighbouring weaver's family. The main room served as a living room, dining room and bedroom. He was named after his legal grandfather.

In 1836, the family moved to a larger house in Edgar Street (opposite Reid's Park), following the demand for more heavy damask from which his father, William Carnegie, benefited. His uncle, George Lauder, whom he referred to as "Dod", introduced him to the writings of Robert Burns and historical Scottish heroes such as Robert the Bruce, William Wallace, and Rob Roy.

Falling on very hard times as a handloom weaver and with the country in starvation, William Carnegie decided to move with his family to Allegheny, Pennsylvania, in the United States in 1848 for the prospect of a better life. Andrew's family had to borrow money in order to migrate. Allegheny was a very poor area.

His first job at age 13 in 1848 was as a bobbin boy, changing spools of thread in a cotton mill 12 hours a day, 6 days a week in a Pittsburgh cotton factory. His starting wage was $1.20 per week. Andrew's father, William Carnegie, started off working in a cotton mill but then would earn money weaving and peddling linens. His mother, Margaret Morrison Carnegie, earned money by binding shoes

ANDREW CARNEGIE, Past-President, died at his residence, Shadow Brook, near Lenox, Massachusetts, on August 11, 1919. He was born November 25, 1835, in Dunfermline, Scotland, the son of a weaver. The business of his father was so impaired by the introduction of steam that in 1848 the family emigrated to America. Andrew Carnegie's first step in business was as a bobbin boy at a wage of $1.20 per week. At fifteen years of age he became a messenger boy for the Ohio Telegraph Company, finally becoming a telegraph operator.

His connection with the iron industry began in 1861, when he was called to serve as a mediator in a partnership dispute in the firm of Kloman & Co., who operated an iron rolling mill in Pittsburg, is which Henry Phipps held an interest. That his Scottish sagacity gave him seine realisation of the great future for iron was evidenced in 1864 by his taking a substantial interest in the Cyclops Iron Company, planned as a rival of the Kloman mill, and which built a plant at Thirty-third Street, Pittsburg. Only a year later the two merged as the Union Iron Mills, the capital stock being $500,000. This business was not particularly prosperous, but the genius of Mr. Carnegie, as a business expander, made itself felt, one of his important strokes being an arrangement whereby the Union Iron Mills supplied shapes to Piper & Shiftier. This firm was the forerunner of the Keystone Bridge Company, of which it became part in 1865, the new company being formed with Mr. Carnegie on the directorate.

In 1870 Kloman, Carnegie & Co., was organised for the purpose of building a blast-furnace at Fifty-first Street, Pittsburg. It was the first Lucy Furnace. About 1873 the firm of Wilson, Walker & Co., with Andrew Carnegie as a silent partner, was formed to purchase the Lower Union Mill, this mill in 1886 becoming a part of Carnegie, Phipps & Co., Ltd. In 1867, after a visit to Great Britain, he intro- duced the Bessemer process of steel manufacture. In 1879 the Pitts-..,. burg Bessemer Steel Co., Ltd., was organised to build a mill at Home- stead. Simultaneously, Andrew Kloman began the erection of a mill, - but he died before it was completed, and the Kloman property was bought by the Pittsburg Bessemer Steel Company.

In 1881 Carnegie Brothers & Co. was organised. It included the Union Iron Mills, Lucy Furnaces, Edgar Thomson Steel Company, and some mining properties. In 1882 Henry Clay Frick was admitted to the Carnegie group. Mr. Carnegie and his company bought a large interest in the H. C. Frick Coke Company, and increased his holdings in 1886. In that year was organised the Duquesne Steel Company, but before the completion of its works it was re-organised as the Allegeny Bessemer Steel Company. The new company encountered labour trouble, the result being that in 1890 the company was purchased by Mr. Carnegie.

In 1886 the organisation of Carnegie, Phipps & Co., Ltd., brought together the Lucy Furnaces, the Upper and Lower Union Mills, and the Pittsburg Bessemer Steel Co., Homestead. In 1892 the Carnegie Steel Co., Ltd., was formed, consolidating all the Carnegie properties, the capital of the new company being 25,000,000 dollars. The principal properties merged consisted of the Upper and Lower Union Mills, the Lucy Furnaces, Edgar Thomson Steel Company, Pittsburg Bessemer Steel Company, Homestead, Duquesne Steel Company, and Key- stone Bridge Company. The year 1892 was in several ways a fateful one for Mr. Carnegie and his associates, for it brought the great Home- stead strike, and also saw the beginning of the acquisition of Lake Superior Ore Properties, which later gave the company no small measure of its supremacy.

In 1901 the work of amalgamation was extended still further, and through the agency of Mr. Pierpont Morgan the foundation of the United States Steel Corporation was taken in hand, with the Carnegie undertaking as its basis. A number of other well-known firms were absorbed, and when the initial scheme was complete the aggregate capital was well over £200,000,000. A year later Mr. Carnegie retired from active business.

His interests after his retirement were mainly in education, in the Universal Peace Movement, and in rewarding acts of heroism. Of Universities, especially in Scotland, he was a munificent supporter. Some years ago the capital value of Mr. Carnegie's permanent foundations in America alone was about £72,000,000, not including £5,000,000 which he had distributed privately among Universities and Colleges in the United States and in Canada.

In 1901 he presented to the Iron and Steel Institute a sum which was subsequently increased to 100,000 dollars, which forms a research fund from which grants in aid of research work are awarded annually.

In 1904 he was awarded by the Council the Bessemer Gold Medal, for his services in the advancement of metallurgy. He was a member of numerous technical societies, and was a life member of the Iron and Steel Institute. He was elected to the Presidential Chair in 1903. At the instance of Mr. Carnegie the Institute was enabled in 1904 to pay an extended visit to the United States, when he acted as one of the principal hosts.