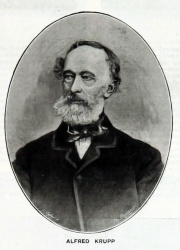 A series of detailed articles were published in 1887, on the death of Alfred Krupp, regarding his life's work. Access them via the links below;

ALFRED KRUPP died on the 14th of July, 1887. With him passed away one who, perhaps, has had the greatest career in manufacturing industry of any man in modern times, a man who from the smallest beginnings built up the largest metallurgical works in the world, and introduced into general use a material that has had a considerable influence in modifying the economical progress and resources of every country in Europe.

Mr. Krupp was born on the 26th of April, 1812, and consequently was in his seventy-sixth year. He was the son of Frederick Krupp, of Essen, who really began the manufacture of steel on the large scale by the Huntsman system ; but like most pioneers of a new industry, he lost his small fortune in perfecting the art.

Therefore at the death of Frederick Krupp in 1826, Alfred succeeded to an embryo manufacture, and certainly not with much encouragement to pursue a trade that appeared to possess none of the elements of success. At Frederick Krupp's death the little foundry had but a couple of workmen, and one of these was Alfred Krupp. The steel made then was exclusively for turning-tools, and such like, and Alfred Krupp when he had made sufficient at a time, used to ride on horseback through the neighbourhood to sell it, often in such quantities as half cut at a time.

From this class of manufacture Alfred Krupp proceeded to make die-steel, as used for coining, and in this he had at last the highest reputation in Germany. The primitive tools he then possessed were chiefly made by himself, and of course were all hand-worked, the workman turning the crank, and Krupp manipulating the steel under the tilt. His first lathe was driven by an old barrel, which he had fitted up for the driving-strap.

From die-steel he passed on to steel for mint-rolls, and for rolling out wire for bullion-lace. For these his skill in hardening was unrivalled, so that lace-rolls supplied at this early period are still in work.

The next step was fitting up mint-machinery, and several of the continental mints contain specimens of Alfred Krupp’s early industry. Every portion of profit was put into plant, and the greatest economy was observed, a habit that never left him, for in the smallest trifles he was always careful, although never miserly.

From the lace-rolls he conceived the idea of making spoons and forks and such articles, by engraving in relief on the rolls the shape and pattern of the article to be produced. This was his first patent, taken out in 1845, and afterwards sold for England to Messrs. Elkington, of Birmingham, for £23,000. This was not only a small fortune to the young man, but a great encouragement, and he went back to his workshop with increased determination to succeed.

Now commenced his chief source of industry, and that from which his name has become of world-wide renown, for it was about this time he began the application of steel for railway uses and for ordnance.

He produced his first steel gun in 1847. This was a 3-pounder muzzle-loader. Very many trials with the gun ensued, but all failed to destroy it. This gun is now in the Berlin Museum.

In 1850 a 6-pounder was made, and exhibited in the Great Exhibition of 1851, being the only piece of ordnance there. Krupp exhibited other manufactures, such as rolls, tool-steel, a cuirass, &c.

The Council Medal was awarded to him, and it was the only medal given to manufacturers of all nations for this class of goods. Alfred Krupp esteemed this piece of bronze through his whole life more than all the after awards that were given him. There was also exhibited by him a small ingot of some 3 tons that was then considered a metallurgical wonder.

About this time he invented his system of manufacturing weldless steel tires for railway uses. He knew that steel of a quality fit for this purpose could not be welded, and therefore his ingenuity was exercised to produce a tire without a joint. In the prosecution of his trials his usual thrift was observed, for his experiments were in lead, so that he could easily melt down his failures, and thus not lose the material. In this manufacture he succeeded perfectly, and his system was patented in 1850.

The antagonism of the makers of iron tires was of course great, and the belief in steel for this purpose by locomotive engineers was little, consequently it was long before he could get a start. The making of so few tires became expensive, so that the then price was £130 per ton, which, of course, added greatly to his difficulty in getting rid of his production, as the best Low Moor tires were about £42 per ton. It was, however,,soon discovered when the trials were made, that the steel tire was not only cheaper, but safer, and gradually it has driven its iron competitor out of the field. Alfred Krupp did not confine his industry to tires, but axles, springs, and all other working parts were made of the new material, and have likewise entirely superseded iron.

It is, however, with ordnance that the name of Krupp has been chiefly associated, and it is curious to note the gradual development from 1850. From that date to 1854 was a blank. In the latter year three guns were made.

In 1855 eight pieces, in 1856 twelve, and so on increasing, so that in 1866 there were supplied one thousand five hundred and sixty-two guns, and still larger numbers in after years. The total number delivered greatly exceeds twenty thousand.

Up to 1855-6 the guns were muzzle-loaders, when Mr. Krupp turned his attention to breech-loading, and with such success that his system is adopted almost exclusively by all nations possessing artillery excepting England, France, and the United States. It can be easily conceived how this greatly increased application of steel should have extended the works so that there are now employed considerably over twenty thousand men. There have been added to the Essen establishment, collieries, blast-furnaces, ore-mines, and other necessaries for making the works self-contained. The little ingot of 1851 is the ancestor of blocks weighing over 70 tons, which have to be manipulated and wrought into enormous pieces of ordnance.

The little 3-pounder of 1847 has developed into a breech-loader weighing 120 tons, throwing a projectile of over l ton in weight. The works cover an immense area, and there are about 180 acres of roofing to shops.

Alfred Krupp has ever been careful of his workmen, and has erected dwelling-houses for all. These are substantially built, and the sanitary conditions have been carefully studied. There are hospitals with a full staff of surgeons, schools for the children, and churches for both denominations, for although Alfred Krupp was Lutheran, he did not allow any difference to intervene on the score of religious opinion. All were the same to him, and it was his chief happiness to know that his works were the means of providing a means of subsistence to so large an industrial population. There are at Essen bakeries for the supply of the best bread, and butchers' shop; and a co-operative establishment where most of the commodities required by the work people can be obtained.

The establishments are not allowed to make more profit than can properly cover expenses, and no man is allowed to run into debt by having credit. Like most industrial potentates, Mr. Krupp was a man of great simplicity of idea. Titles were offered to him but declined, although he received the large number of decorations presented as tokens of the high respect in which he was held by the givers. His education had been well attended to in early youth, and he was a good linguist, even learning, at the age of seventy, the Italian language, which he spoke with facility-a proof of his strong will in overcoming difficulties. Alfred Krupp was buried on the 18th of July, 1887, and perhaps there has never been seen such a gathering at the interment of a civilian. There must have been considerably over sixty thousand people present. The Emperor of Germany and the King of Saxony were personally represented.

Mr. Krupp was for twenty-eight years an Associate of the Institution, having been elected on the 1st of March, 1859. He was also an Honorary Member of the Iron and Steel Institute.