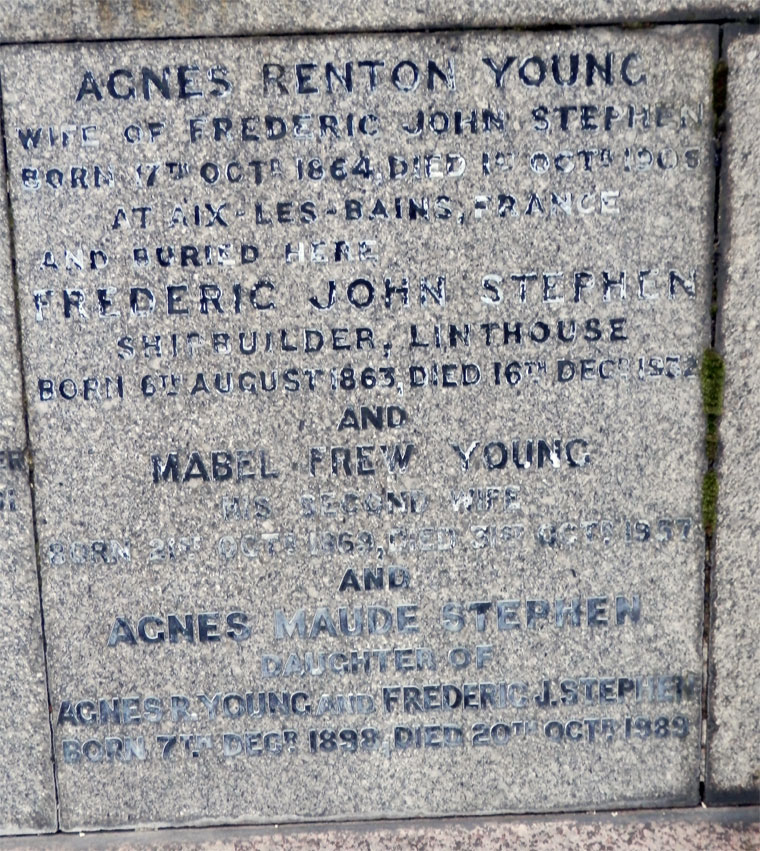 We have to record with much regret the death of Mr. Alexander Stephen, aged 67, senior partner in the well-known Clyde shipbuilding and engineering firm of Messrs. Alexander Stephen and Sons, Linthouse, which took place on the morning of the 19th inst., of influenza, at his town residence in Park-terrace, Glasgow.

He was born at Arbroath on April 25th, 1832, and was educated in Aberdeen and Dundee, and studied subsequently at Edinburgh University, where he gave special attention to the subjects bearing most directly on his future profession.

His apprenticeship as a shipwright was begun in the yard of his father at Dundee in 1849, exactly fifty years ago. About that period the shipbuilders of Britain were put upon their mettle by the enterprise of their American rivals, who were filling the docks of London and Liverpool with ships, then regarded, and with some reason, as the finest types for beauty and speed that the world had seen. The Chinese trade had been captured by the clippers of New York and Boston, and it seemed only a question of time when the stars and stripes would drive the red ensign from the seas where it had so long reigned supreme. Fortunately the men then representing British shipbuilding proved equal to the occasion, and Dundee, represented by Alex. Stephen, father and son, took no inconsiderable share in eclipsing the successes of the transatlantic builders. The fine series of Dundee-built ships, commencing with the Amazon and culminating in the Eastern Monarch, were for strength, model, and speed, worthy to stand in the front rank of the vessels of a period critical in the history of the British mercantile marine. Into the spirit of this exciting struggle young Mr. Stephen threw himself with a determination and single-mindedness which had their due effect. The young shipwright soon became highly proficient as a designer and model-maker, aud all through his career Mr. Stephen was one of the very few who have been at once heads of firms and able to make their ship models with their own hands. His vessels soon became known, not only for soundness of construction, but also for beauty of form, and many of them have had eventful histories. One, for instance, after doing splendid service as the Sea King in the peaceful capacity of a China tea-clipper, was converted into the notorious Confederate cruiser Shenandoah, and ultimately became the Sultan of Zanzibar's yacht.

The introduction of iron, which gave a new direction to the science of naval architecture, opened an attractive field, into which, after having the benefit of some years' university training, young Mr. Stephen plunged with characteristic energy and tenacity. The firm having taken a long lease of Kelvinhaugh Patent Slip and Building Yard on the Clyde, turned to iron shipbuilding with marked success, having launched some of the finest sailing ships on the Clyde in the opening years of the sixth decade. Among the striking productions of this early period were the Storm Cloud, the White Eagle, and other renowned clippers, which lost nothing by comparison with the best specimens of American shipbuilding. Not content with excellence in iron and wood ship building, Mr. Alexander Stephen struck out a new line by putting afloat a succession of beautiful clipper sailing ships of the composite clnss. His lead in this new departure was followed not only by his fellow-shipbuilders on the Clyde and in England, but by the Admiralty as well; the composite system in a very modified form being still used for vessels when it is desirable or necessaTy to have copper protective sheathing and avoid frequent docking. Finding in the course of time the premises at Kelvinhaugh too limited, and to meet the growing demand for steam vessels in ocean navigation, the firm bought in 1868 the fine old estate of Linthouse, where works and plant for both engineering and shipbuilding were erected, which are today amongst the finest and most complete on the Clyde, or elsewhere. Mr. Stephen was a man who gave close and constant attention to his business, and to this marked characteristic of the man is due nminly his great success. Among mail steamers built by Mr. Stephen were some for Brazil, and in 1872 the Emperor o{ that State decorated him with the Order of a "Knight Officer of the Rose." Mr. Stephen's firm has also all along built for important shipping concerns, such as the Hamburg American Company, Messrs. Sloman, Hamburg; the Anchor Line, the Clan Line, and the Allan Line, for the latter of which they have on hand at preseut a magnificent twin screw steamer of over 10,200 tons.

Mr. Stephen leaves a wife and three sons and three daughters, most of whom are married - the two eldest sons, Mr. Alexander E. Stephen, and Mr. Fred. J. Stephen, being partners in the firm at Linthouse with Mr. John Stephen, their uncle. About eleven years ago, when his sons were beginning to take share of the cares of the business, the late Mr. Stephen purchased the pretty sylvan retreat known as Kelly estate, at Wemyss Bay, on the Firth of Clyde, from the trustees of the family of the late James Young, of paraffin fame. He demolished the old mansion-house and built himself a beautiful home, where he has spent the greater part of the years since its completion. His close application to business, and the pleasure he took in his work, kept him away from what is commonly called "public life," but he found time for some participation in this as well. He was for some years chairman of the Technical College, Glasgow, and was held in high esteem by all leaders of education in the city. He was the first chairman of the Govan School Board, where he sat for many years, and in 1882 and 1883 he was Lord Dean of Guild for Glasgow, and filled both positions with credit and distinction.