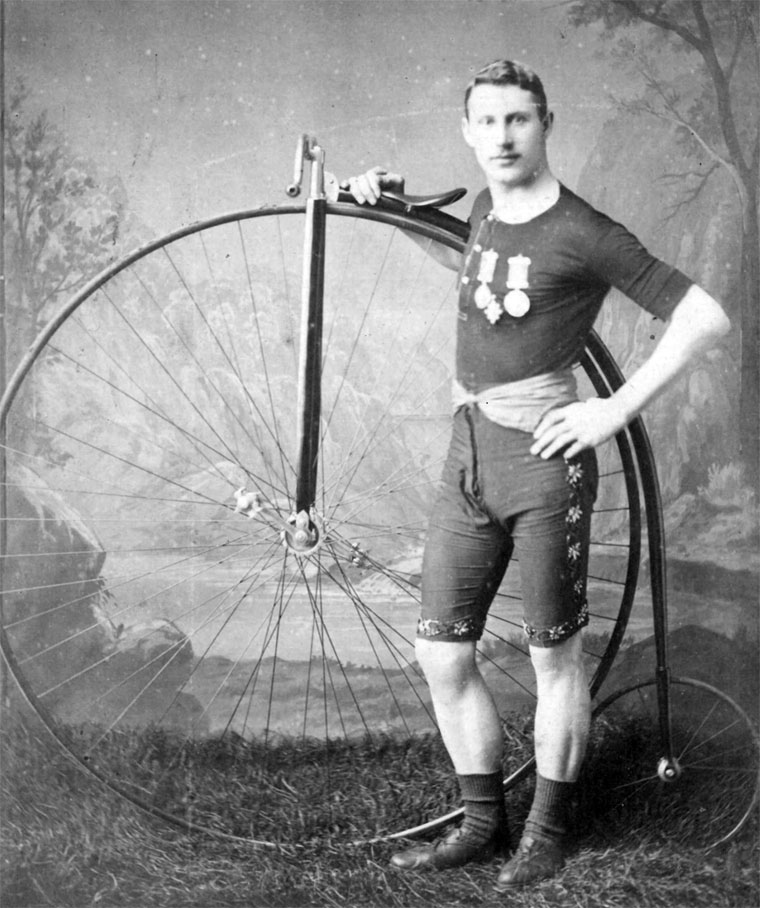 c1865 Born at Penkridge, Staffordshire the son of William Dyke, a Corn Merchant's Labourer, and his wife Hester.[1]

As I promised last week, I going to tell you bit about R. M. Wright's doings (not misdeeds) which gathered from a chat I had with him for the benefit of my readers — they are big crowd and I come across them in many unexpected quarters. Numberless cups, vases, statuettes, shields, and other trophies of the race path, are shown me by the subject of my interview with pardonable pride. "How came it about," I asked "that you ride under an assumed name?" "In 1881, when I started racing, I rode in my own name, Albert George Dyke. I was then 16, and was apprenticed at Wolverhampton. In 1881, I had a bad smash, and my employer then said he would not allow me to race, but I thought I could do something, so I decided I would try. I wrote to the N.C.U. and A.A.A., stating my case, and asking that I allowed to ride in a family name R. M. Wright. I was granted permission, but with the condition that I never ride in any other name so long as I live."

"Where did you ride your first race?" "At Aston Lower Grounds, Birmingham, in '80, and I won one mile scratch, open to those who had never won a first prize. I won easily in the good time of 3min. l.5sec. was on a solid tyred ordinary, weighing 46lbs. and considered very light. We had 201b. machines then; we had to slog along." "A sort of boneshaker, eh!" "Yes, that's the kind. I tried again at Stourbridge in July of that year. After a desperate finish on a grass track in pouring rain, I was placed second to Frank Moore, at that time N.C.U. champion. At the big meeting at Stoke-on-Trent, I tried for the third time, I was on the mark. H. L. Cortis, the famous racer who was the first to cover 20 miles in an hour, was scratch. There was a big field, and Cortis just caught me in the last turn of the wheel, and secured first honours in record time. Being only a youngster, turned to me, and giving this gold ring, said, 'You plucky young dog, accept this small present, and may you live long to wear it.'" "Did you race again that year?" "Yes, Wolverhampton, in October, where I had the race in hand, but missed my pedal, and to miss your pedal on an ordinary is a serious thing. Well, I came a terrible smash, and it was feared I should never ride again, but I had the winter before me for giving me a rest, but I was laid up over three months. However, I was it again in 1881.

R. M. W. then showed me a list of wins for that year, at such places as Birmingham, Coventry, Stratford-on-Avon, Stourbridge, Derby, Burton-on-Trent, Wolverhampton, &c., &c., all places which the very best men have raced. "Didn't you win a championship in '83?"— "Yes, at Wolverhampton. It was the two miles and I received that silver cup.

"In '84 I was it line form, and in July did the half-mile in 1.16 winning the handicap. August Bank Holiday I won a double event at Stratford-on-Avon, and the next week at West Bromwich I won the mile, but had the usual luck to be brought down in the two mile, a rider falling in front of me.

"It was in that year that I made my first appearance at Lincoln — the day when Bob Cripps had a good innings. It was about the biggest day's sport ever seen in Lincoln. Fields were large, and class was represented. I made up mind to win the two miles handicap, but I found Watts, of Liverpool, a little too good for me. He beat me a foot; Cripps was third, a yard behind. To my surprise, and to the surprise of Cripps too, he placed first, Watts second, and myself third, about the worst judged race I ever saw. Cripps and I often talk about it when discussing old times. I rode at Stoke-on-Trent the next week, winning another double event from virtual scratch. "The best race ever rode in" was the 10 mile scratch tor the Birchfield Harriers 50 guinea challenge cup. The starters included W. F. Ball, R. Cripps, W. Tingy, W. Ilston, K. J. Priddy, A. H. Robb (now a pro.), and several others. In the final, at the bend, where a sheet would cover all, Cripps got away when I missed my pedal as I was passing him, but I was only six inches behind him the post. The tune of the 10 miles was 22.5 minutes.

"How many prizes altogether?" "Over 100, of the value of £600. and I have them all now. The collection includes eight gold and six silver medals, watches, chains, jewellery, &c., besides twelve clocks."

"How have you fared regards accidents ?"— "Well, I've had my share. I have had a broken arm, a broken collar bone, and cuts by the dozen all over body, Racing in the days of the good old ordinary was racing, and mighty risky too."

"Didn't you ride safety in the Grimsby 100 miles road race?"— "Yes, a solid tyred Premier, one the first road racing machines of that type. F. S. Buckingham lent it to me; it was geared 68. I received it three days before the race. It did seem funny after the G.0.0., rode from Grimsby to Boston, fifty miles, in 3.35 hours." (This I consider very good, for I can testify the roads are rough and very hilly.)

"At that time I had left everybody miles behind, so I toddled gently back to Grimsby — 7.5 hours there and back. After a walk round I came on to Lincoln, and secured my present berth with the Co-operative Society the same night. A good day's work, truly."

"Who do you consider the best English safetyist? — "My old friend, A. W. Harris." He further considered young Robinson, of Scothern, the likeliest local rider, and said that if properly trained would make one of the best men in the county. "You rode the 38in. Crypto-geared front driver. What is your opinion it, and of the Bantam?" "I liked them very much. The position is beautifully comfortable, and for long rides cannot be beaten, and, Mr. Wheelman," he continued, "for your long plugging rides you could not beat it. The Bantam is, if anything, more comfortable, certainly the fastest machine made — very strong, but very light. The front driver is quite as fast as any other, but prejudice has held it back. Neither F.D. or the Bantam has any side slip, and the rider doesn't know what back-ache is."

"About cycling politics" "The Racing Cyclists' League is all right, if properly worked. In my opinion, it will more for the racing men than anything else. The licensing scheme is a real need, for is not fair that the man in the employ of a cycle firm, who helped in all ways, should be placed on the same footing a man who is say, in the foundry, or club. There should be two classes certainly; it would better for the men and spectators too."

"I believe the Road Club is bossing the big autumn meetings?" "Certainly, it was formed to do what only experienced cyclists can do, to put Lincolnshire once more the head of the list of amateur athletics. I believe this year's meeting will be the biggest ever held the Lindum. We hope to have a track at Lincoln very soon then will bring out some warm novices."

"You are managing the sports department of the big Blankney show?" "Yes, and believe it will be a big success in every way. We have some good entries, and the county mile will an interesting event."

Having then got to know all I decently could I left my old friend, sympathised with him on his being fined £1 l1s. 6d. at Newark last Wednesday, for riding furiously in the mile road race the Road Club were promoting.