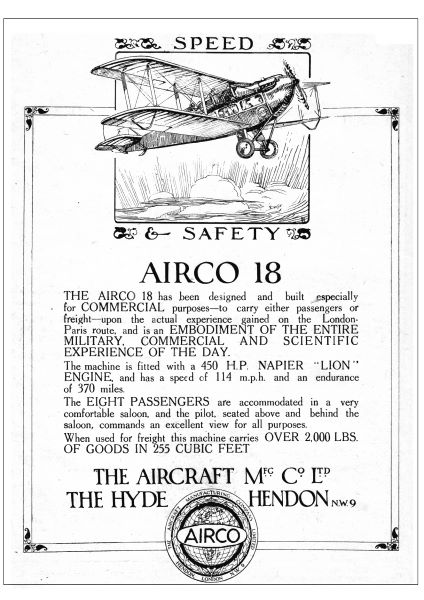 1920. Hucks Aircraft Engine Starter based on a Ford Model T. Exhibit at the Shuttleworth Collection.

The Aircraft Manufacturing Co (Airco) was established at The Hyde in Hendon, North London, England during 1912 by George Holt Thomas.

1914 Geoffrey de Havilland joined as chief designer. His designs were marked with his initials DH.

WWI: The company built 4,000 aircraft, ranging from the DH2 to the DH10, including substantial numbers built by H. H. Martyn from 1915.

1917 The company acquired the aircraft manufacturing activities of H. H. Martyn to form the Gloucestershire Aircraft Co which was producing 45 aircraft / week by 1918. They produced ten of the Felixstowe F5 Seaplane

Post-WWI: The company, in conjunction with La Societe des Moteurs Gnome and George Holt Thomas, was awarded £74,000 by the Royal Commission on Awards to Inventors for the Gnome 80 hp and La Rhone engines in addition to the £200,000 already received from H.M. Government; and £75,000 for the Gnome monosoupape engine. Also the company together with Captain De Havilland were awarded £35,000 by the Commission, for the D.H. aeroplanes. And the company was awarded £65,000 by the Commission in respect of communication to the US government of inventions, designs, etc in relation to aircraft and aircraft accessories[2]

The company's DH16 and DH18 types were operated by Aircraft Transport and Travel, the first airline established in the United Kingdom, which was also owned by George Holt Thomas.