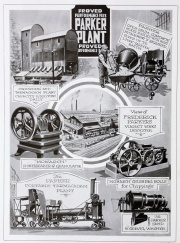 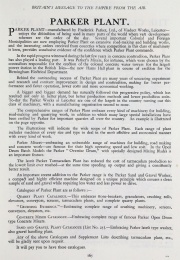 Municipalities are now employing Parker Plant on extensive road-making and building works, and the increasing orders received from countries where competition in this class of machinery is keen, provides conclusive evidence of the confidence which Parker Plant commands.

In the rapid progress witnessed during the last few years in concrete construction, Parker Plant has also played a leading part. It was Parker's Mixers, for instance, which were chosen by the contractors responsible for the erection of the colossal concrete water towers for the largest power Station in the British Isles - the new Hams Hall plant in course of erection for the Birmingham Electrical Department.

Behind the outstanding success of Parker Plant are many years of unceasing experiment and research and constant improvement in design and construction, making far better performance and faster operation, lower costs and more economical working.

A bigger and bigger demand has naturally followed this progressive policy, which has resulted not only in better plant, but better production methods and lower production costs. To-day the Parker Works at Leicester are one of the largest in the country turning out this class of machine, with a manufacturing organisation second to none.

The comprehensive ranges of Parker Plant embrace every kind of machine, for building, road-making and quarrying work, in addition to which many large special installations have been erected by Parker for important quarries all over the country. An example is illustrated on the page opposite.

The illustrations will indicate the wide scope of Parker Plant. Each range of plant includes machines of every size and type to deal in the most effective and economical manner with every kind of work.

Parker Mixers - embracing an unbeatable range of machines for building, road making and concrete work - are famous for their high operating speed and low cost. In the Open Drum Batch Models the Parker "Oversize Drum," with specially designed Mixing Blades is an important feature.

The latest Parker Tarmacadam Plant has reduced the cost of tarmacadam production to the lowest limit ever reached - at the same time speeding up output and giving a consistently better result.

An important recent addition to the Parker range is the Parker Sand and Gravel Washer, a compact and highly efficient machine designed on a unique principle which ensures a clean sample of sand and gravel while requiring less water and less power to drive.

Catalogues of Parker Plant are as follows

Any of the above Catalogues and Supplement Lifts describing tarmacadam plant, etc., will be gladly sent upon request.

It will pay you to have these catalogues.