Grace's Guide is the leading source of historical information on industry and manufacturing in Britain. This web publication contains 148,363 pages of information and 233,846 images on early companies, their products and the people who designed and built them. 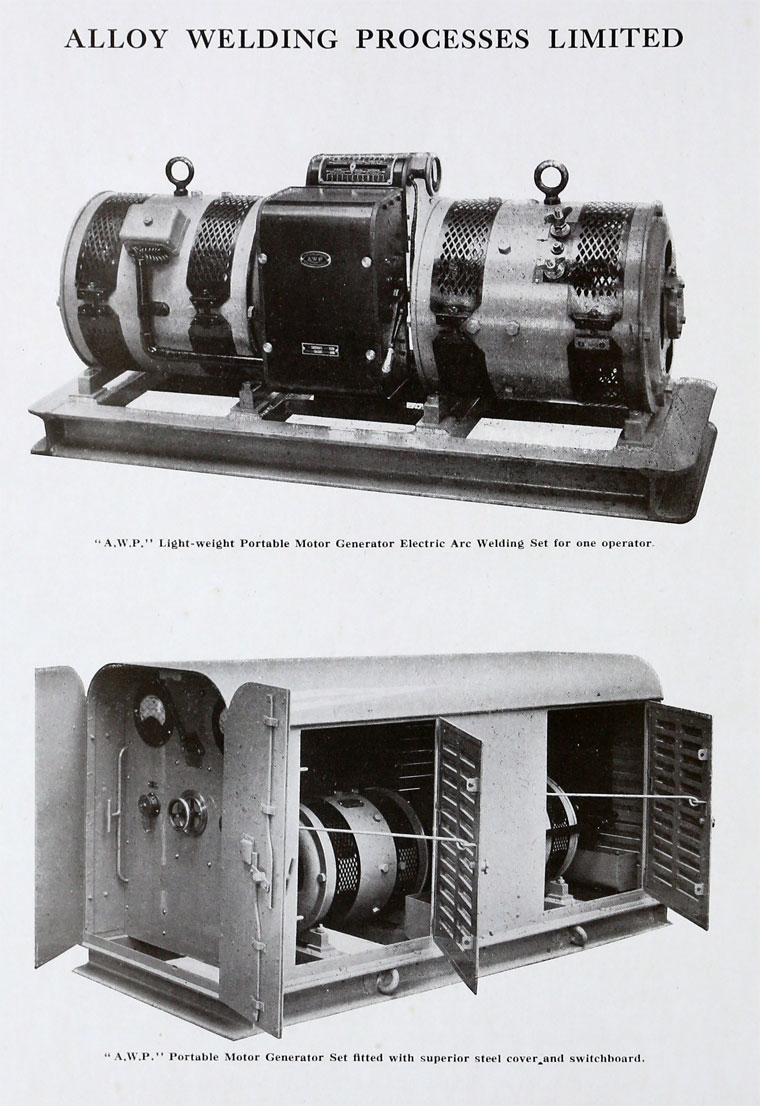 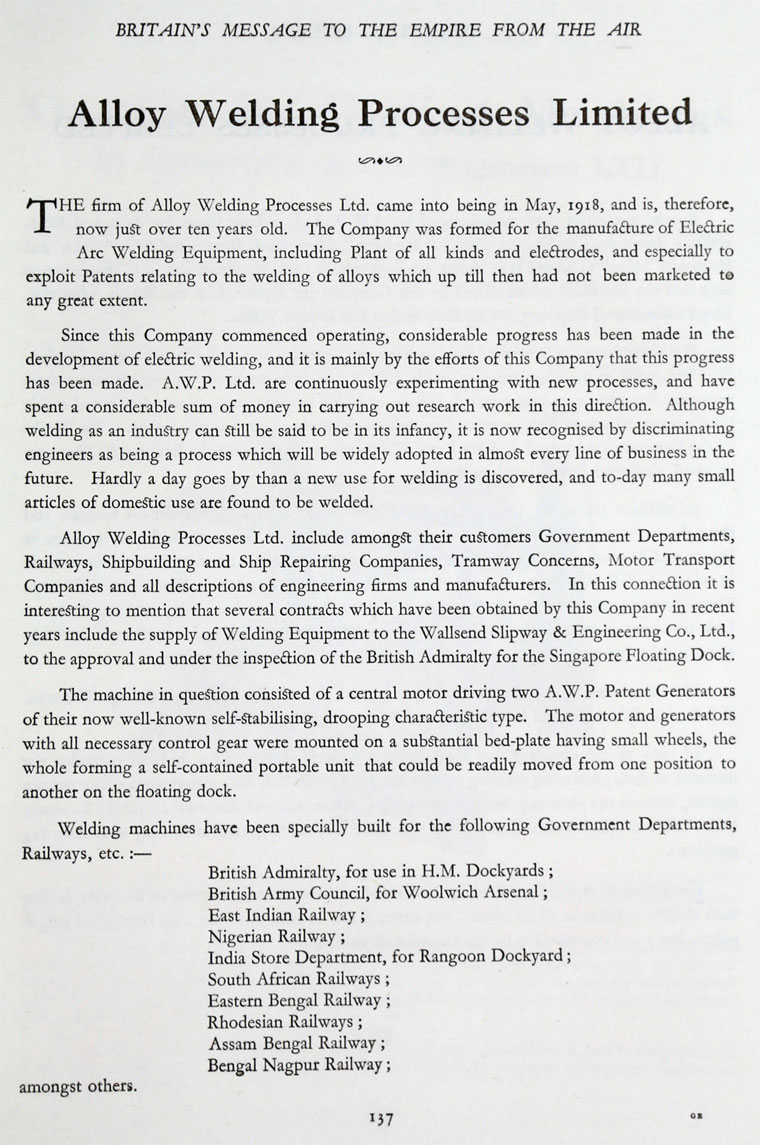 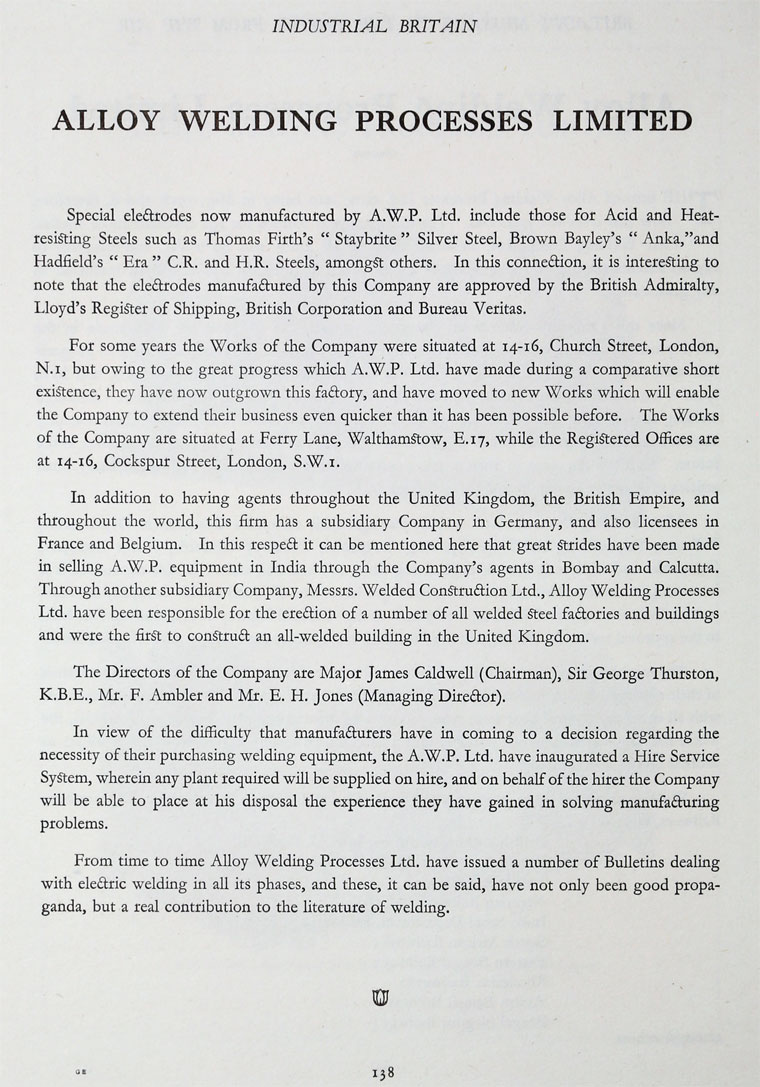 The firm of Alloy Welding Processes Ltd. came into being in May, 1918, and is, therefore, now just over ten years old. The Company was formed for the manufacture of Electric Arc Welding Equipment, including Plant of all kinds and electrodes, and especially to exploit Patents relating to the welding of alloys which up till then had not been marketed to any great extent.

Since this Company commenced operating, considerable progress has been made in the development of electric welding, and it is mainly by the efforts of this Company that this progress has been made. A.W.P. Ltd. are continuously experimenting with new processes, and have spent a considerable sum of money in carrying out research work in this direction. Although welding as an industry can still be said to be in its infancy, it is now recognised by discriminating engineers as being a process which will be widely adopted in almost every line of business in the future. Hardly a day goes by than a new use for welding is discovered, and to-day many small articles of domestic use are found to be welded.

Alloy Welding Processes Ltd. include amongst their customers Government Departments, Railways, Shipbuilding and Ship Repairing Companies, Tramway Concerns, Motor Transport Companies and all descriptions of engineering firms and manufacturers. In this connection it is interesting to mention that several contracts which have been obtained by this Company in recent years include the supply of Welding Equipment to the Wallsend Slipway and Engineering Co., Ltd., to the approval and under the inspection of the British Admiralty fist the Singapore Floating Dock.

The machine in question consisted of a central motor driving two A.W.P. Patent Generators of their now well-known self-stabilising, drooping characteristic type. The motor and generators with all necessary control gear were mounted on a substantial bed-plate having small wheels, the whole forming a self-contained portable unit that could be readily moved from one position to another on the floating dock.

Welding machines have been specially built for the following Government Departments, Railways, etc.

Special electrodes now manufactured by A.W.P. Ltd. include those for Acid and Heat- resifting Steels such as Thomas Firth's "Staybrite" Silver Steel, Brown Bayley's "Anka," and Hadfield's "Era" C.R. and H.R. Steels, amongst others. In this connection, it is interesting to note that the electrodes manufactured by this Company are approved by the British Admiralty, Lloyd's Register of Shipping, British Corporation and Bureau Veritas.

For some years the Works of the Company were situated at 14-16, Church Street, London, N., but owing to the great progress which A.W.P. Ltd. have made during a comparative short existence, they have now outgrown this factory, and have moved to new Works which will enable the Company to extend their business even quicker than it has been possible before. The Works of the Company are situated at Ferry Lane, Walthamstow, E., while the Registered Offices are at 4-16, Cockspur Street, London, S.W.1.

In addition to having agents throughout the United Kingdom, the British Empire, and throughout the world, this firm has a subsidiary Company in Germany, and also licensees in France and Belgium. In this respect it can be mentioned here that great Brides have been made in selling A.W.P. equipment in India through the Company's agents in Bombay and Calcutta. Through another subsidiary Company, Messrs. Welded Construction Ltd., Alloy Welding Processes Ltd. have been responsible for the erection of number of all welded Reel factories and buildings and were the first to construct an all-welded building in the United Kingdom.

In view of the difficulty that manufacturers have in coming to a decision regarding the necessity of their purchasing welding equipment, the A.W.P. Ltd. have inaugurated a Hire Service System, wherein any plant required will be supplied on hire, and on behalf of the hirer the Company will be able to place at his disposal the experience they have gained in solving manufacturing problems.

From time to time Alloy Welding Processes Ltd. have issued a number of Bulletins dealing with electric welding in all its phases, and these, it can be said, have not only been good propaganda, but a real contribution to the literature of welding.