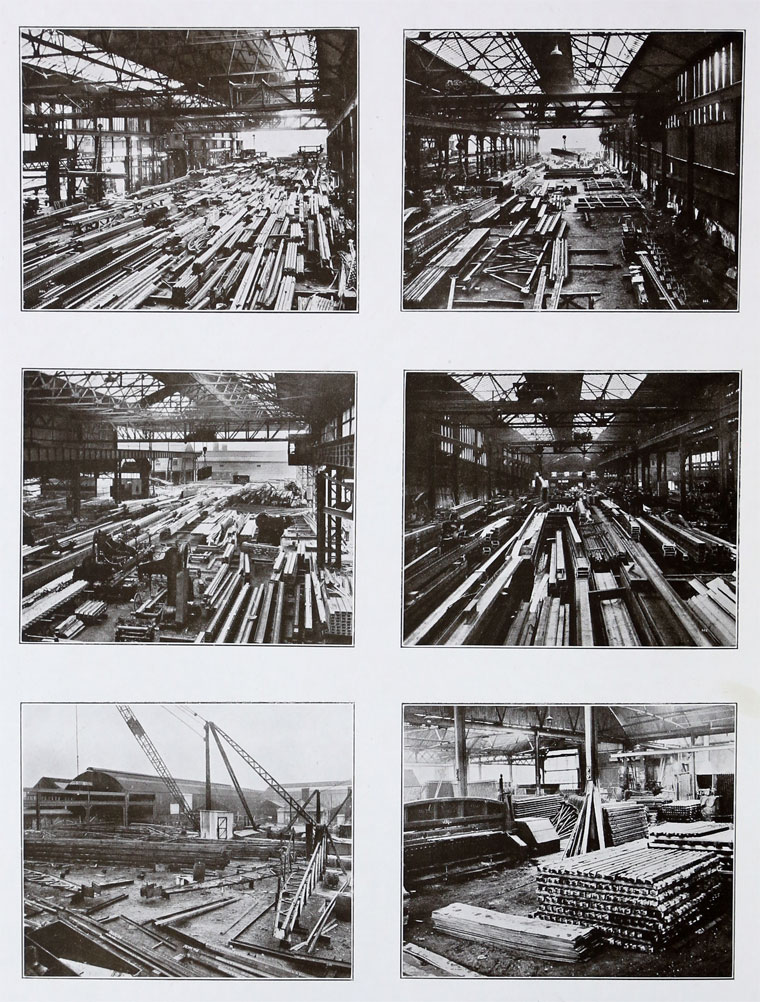 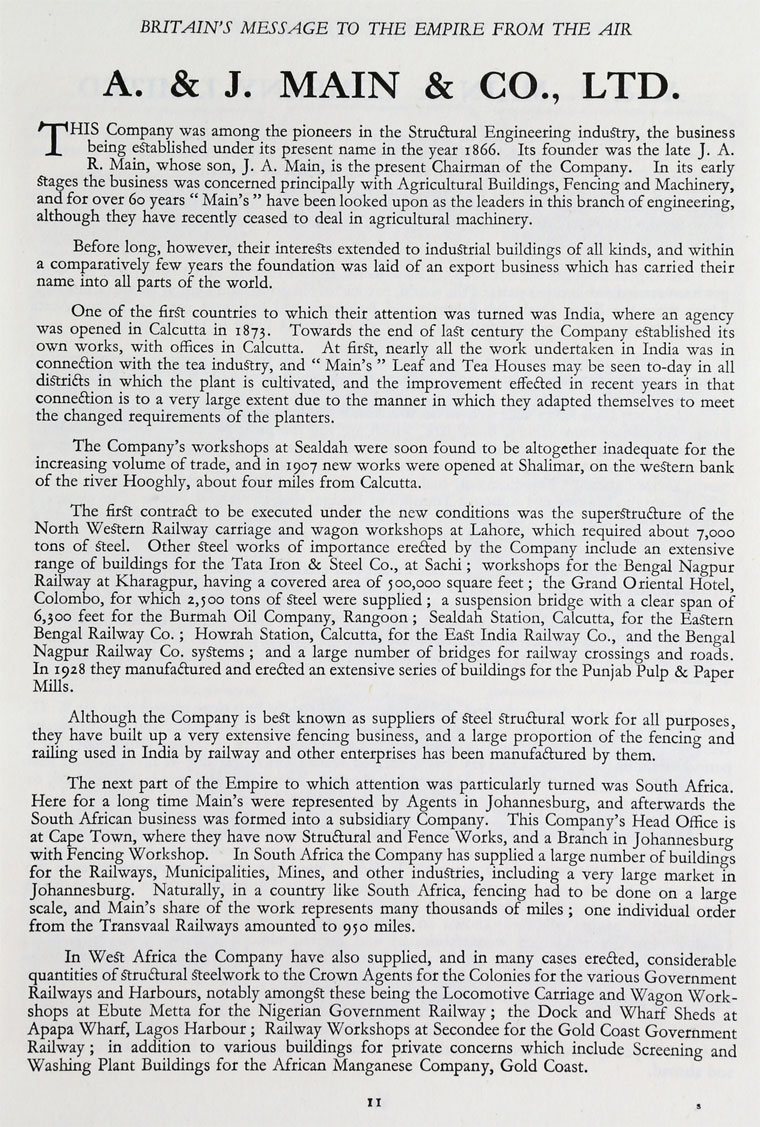 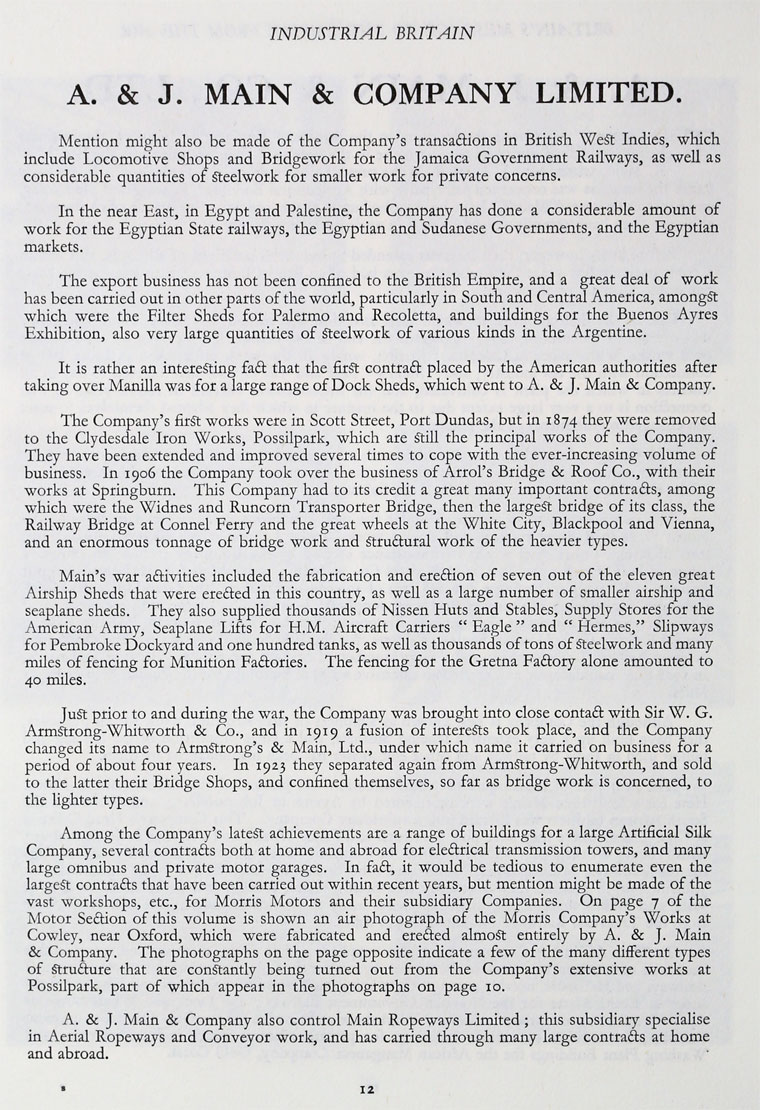 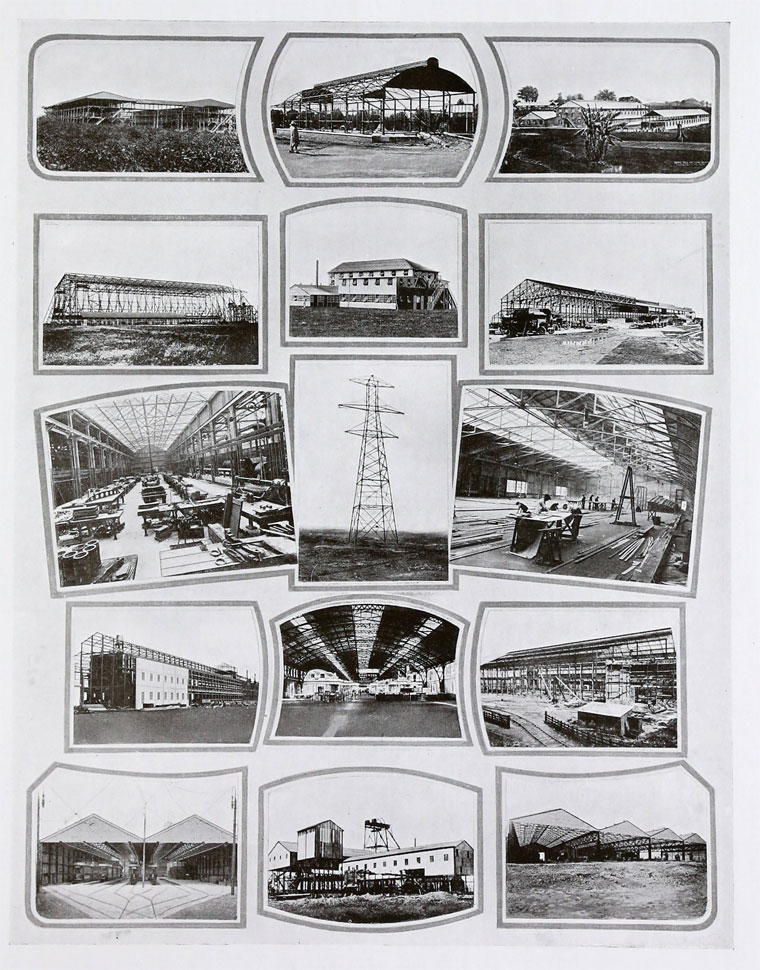 See also A. and J. Main and Co

THIS Company was among the pioneers in the Structural Engineering industry, the business being established under its present name in the year 1866. Its founder was the late J. A. R. Main, whose son, J. A. Main, is the present Chairman of the Company. In its early Stages the business was concerned principally with Agricultural Buildings, Fencing and Machinery, and for over 60 years "Main’s” have been looked upon as the leaders in this branch of engineering, although they have recently ceased to deal in agricultural machinery.

Before long, however, their interests extended to industrial buildings of all kinds, and within a comparatively few years the foundation was laid of an export business which has carried their name into all parts of the world.

One of the first countries to which their attention was turned was India, where an agency was opened in Calcutta in 1873. Towards the end of last century the Company established its own works, with offices in Calcutta. At first, nearly all the work undertaken in India was in conne6tion with the tea industry, and "Main's" Leaf and Tea Houses may be seen to-day in all districts in which the plant is cultivated, and the improvement effected in recent years in that connection is to a very large extent due to the manner in which they adapted themselves to meet the changed requirements of the planters.

The Company's workshops at Sealdah were soon found to be altogether inadequate for the increasing volume of trade, and in 1907 new works were opened at Shalimar, on the western bank of the river Hooghly, about four miles from Calcutta.

The first contract to be executed under the new conditions was the superstructure of the North Western Railway carriage and wagon workshops at Lahore, which required about 7,000 tons of Steel. Other Steel works of importance erected by the Company include an extensive range of buildings for the Tata Iron and Steel Co., at Sachi; workshops for the Bengal Nagpur Railway at Kharagpur, having a covered area of 500,000 square feet; the Grand Oriental Hotel, Colombo, for which 2,500 tons of Steel were supplied; a suspension bridge with a clear span of 6,300 feet for the Burmah Oil Company, Rangoon; Sealdah Station, Calcutta, for the Eastern Bengal Railway Co.; Howrah Station, Calcutta, for the E., India Railway Co., and the Bengal Nagpur Railway Co. systems; and a large number of bridges for railway crossings and roads. In 1928 they manufactured and erected an extensive series of buildings for the Punjab Pulp and Paper Mills.

Although the Company is bat known as suppliers of Steel Structural work for all purposes, they have built up a very extensive fencing business, and a large proportion of the fencing and railing used in India by railway and other enterprises has been manufactured by them.

The next part of the Empire to which attention was particularly turned was South Africa. Here for a long time Main's were represented by Agents in Johannesburg, and afterwards the South African business was formed into a subsidiary Company. This Company's Head Office is at Cape Town, where they have now Structural and Fence Works, and a Branch in Johannesburg with Fencing Workshop. In South Africa the Company has supplied a large number of buildings for the Railways, Municipalities, Mines, and other industries, including a very large market in Johannesburg. Naturally, in a country like South Africa, fencing had to be done on a large scale, and Main's share of the work represents many thousands of miles; one individual order from the Transvaal Railways amounted to 95o miles.

In West Africa the Company have also supplied, and in many cases erected, considerable quantities of Structural Steelwork to the Crown Agents for the Colonies for the various Government Railways and Harbours, notably amongst these being the Locomotive Carriage and Wagon Workshops at Ebute Metta for the Nigerian Government Railway; the Dock and Wharf Sheds at Apapa Wharf, Lagos Harbour; Railway Workshops at Secondee for the Gold Coast Government Railway; in addition to various buildings for private concerns which include Screening and Washing Plant Buildings for the African Manganese Company, Gold Coast.

Mention might also be made of the Company's transactions in British West Indies, which include Locomotive Shops and Bridgework for the Jamaica Government Railways, as well as considerable quantities of Steelwork for smaller work for private concerns.

In the near East, in Egypt and Palestine, the Company has done a considerable amount of work for the Egyptian State railways, the Egyptian and Sudanese Governments, and the Egyptian markets.

The export business has not been confined to the British Empire, and a great deal of work has been carried out in other parts of the world, particularly in South and Central America, amongst which were the Filter Sheds for Palermo and Recoletta, and buildings for the Buenos Ayres Exhibition, also very large quantities of Steelwork of various kinds in the Argentine.

It is rather an interesting fact that the first contract placed by the American authorities after taking over Manilla was for a large range of Dock Sheds, which went to A. and J. Main and Company.

The Company's first works were in Scott Street, Port Dundas, but in 1874 they were removed to the Clydesdale Iron Works, Possilpark, which are still the principal works of the Company. They have been extended and improved several times to cope with the ever-increasing volume of business. In 1906 the Company took over the business of Arrol's Bridge and Roof Co., with their works at Springburn. This Company had to its credit a great many important contracts, among which were the Widnes and Runcorn Transporter Bridge, then the largest bridge of its class, the Railway Bridge at Connel Ferry and the great wheels at the White City, Blackpool and Vienna, and an enormous tonnage of bridge work and Structural work of the heavier types.

Main's war activities included the fabrication and creation of seven out of the eleven great Airship Sheds that were erected in this country, as well as a large number of smaller airship and seaplane sheds. They also supplied thousands of Nissen Huts and Stables, Supply Stores for the American Army, Seaplane Lifts for H.M. Aircraft Carriers "Eagle" and "Hermes," Slipways for Pembroke Dockyard and one hundred tanks, as well as thousands of tons of Steelwork and many miles of fencing for Munition Factories. The fencing for the Gretna Factory alone amounted to 40 miles.

Just prior to and during the war, the Company was brought into close contact with Sir W. G. Armstrong-Whitworth and Co., and in 1919 a fusion of interests took place, and the Company changed its name to Armstrong’s and Main, Ltd., under which name it carried on business for a period of about four years. In 1923, they separated again from Armstrong-Whitworth, and sold to the latter their Bridge Shops, and confined themselves, to far as bridge work is concerned, to the lighter types.

Among the Company's latest achievements are a range of buildings for a large Artificial Silk Company, several contracts both at home and abroad for electrical transmission towers, and many large omnibus and private motor garages. In full, it would be tedious to enumerate even the largest contracts that have been carried out within recent years, but mention might be made of the vast workshops, etc., for Morris Motors and their subsidiary Companies. On page 7 of the Motor Section of this volume is shown an air photograph of the Morris Company's Works at Cowley, near Oxford, which were fabricated and erected almost entirely by A. and J. Main and Company. The photographs on the page opposite indicate a few of the many different types of Structure that are constantly being turned out from the Company's extensive works at Possilpark, part of which appear in the photographs on page to.

A. and J. Main and Company also control Main Ropeways Limited; this subsidiary specialise in Aerial Ropeways and Conveyor work, and has carried through many large contrails at home and abroad.