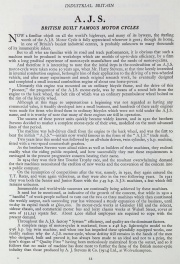 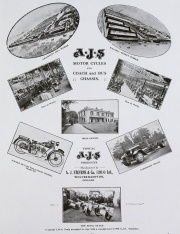 Now a familiar object on all the world's highways, and many of its byways, the sterling worth of the A.J.S. Motor Cycle is fully appreciated wherever it goes though its home, in one of Britain's busiest industrial centres, is probably unknown to many thousands of its innumerable riders.

But to all who are familiar with its road and track performances, it is obvious that such a machine must be produced in workshops which are models of up-to-date efficiency, by a firm with a long practical experience of motor-cycle manufacture and the needs of motor-cyclists.

And therefore it is interesting to note that the initial steps in the construction of an A.J.S. motor-cycle were taken some 30 years ago, when Mr. Harry Stevens, at that time keenly interested in internal combustion engines, bethought him of their application to the driving of a two-wheeled vehicle, and after many experiments and much original research work, he eventually designed and completed a small internal combustion engine of about one horse-power.

Ultimately this engine was mounted on an ordinary bicycle frame, and the drive of this "pioneer," the progenitor of the A.J.S. motor-cycle, was by means of a round belt from the engine to the back wheel, the belt rim of which was an ordinary perambulator wheel bolted to the rim of the bicycle wheel.

Although at this stage so unpretentious a beginning was not regarded as having any commercial value, it steadily developed into a small business, and hundreds of these early engines were made for firms who fitted them to ordinary bicycles which were not sold under the A.J.S. name, and it is worthy of note that many of these engines are Bill in operation.

The success of these power units quickly became widely known, and in 1910 the brothers Stevens decided to market a complete motor-cycle of their own, modelled on the most advanced lines of that period.

The machine was belt-driven dire& from the engine to the back wheel, and was the first to bear the initials "A.J.S." - initials now world famous in the form of the "A.J.S." trade mark.

Two years later this model was followed by an all-chain driven, twin cylinder, I h.p. machine, fitted with a two-speed countershaft gearbox.

As the brothers Stevens were actual riders as well as builders of their machines, they realised exactly what the riding public required, and how successfully they met these requirements is envisaged in the present progressive concern bearing their name.

In 1914 they won their first Tourist Trophy race, and the resultant overwhelming demand for their machines necessitated the erection of new works and the conversion of the concern into a public company.

On the resumption of competitions after the war, namely, in 1920, they again entered the T.T. Races, and were again victorious, as they were also in the two following years. In 1921 they won both the Senior and Junior Races with the 3.49 h.p. A.J.S. machines, a feat which Bill remains unbeaten.

Innumerable and world-wide successes are continually being achieved by these machines.

It need but be mentioned, as indicative of the growth of the concern, that while in 1910 a "handful" of work-people sufficed to turn out the two or three machines which then constituted the weekly output, each succeeding year has witnessed a steady expansion of the business, until to-day its capital Bands at £600,000. Its motor-cycle works at Graiseley Hill and the sidecar, sidecar chassis, and commercial motor bus and lorry chassis works at Walsall Street, cover an area of 355,141 square feet. About 2,000 skilled employees are required to cope with the present demand.

Throughout the A.J.S. factory "System" efficiency, and quality are the dominant factors.

A complete range of motor-cycles is marketed, from a 2.48 h.p. lightweight model to the 9.96 h.p. big twin machine, and when one has inspected these splendidly equipped works, one readily realises why the A.J.S. motor-cycle, whose destiny Bill remains in the hands of the men who designed, built and proved it, has always been made to an ideal and not to a price, the firm's slogan of "Quality First " having been meticulously maintained from the outset, and so it follows that no make of machine has done more to further the fame of the British motor-cycle industry than those produced by A. J. Stevens and Co. (1914) Ltd., at Wolverhampton.