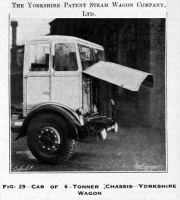 1900 Patents for a double ended locomotive type boiler, which was to become a characteristic feature of all "Yorkshire" wagons, and the transmission to the rear axle were taken out by Joseph Clayton and George Hutchinson Mann. Joseph Clayton was a director in the firm of Clayton, Son and Co of Moor Works, Hunslet and George Mann was the brother of James Hutchinson Mann owner of Mann's Patent Steam Cart and Wagon Co, Pepper Road, Hunslet, Leeds. The first wagons were produced under the name of the Yorkshire Steam Motor Company at a small works in Ingham Street, Leeds in 1901.

1903 The works moved to a new site, alongside the parent company's works and those of Mann's in Pepper Road.

1903 First recorded vehicle (No 6) made by the company

In 1907 the company entered a vehicle in the RAC trials where it won a Gold Medal in Class F. An image of the medal was included on the transfers applied to later Yorkshire wagons.

1911 The name of the company was changed to the Yorkshire Commercial Motor Company (retaining the sub-title). The change was adopted to reflect the firm's short lived diversification into the production of internal combustion engined vehicles.

1922 It was decided by the directors of Deightons Patent Flue and Tube Co that the name of the steam wagon side of the business did not emphasise the type of vehicle that they manufactured and the name reverted to Yorkshire Patent Steam Wagon Company again retaining the sub-title.

1971 A further change of name did not occur until 1971 when the name of the parent company was changed to Yorkshire Vehicles Ltd, 34 years after the last steam wagon had been made at the works.

The first engine used was a two cylinder compound with the cylinders mounted one on each side of the chassis; the high pressure on the off side and the low pressure on the near side. The valves were actuated by a single eccentric reversing gear, similar to that used by Mann's. Sliding gears on the crankshaft driving onto the second motion shaft provided two speeds. The differential was mounted on the second shaft and gears drove the rear wheels. An early modification was to move the differential onto the rear axle which reduced the number of gears required in the transmission. In 1906 a new design of engine was introduced which radically altered the layout of the wagon. The engine was now fully enclosed in a cast iron crank case and was mounted vertically between the frames inside the cab. Hackworth valve gear was adopted and drive to the rear axle was by roller chain. The revised layout had the gearing mounted on an extension of the crankshaft, which gave "Yorkshire" the opportunity to offer three speed versions of the wagon.

Most of the boilers used in the production of "Yorkshire" wagons were supplied by Clayton, Son and Co, the directors of this company also being directors of Deightons Patent Flue and Tube Co. There are records which show that Ruston Proctor of Lincoln also produced several boilers. The original boilers had a square firebox but the boiler was subject to a programme of continual improvement and a circular firebox, to reduce number of stays required in the firebox sides, was patented in 1909. At about this time the wagons were given type references: WA 6 ton, WC 4 ton and WE 3 ton. With modifications, the WE type remained in production until 1931, by which time it must have seemed a thoroughly antiquated machine with its open gears.