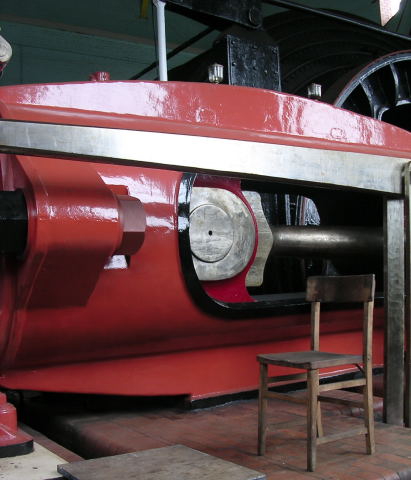 1884 600 HP engine, ex-Jubilee Mill, being installed at Masson Mills in 2014. The overhead crane is by Jackson and Ogden 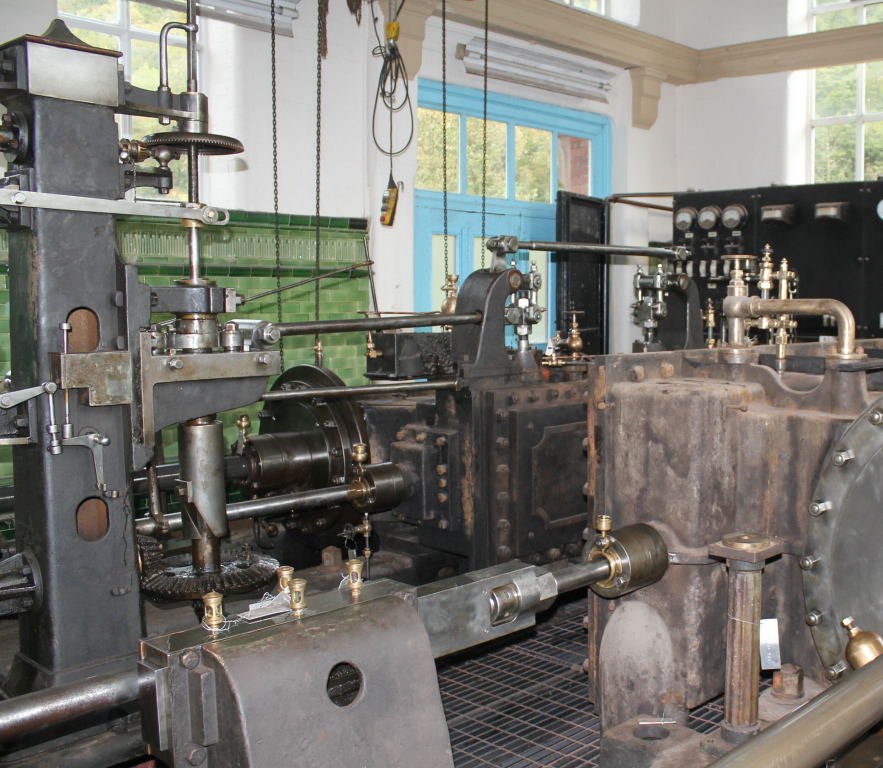 The complicated governing system will reward study in the future

Yates and Thom were makers of engines for mills, collieries and waterworks.

1826 Company established as W. and J. Yates. Exhibit at Manchester's Museum of Science and Industry (or William Yates (of Blackburn))

After 1848 William Yates (of Blackburn) became W. and J. Yates

1884 Supplied a 600 HP cross-compound engine to Jubilee Mill, Padiham. This was retired after nearly 100 years service, and was being installed at Masson Mills, Matlock Bath in 2014 (see photos). At present it can only be seen on pre-booked tours.

1890 Dissolution of the Partnership between William Yates, Frederick Yates, Sydney Robert Yates, and William Thom, at the Canal Foundry and Engineering Works, and the Victoria Boiler Works, in Blackburn, Mechanical Engineers and Boiler Makers, as William and John Yates; business carried on by the said William Yates and William Thom alone, in copartnership together, under the style of Yates and Thom[1]

c.1890 Supplied engines and boilers for the paper mills of Robert Craig and Sons.

c.1901 Supplied six twin cylinder vertical engines driving 1500 kW alternators to Stuart Street Power Station, Manchester [6]. These were compound engines of 2500 HP with cylinders of 36 and 71 inches diameter, 3 ft 6" stroke, running at 94 rpm. The flywheel, located between the cylinders, was assembled from four castings and weighed 70 tons. The 3 phase alternators, made by the Electrical Co Ltd, generated at 6500V, 50 Hz. These engines were being augmented in 1904 by two 6000 HP triple expansion Yates & Thom engines.[7]

1905 The company was registered on 18 July, to acquire the business of the firm of the same name, engineers, ironfounders and boiler makers. [8]

1918 Advert in New Zealand for redundant plant at the Wahii-Paeroa Gold Extraction Co (in liquidation) included 'ONE (1) YATES AND THOM COMPOUND HORIZONTAL TANDEM JET-CONDENSING STEAM ENGINE; cylinders 12 and 22in, stroke. 30in, revolutions 90; rated at 200 b.h.p.; complete with 5 cotton ropes and rope pulleys.'[10]

1928 Became Foster, Yates and Thom when it was acquired by Joseph Foster and Sons.[12]

1930 'HUGE CASTING. BLACKBURN FIRM'S SUCCESSFUL START ON DIFFICULT TASK.
Blackburn has just turned out its largest casting through Messrs. Joseph Foster and Sons, Cana] Foundry, successors to Messrs. Yates and Thom. It was the first of four quarter segments cast for the rotor of huge electric generator being built by the British Electric Co. Preston for a well-known British steel firm.
The four segments together weigh about 115 tons. For the first segment the workmen used three large ladles, two containing over 16 tons of molten iron, and the third about six tons. The delicate operation was carried out in two minutes without hitch.
The order for the rotor was placed a fortnight ago and a guarantee of quick delivery was the means of bringing the order to Blackburn. Over 400 men are now employed at Canal Foundry on home and foreign orders, and on this work the firm will be fully engaged for four or five months. [13]

'FREAKS OF A PHILANTHROPIST.
DISTRIBUTES £5 NOTES AT COVENT GARDEN
A modern Haroun el Raschid is at present staying at the well-known Tavistock Hotel in Covent Garden, and his amazing acts of benevolence include free gifts of £5-notes to porters in the market. Whoever he is he hides his identity under the simple name, "W. Yates," and as his address gives Weir Cottage, Sheffield, nothing whatever is known about him, and he is variously described American oil millionaire, wealthy cutler, an eccentric landowner, and a rich bookmaker. On Monday he visited Covent Garden Market, and one man, George Mullins, in particular aroused his interest, and he promised to see him next day — that is Tuesday, he remarked that he had made his pile, and was going to do bit good for the poor of London. Sure enough on Tuesday he entered the market, but first turned his attention to a boy selling cotton handkerchiefs. He bought 2s worth, and, handing the boy a sovereign, told him to never mind the change. Throwing the handkerchiefs to a porter who had witnessed the transaction, he curtly bade him wrap them up. This the man did with alacrity, and for his trouble received also a sovereign. Then the strange philanthropist sought out Mullins. Playfully tapping a leather wallet, the mysterious Mr. Yates remarked, "Would you like a hundred pounds?", Mullins, who had witnessed the other gifts, immediately answered, Yes.” Without more ado the man opened the wallet and pulled out twenty £5-notes. "Now, what will you do with them?" he asked, retaining them in his hand. Will you see that your family has the benefit? Mullins gave the requisite promise, and the notes were handed over. The gentleman then returned to his hotel. Coming out again, he a met porter named Keefe, to whom he gave £5. Then he appears to have strolled into St. Martin's-lane, collected a score or more of old men, bade them ask no questions, but follow him as he made his way into a restaurant. There he ordered a substantial meal for each, and under every man's plate he placed a bright sovereign. His benefactions appear to have ended there, for the present at all events, though all the employes of Covent Garden Market are agog to catch a glimpse of Mr. Yates or his money.
William Yates continued his largesse on Thursday, when remarkable scenes were witnessed. Crowds of clamorous men and boys followed him about and hung on to his brougham as he drove out to give away more gold. His first call was at restaurant in Covent Garden, where picked out of his followers thirty poor children and entertained them dinner. Before leaving he handed them each half a sovereign. By this time the mob had become so great that pell-mell he was forced drive back his hotel and escape into the street again by a secret entrance. It is understood that Mr. Yates has made several large gifts to London hospitals, but he refused to discuss this novel idea his as to the distribution of gold and notes. Meanwhile men and women from all parts of London are flocking to his hotel and taking their stands, determined to see Mr. Yates if they have to wait all night. Special police have had to be told off regulate the mobs and guard against any attempt at outrage to the strange benefactor. It is stated that he is a native of Blackburn, and son of the founder the engineering firm of Yates & Thom, which was floated last year for £240,000. He is a very wealthy bachelor, and has lately given generously to local and other charities. Occasionally Mr. Yates visits Blackburn to attend tho directors’ meetings, but spends the greater part of his time in travel.'[14]