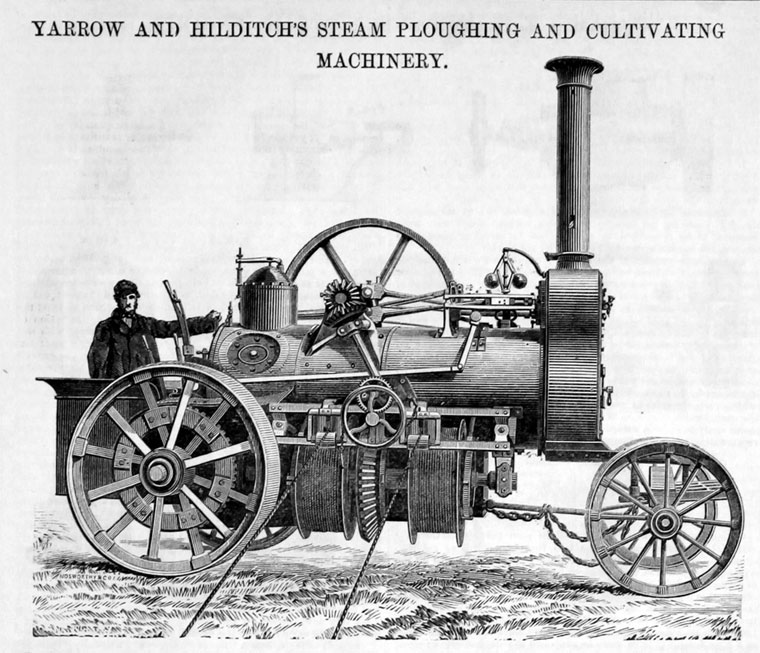 1861 Patent. '205. To Alfred Fernandez Yarrow, of Arundel square, Barnsbury, Engineer, and James Bracebridge Hilditch, of Barnsbury-villas, Gentleman, both in the county of Middlesex, for the invention of "improvements in means or apparatus used in ploughing, tilling, or cultivating land."'[1]

Messrs. Coleman, agricultural engineers, of Chelmsford, took up the manufacture and sale of the steam plough patented by Yarrow and Hilditch. The Colchester firm opened an office in London for the purpose of pushing the business and agreed to pay Yarrow a salary of £100 a year for looking after it. The royalties on the plough patent amounted in a few years to some £600, which the inventors divided between themselves.

About this time, Yarrow and Hilditch also designed and patented a steam carriage for use on ordinary roadways. The invention was taken up by a Mr. T. W. Cowan, of Greenwich, who agreed to pay a royalty on the vehicles constructed. One was built and plied between Greenwich and Bromley - a distance of 10 miles - once a week late in the evening for a short time.

1862 The 11-seater steam carriage was exhibited at the 1862 London Exhibition; it had a vertical multi-tubular boiler with a bore of 5 in. and a stroke of 9 in. The steam carriage attracted a good deal of attention at the Exhibition. It did not, however, receive any award for the somewhat peculiar reason that, though the jury deputed to deal with engines considered the exhibit to be a Carriage, the jury which had to do with carriages regarded it as an engine.

24 sets of Yarrow and Hilditch ploughing equipment were bought by the Khedive of Egypt to develop the growing of cotton.

After two years in charge of Coleman's London office, Yarrow had amassed about £1,000 capital and he felt that the time had come when he could safely set up in business for himself - initially this was Yarrow and Hedley

Messrs. Yarrow and Hilditch, of Barnsbury, near London, showed a steam carriage at the London Exhibition, of 1862, made by Mr. T. W. Cowan, of Greenwich, which is illustrated by Fig. 61. It was designed to carry thirteen passengers, including a steersman and a stoker.

A vertical multitubular boiler was employed, 2ft. diameter and 3ft. gin. high, made of steel. It was fitted with a perforated steam pipe round the top to reduce the chance of priming. The main frame of the carriage was made of ash, 4.5in. deep, lined with wrought-iron plates on each side, 0.25in. thick. To the outside of the bottom sill were fitted two iron foundation plates, to which the cylinders and other parts were bolted. The cylinders were slightly inclined, as shown, coupled to cranks outside the driving wheels; they were 5 in. diameter and 9in. stroke.

The driving wheels were 3ft. diameter, both keyed to the main axle and placed inside the framing; on the outside of the wheels came the axle bearings carrying the springs, and beyond them were keyed the over-neck cranks. The advantages claimed for this arrangement of parts were, "that the gauge of the hind wheels, being considerably reduced, did not necessitate throwing the inner wheel out of gear when turning curves; and, secondly, that direct action was obtained without having the axle cranked, which past experience has shown to be highly objectionable, as the continuous jolting very soon broke them."

In order to keep the axle in its right position, a radius link was employed in preference to axle box guides (we have mentioned elsewhere that the radius link was one of Fisher's inventions), as, by its use, far less friction was caused, and the distance between the shaft and the cylinder was unaltered, and the action of the slide valves was unaffected by the vertical play of the springs. One end of the link was connected to the axle bearings, and the other to a provision on the foundation plate. The working parts were covered to protect them from dust.

All the parts of the engine were made as light as possible, steel and malleable cast iron being freely used. When fully loaded the carriage weighed 2.5 tons, the greater portion of which was borne by the driving axle. The carriage performed well on the road.