1886.Stern-Wheel Steamer for the Nile.

1886. Torpedo boat for the Japanese Government. 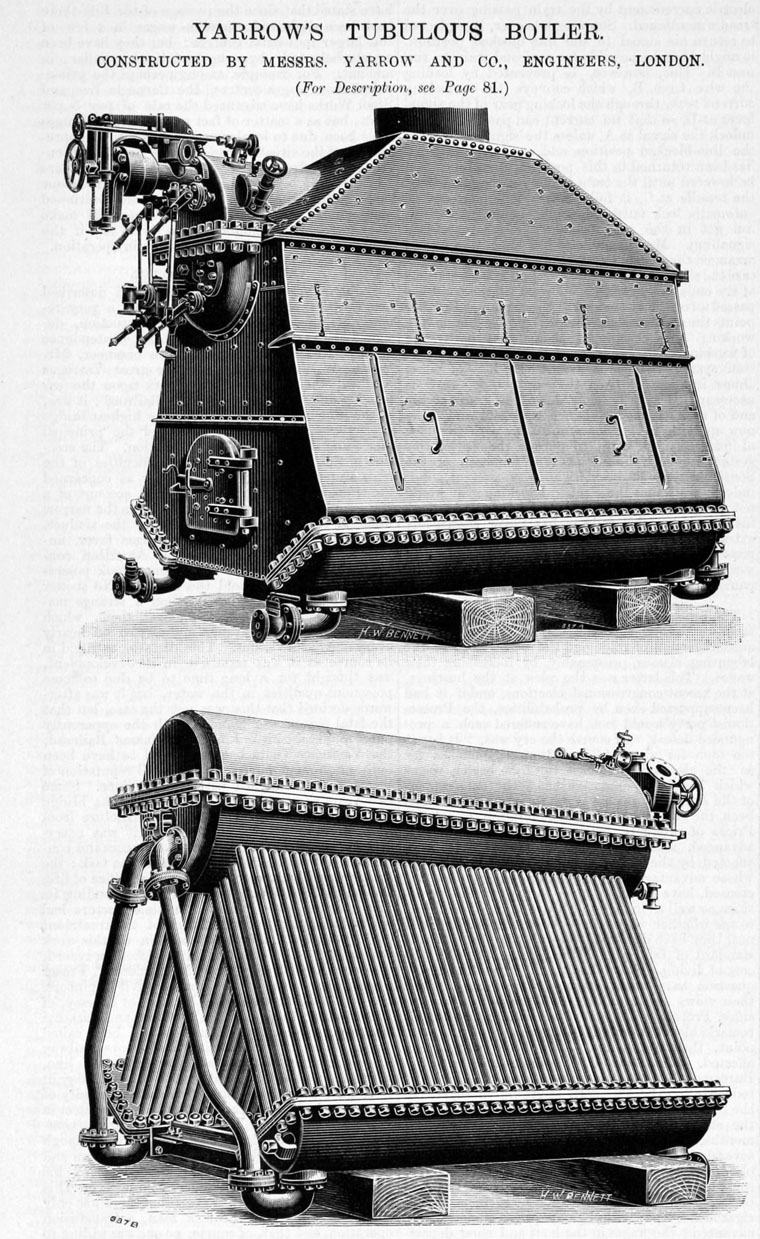 1891. Stern-Wheel Gunboat for the Russian Government.

1891. Stern wheel steamer for the Congo.

1893. Shallow Draught Steamer for the Zambesi. 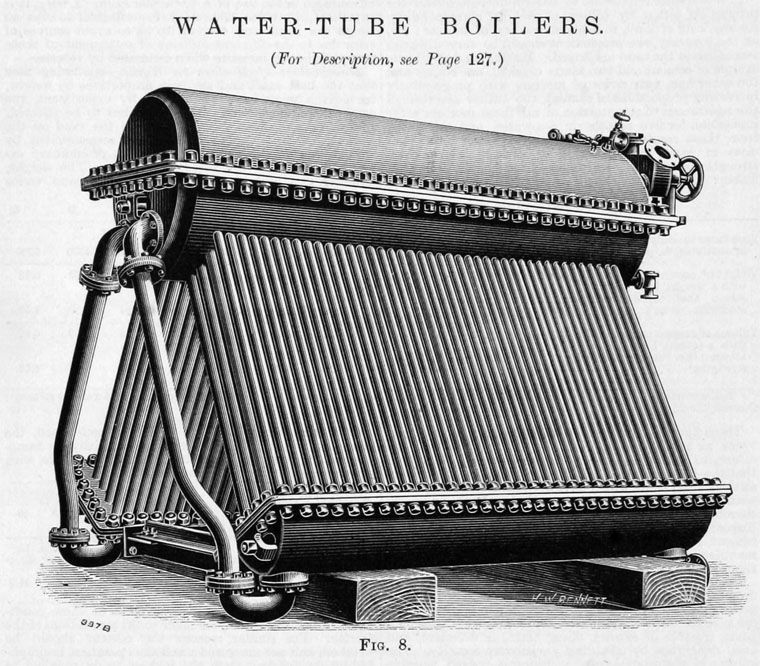 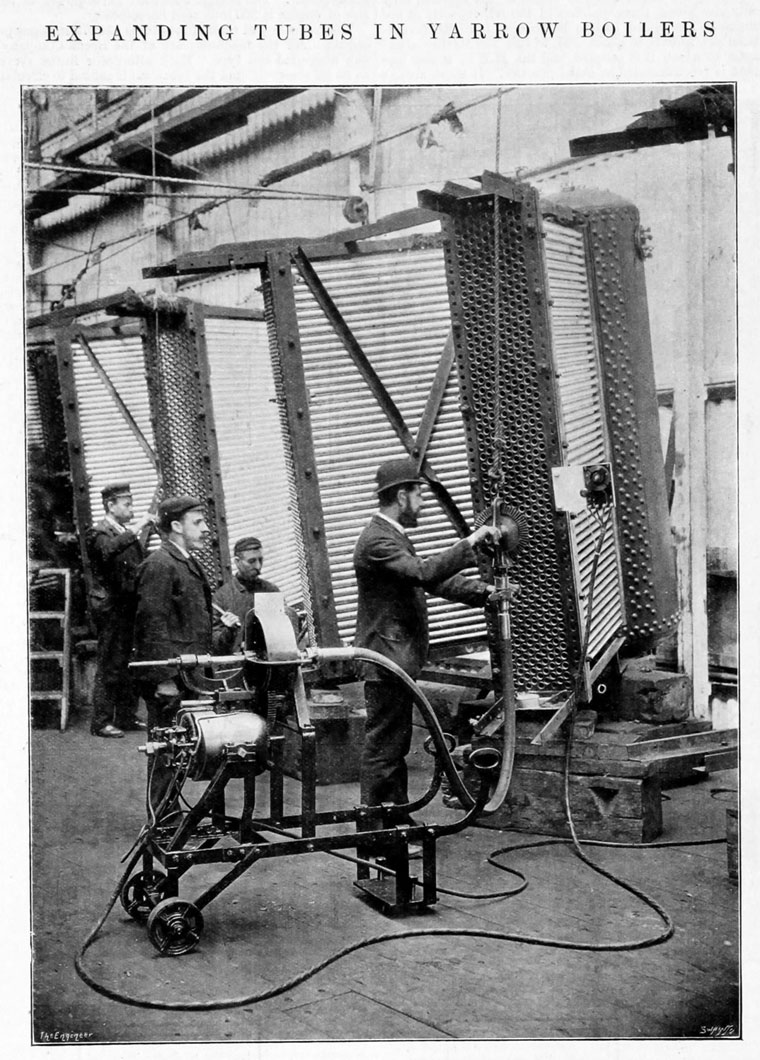 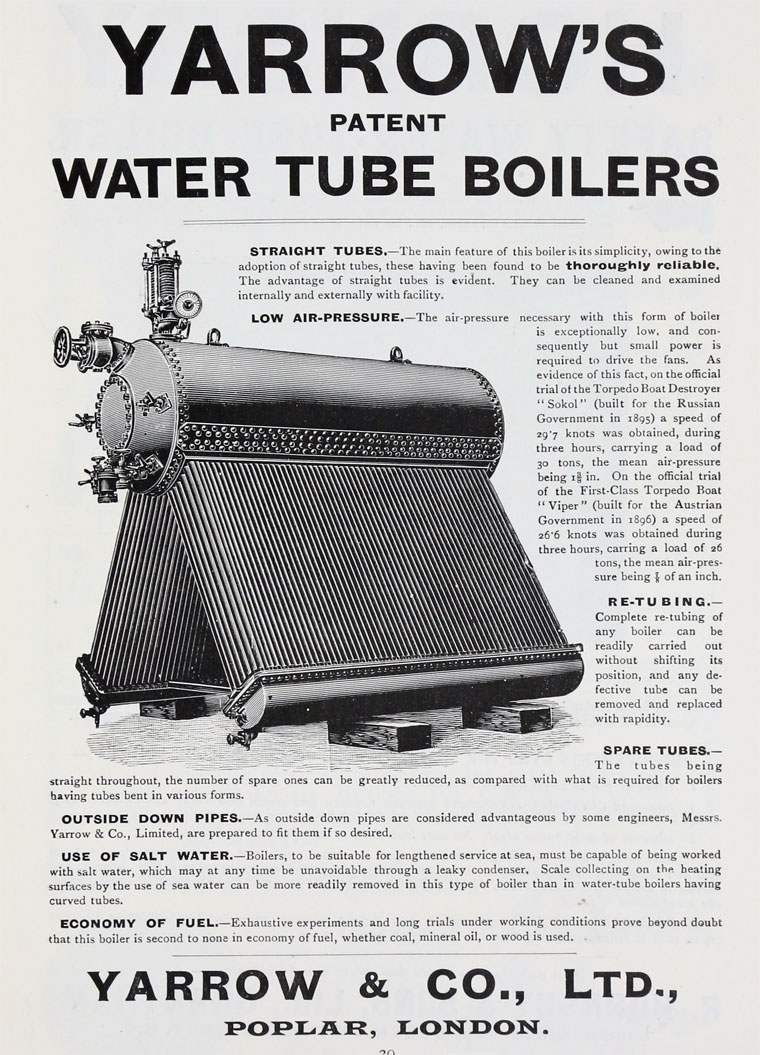 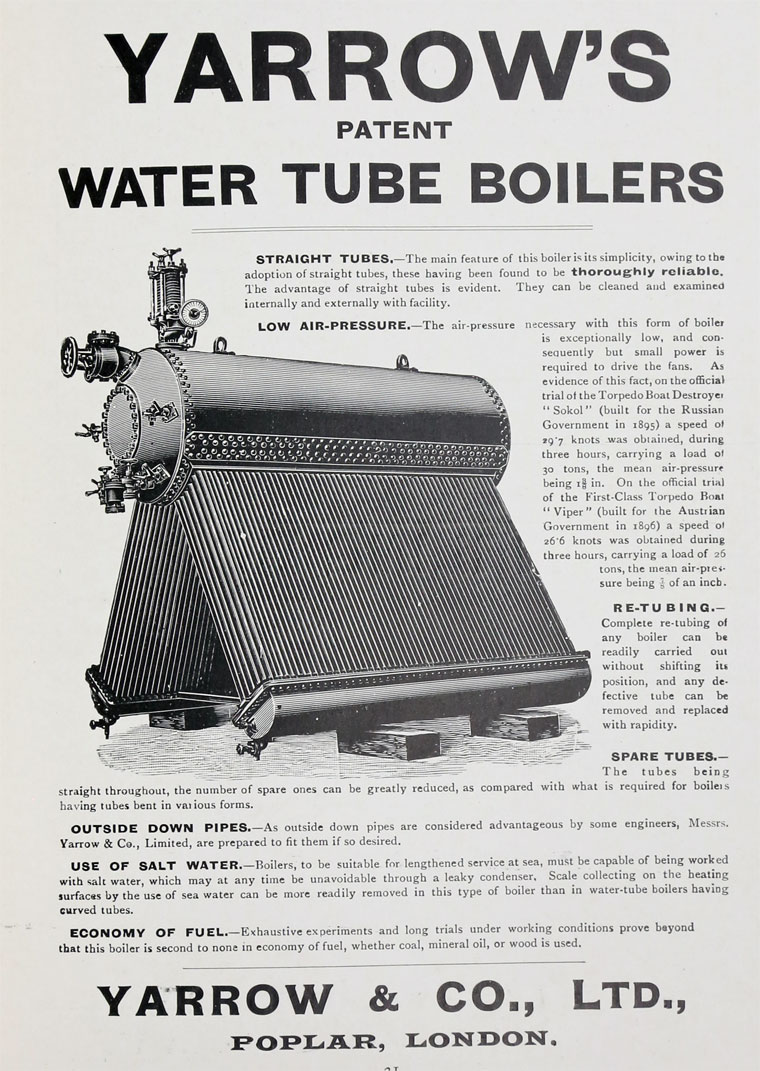 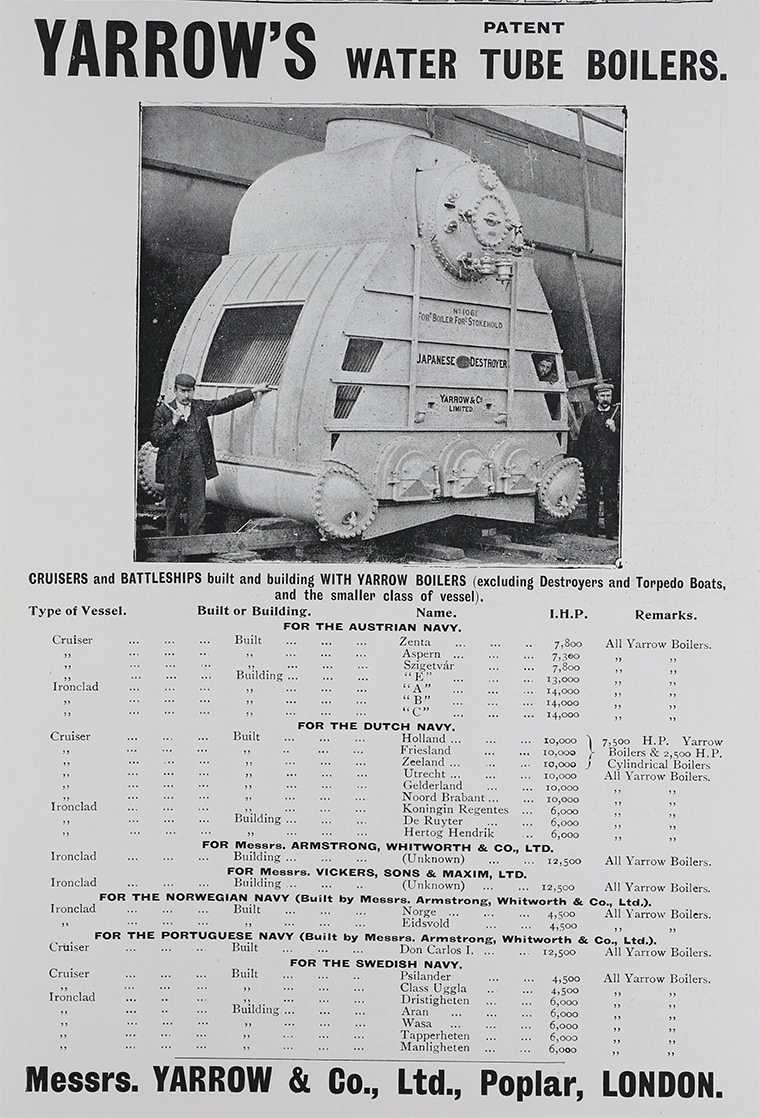 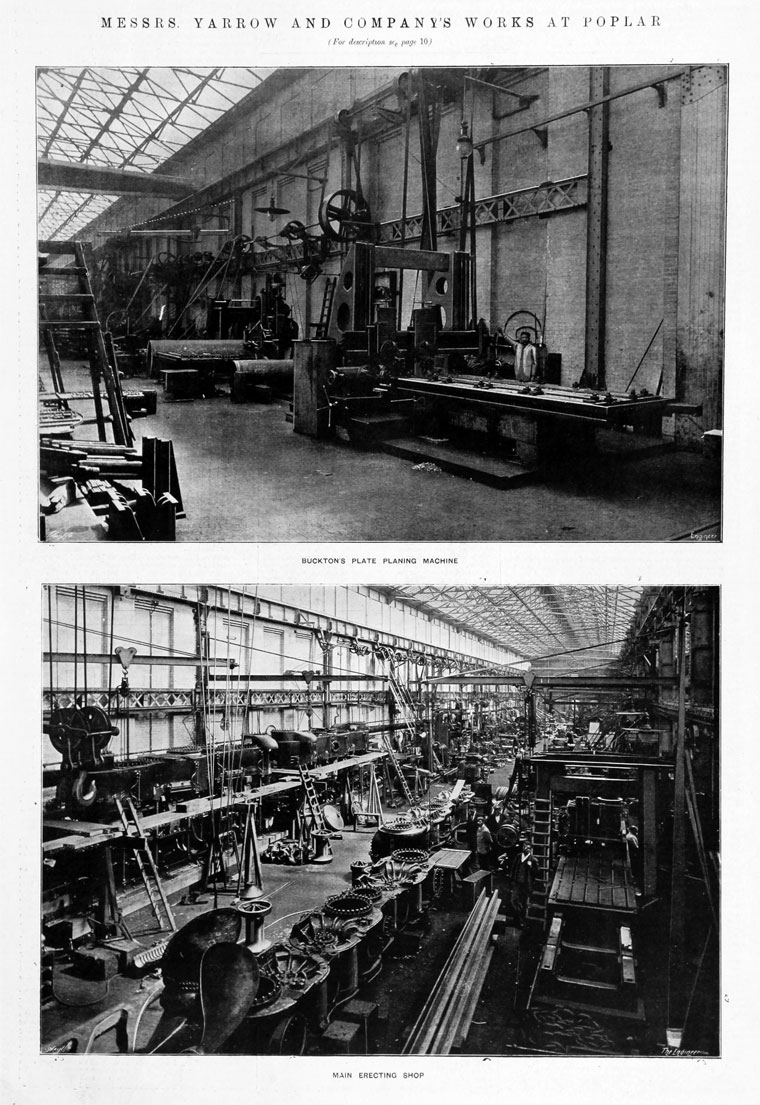 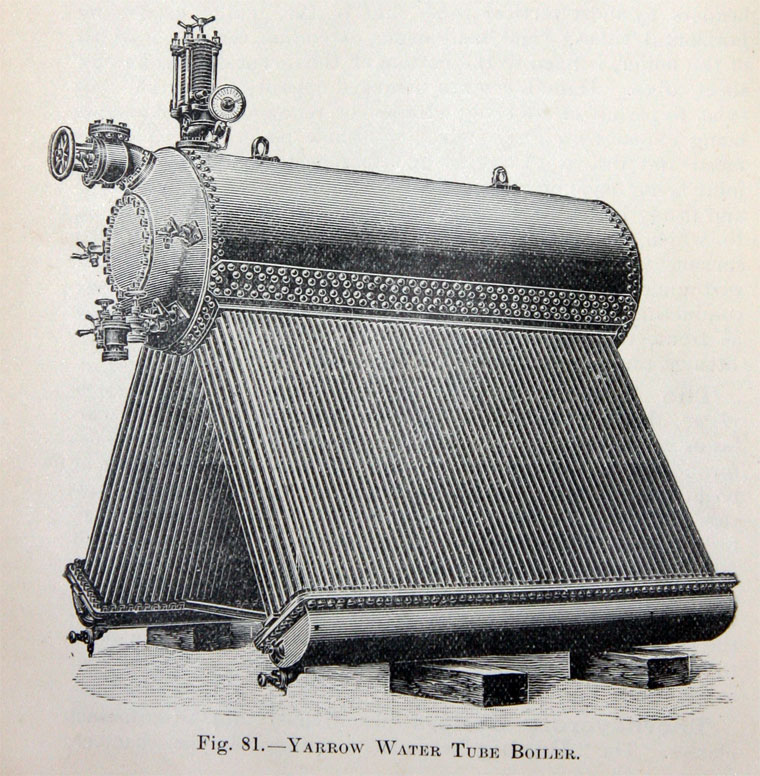 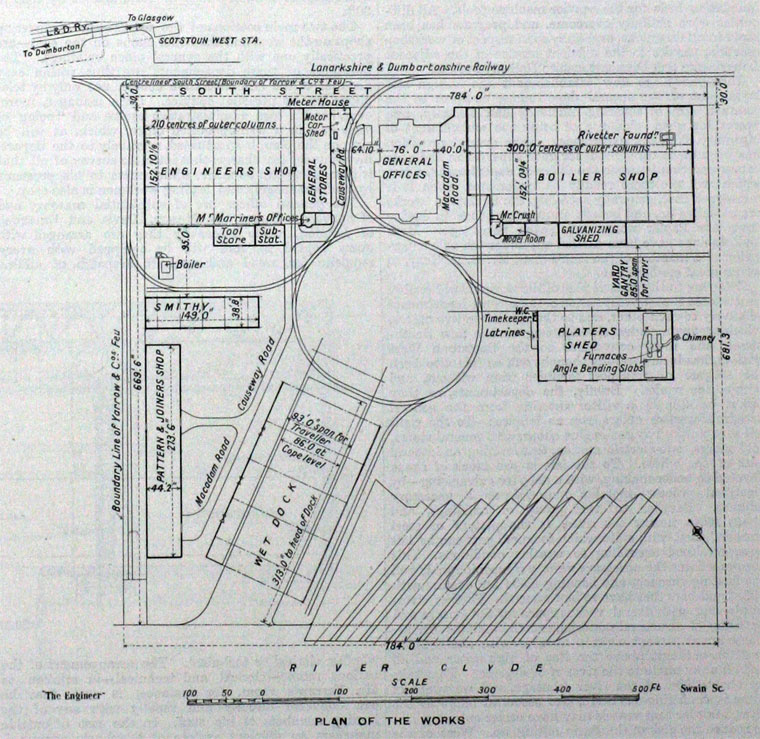 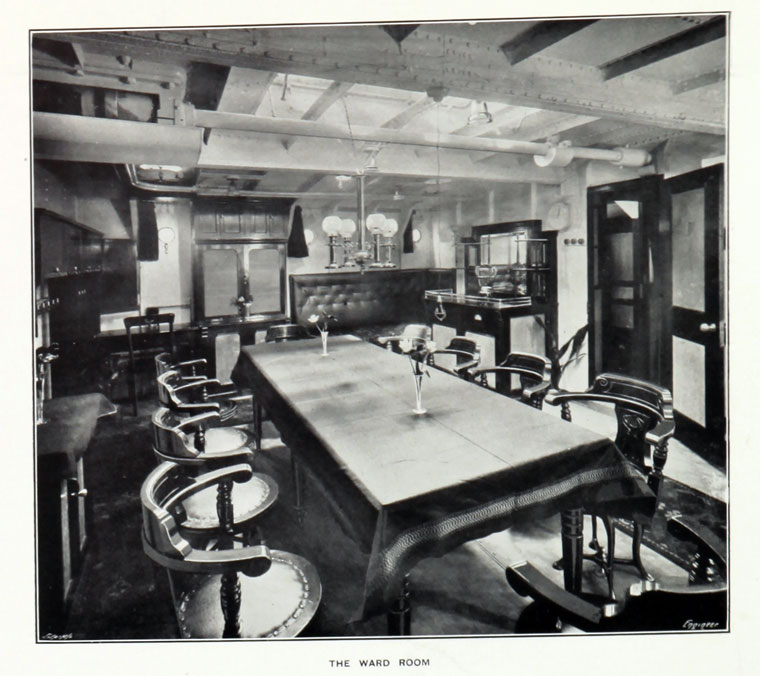 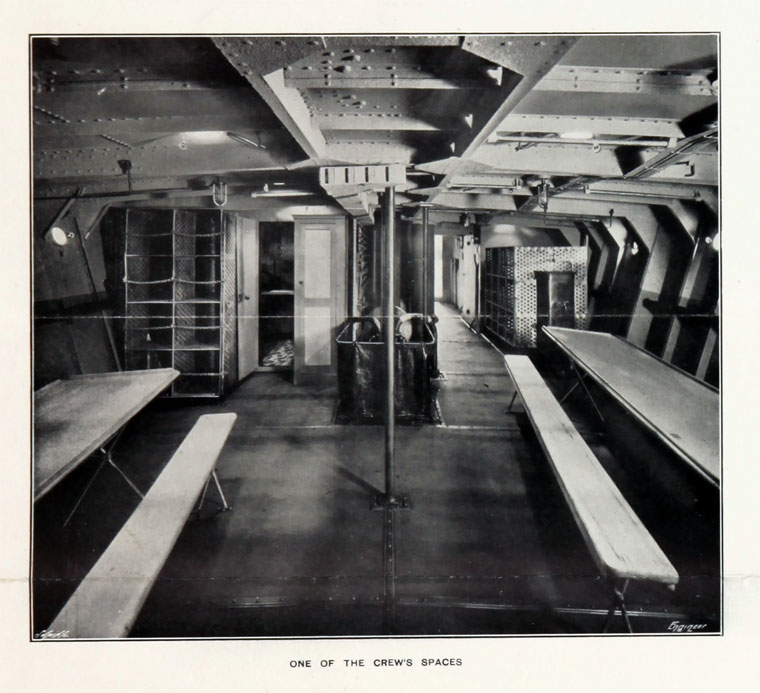 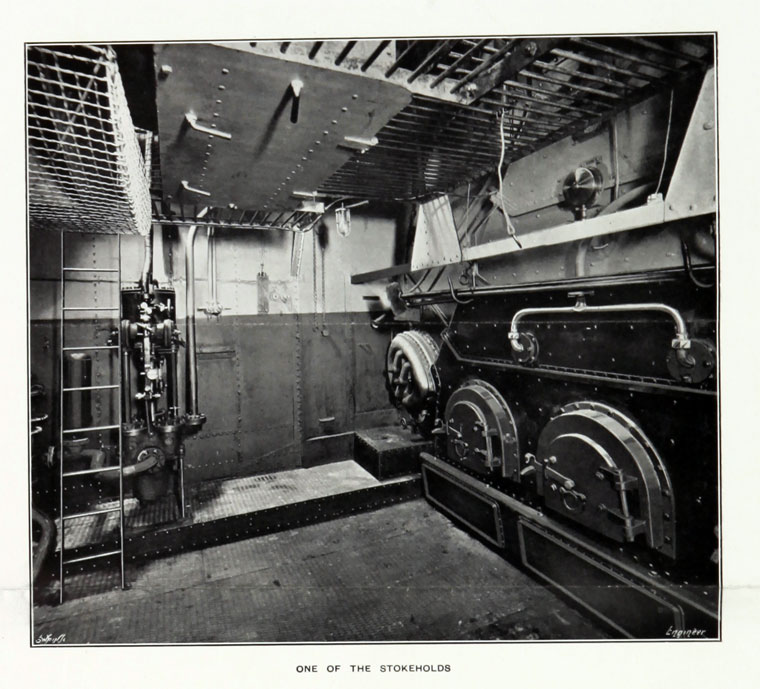 Destroyer 'Matto Grosso'. One Of The Stockholds. 1909. 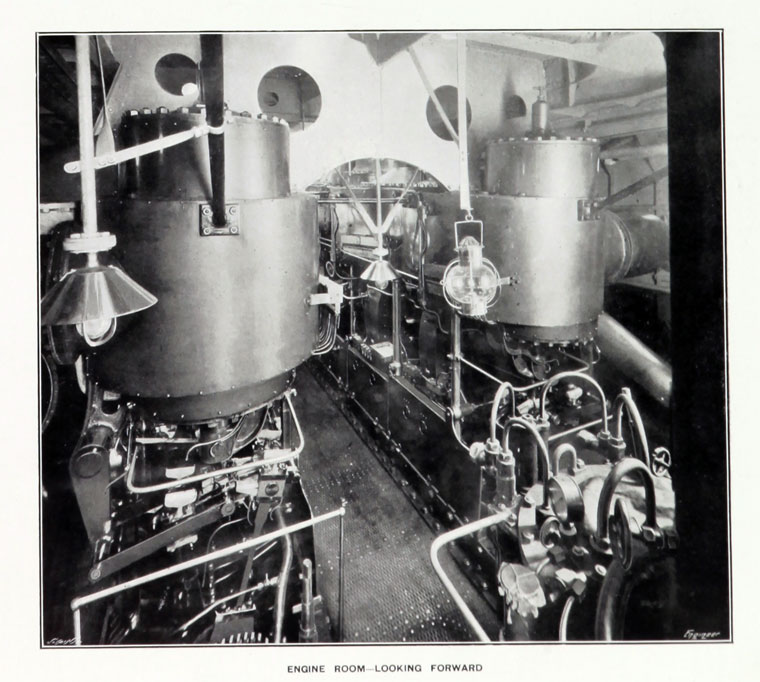 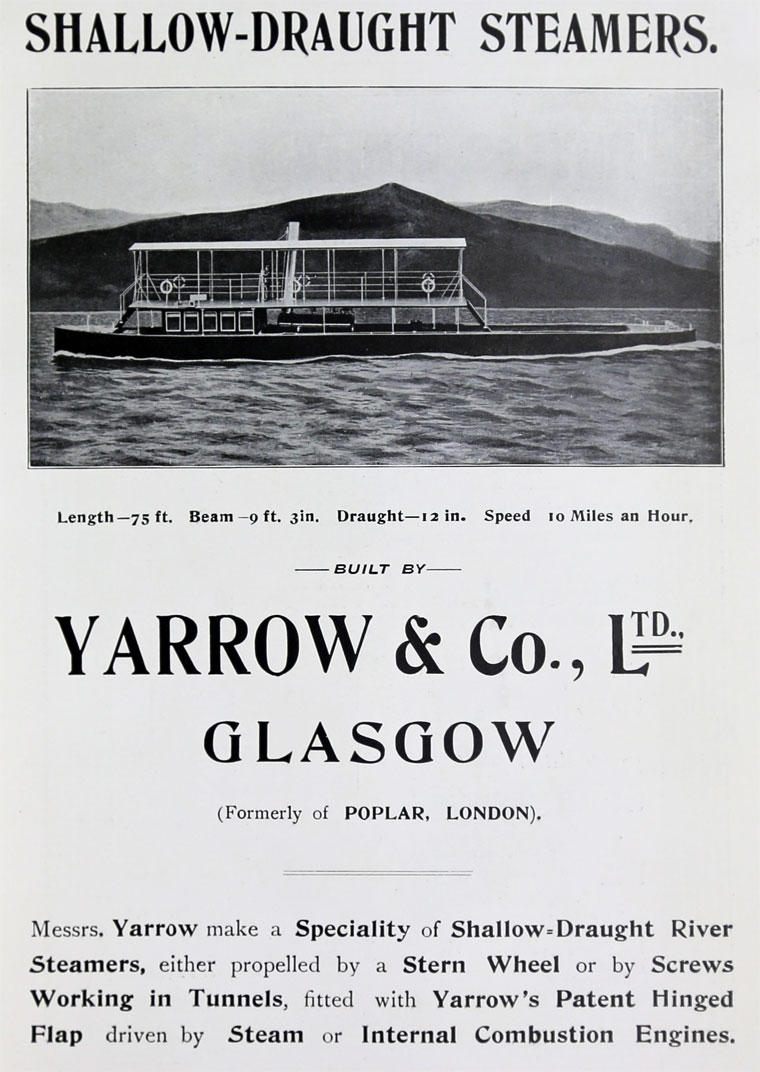 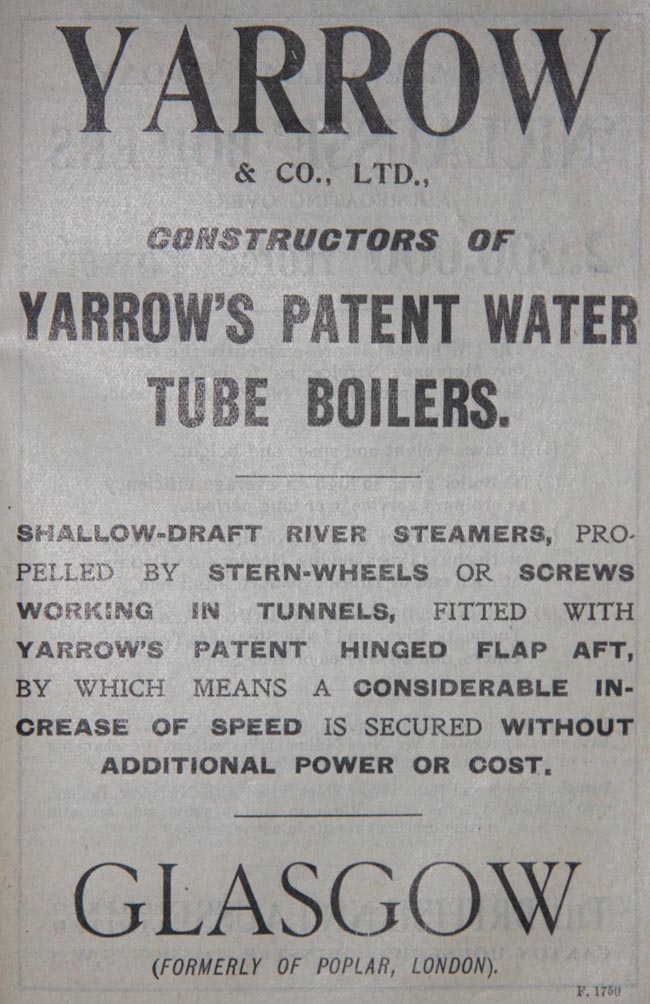 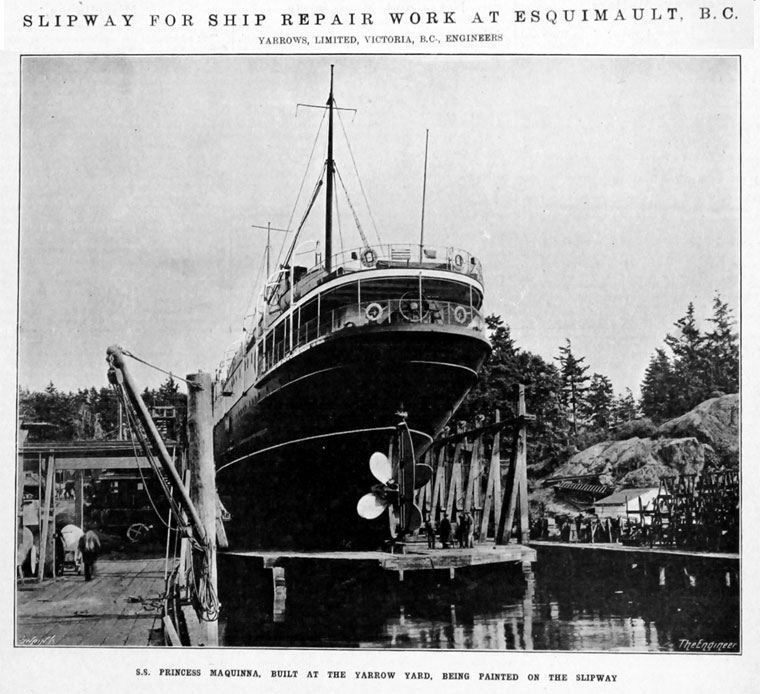 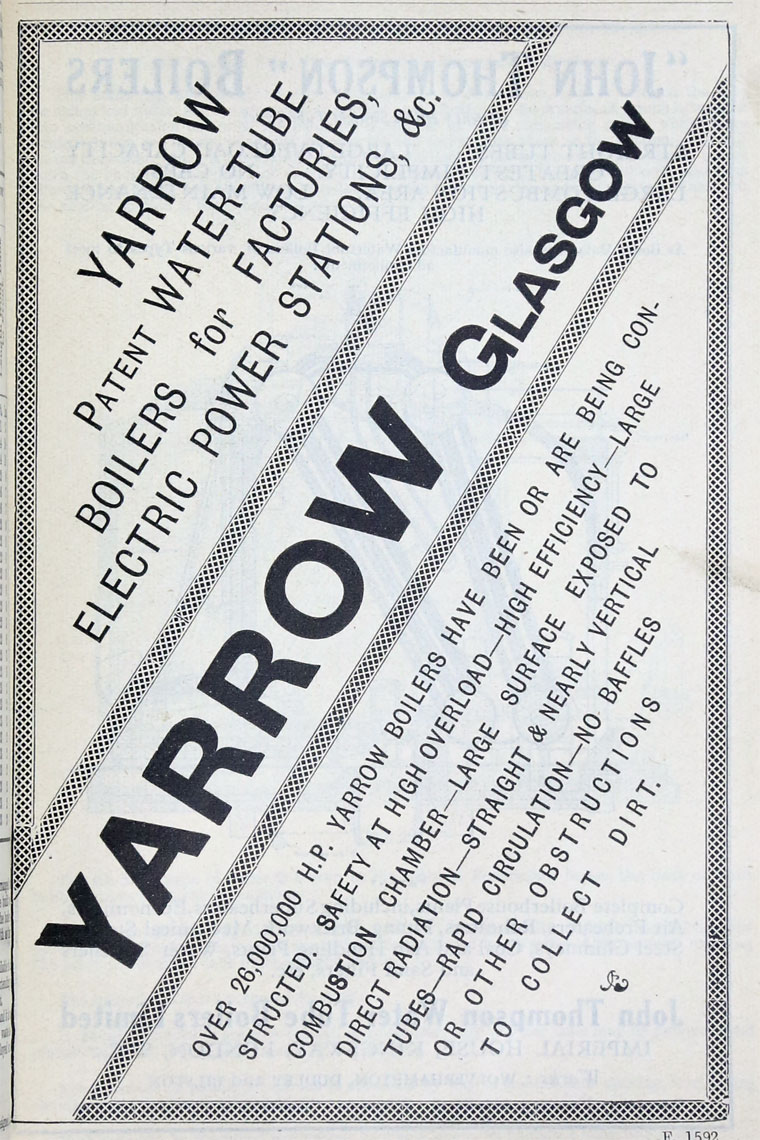 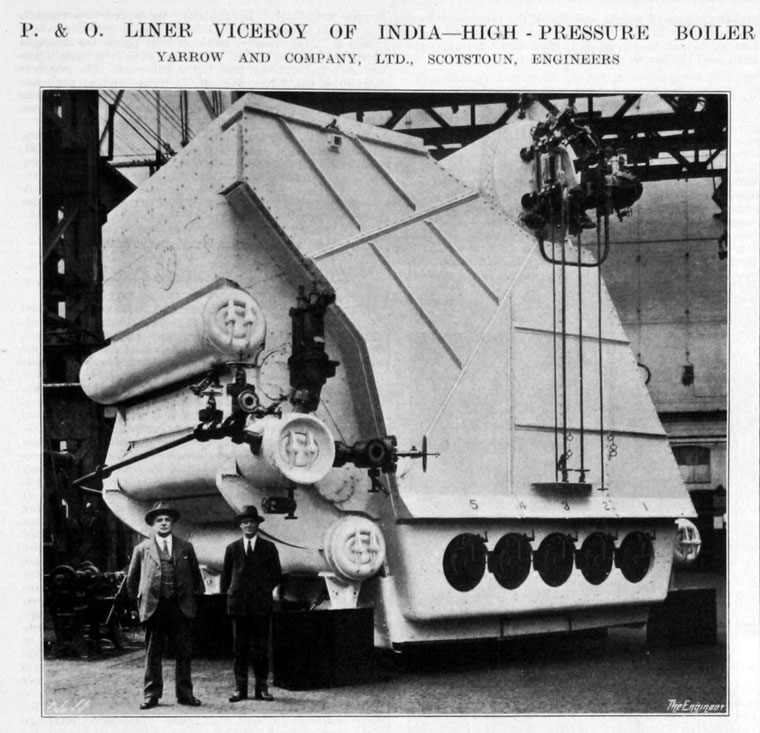 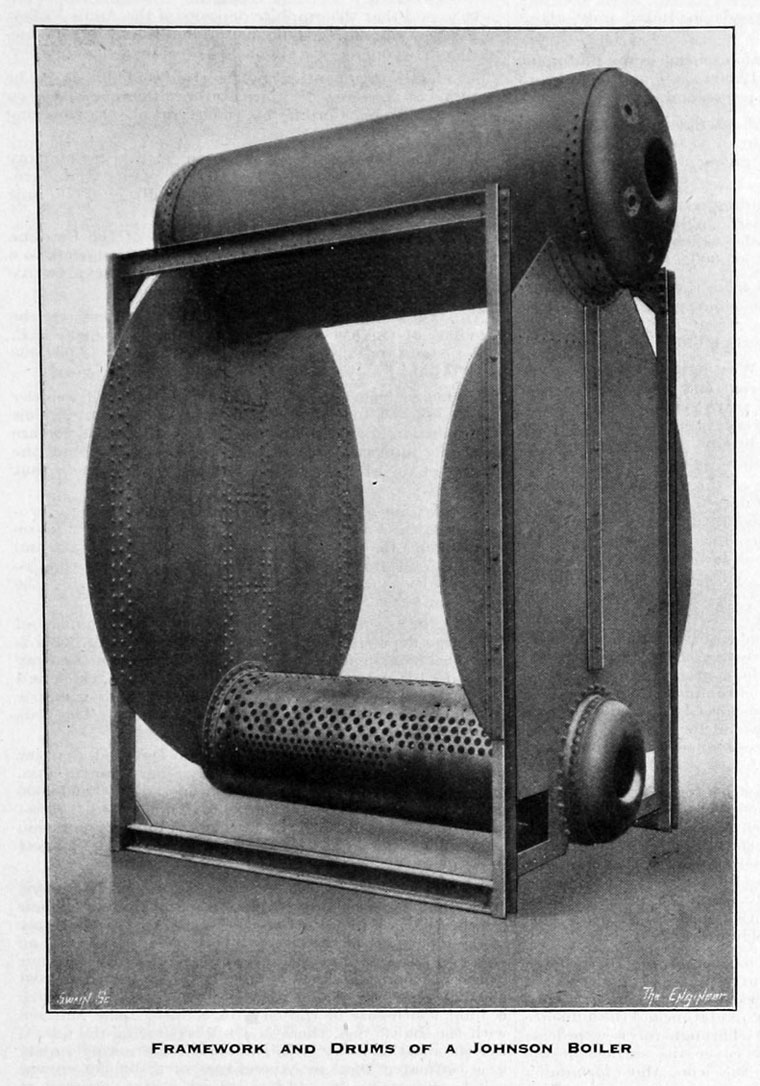 1930. Framework and Drums of a Johnson Boiler. The Yarrow company was one of the world's leading builders of Destroyers from its inception until after World War 2, building ships for both the Royal Navy and export customers. Yarrow was also a builder of boilers, and a type of water-tube boiler developed by the company was known as the "Yarrow type boiler".

1865/6 Alfred Yarrow established the partnership of Yarrow and Hedley at Folly Wall, Poplar on the Isle of Dogs to build steam river launches.

1870s Built torpedo boats for the Argentine and Japanese navies

1875 The Hedley partnership was dissolved; the company was then known as Yarrow and Co

1890 Built gunboats for the Zambesi and Shire rivers. Details and illustrations in 'The Engineer'. [3]

1892 built two destroyers for the Royal Navy: Havock and Hornet.

1894 Description and illustrations of their works on the Thames. [4]

1898 moved out of Folly shipyard to the nearby London Yard

1903 or 1904 Inverted vertical triple expansion rotative engine built at Poplar for the Metropolitan Water Board (Wanstead Station). Maintained in superb condition when photographed by George Watkins in 1954. Cylinders 20", 32" & 53", 3' 6" stroke [5]

WWI As the First World war began, the company enjoyed an advantage in that it had already begun manufacturing ships for the military. It was able to begin mass production and at its peak the yard employed over 2,000 workers. The yard was able to make 29 destroyers, 16 gunboats, a submarine, three hospital ships and a floating workshop for the Navy.

1918 The yard began courting merchant orders and built yachts, cargo ships and coasters. River steamers were also made for Chinese use too.

1922 Sir Alfred Yarrow on account of his advanced age over 80, decided to retire from chairmanship of the company. The firm went into voluntary liquidation with Mr Harold Edgar Yarrow as liquidator and succeeding chairman. The company Yarrow and Co (1922) was formed.[8]

1922 Alfred Yarrow's son, Harold Edgar Yarrow, moved the yard towards producing water-tube boilers for power stations and industrial uses. The yard was reopened with a much reduced staff of 24 to begin doing this.

1930s The military build-up continued and more orders came in from the Royal Navy for ships to meet this demand. In the late 30s Yarrow also began operating two overseas yards in British Columbia and Yugoslavia.

1941 The yard was bombed and badly damaged. 47 shipyard workers were also killed.

1945 After the war, the yard returned to making merchant ships and the ten years after the war was an extremely busy time for them. The Company made shallow-draft craft for countries all around the world. These were shipped out in parts and reassembled at their destination.

c.1947 a Research and Development Department was established; this became known as the Yarrow-Admiralty Research Department.

1950s The Admiralty continued to be a key customer for the yard, ordering frigates and seaward defence boats.

Late 1950s: research into the application of nuclear power to marine uses.

1966 Yarrow (Shipbuilders) Ltd came into being in 1966, as the yard was expanded. In the 60s the yard continued with merchant orders making three survey ships and then 'Leander' class frigates.

1974 Yarrows was purchased by GEC

1977 The government passed the Aircraft and Shipbuilding Industries Act which nationalised YSL and grouped it with other major British shipyards as British Shipbuilders. They continued making Type 22 frigates, 16 of which were made between 1979 and 1994.