Grace's Guide is the leading source of historical information on industry and manufacturing in Britain. This web publication contains 146,041 pages of information and 231,559 images on early companies, their products and the people who designed and built them. 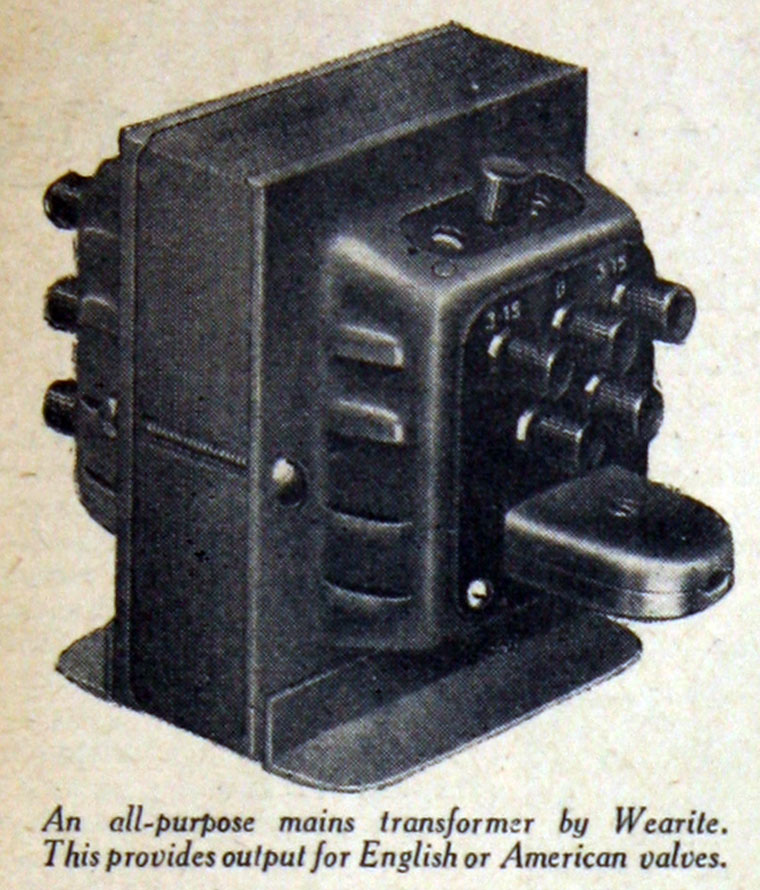 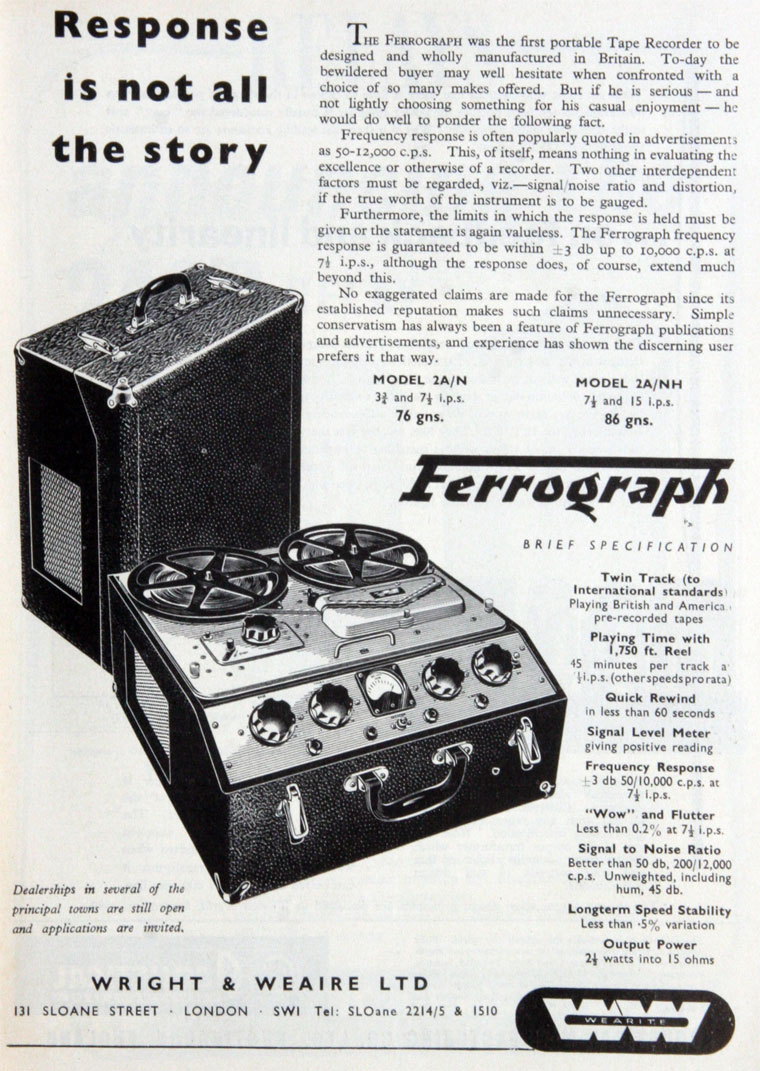 1920 Incorporated as a private company for purposes of acquiring the instruments business of Messrs J. G. Wright and T. G. Weaire

1922 Wright and Weaire, or WW as they became known, started manufacturing radio components from a factory in Tottenham, London.

1928 Richard Merrick started work with Wright and Weaire as a tester and inspector of components.

Another young man who started at Wright and Weaire in those early days was Ernest Niblett. Acknowledged as the "Architect" of the company's post-war success, he later became joint managing director with Richard Merrick.

1933 Wright and Weaire began importing a new design of super-heterodyne coil for radio tuning systems from Gabriel Suchestow of Vienna. The demand from amateur radio enthusiasts for these products was such that a small factory was set up to manufacture them in the UK. Gabriel Suchestow sent over his nephew Theodor Kolb to take charge commercially and their chief engineer George Nissen to supervise the engineering and production of the product.

This enterprise was a great success and everyone concerned prospered from the venture. However, Theodor Kolb was recalled to Vienna and George Nissen left the UK when rumours of European unrest became rife.

1935 Merrick had achieved the position of Sales Manager.

WWII. From 1940 to 1945, Wright and Weaire manufactured a range of plugs and sockets that went into the making of the "Williamson" Aircraft Cameras, in addition to a vast number of parts for war planes including the De Havilland Mosquito [3]

Post-WWII. By the end of the war Joseph Wright and Thomas Weaire announced their decision to retire and offered the company to Richard Merrick, Ernest Niblett and Walter Berridge (the company secretary) on advantageous terms and they accepted this offer without hesitation.

1945 Started to transfer production from Tottenham to a bigger factory at South Shields; the move was complete within a year. The closure and sale of the Tottenham factory produced a number of problems. None of the senior management from Tottenham wanted to move from London to the North East. As Wright and Weaire had always produced their own machine tools, this proved quite a problem. This set-back was overcome to some extent by setting up a small tool-making and component factory run by Wright and Weaire's two top designers Renard and Dare, who were made Managing directors and from whose names the company of Rendar was founded. Rendar manufactured high quality plugs and sockets for the electronics industry.

The end of hostilities also put demands on many companies to find new markets, and put into use the advances in technology that often result from research done for military purposes. Miniaturization and tropicalisation were two of the things that WW had been involved in during the war, and which became standard practice in products from then on. The government of the day impressed on every manufacturer the need to produce goods for export to earn money that would enable Britain to be rebuilt after a costly war effort.

This resulted in Mr. Merrick paying a visit to Paris, where French manufacturers, who had been in similar markets to Wright & Weaire, were producing new products of advanced designs. One of these manufacturers was "Bobinages Renard" with whom the exchange of certain processes and designs were negotiated. An exchange of visits by English manufacturers to French counterparts and by the French to English factories resulted in exhibitions of their manufacture in both London and Paris.

1947 During one of these exhibitions Richard Merrick was introduced to an American named Louis Fishoff, who had the foresight to recognize the importance of tape recording as a new growth market, and finally succeeded in convincing Richard Merrick to investigate the possibility of producing a tape recorder.

Louis Fishoff's insistence was such that Richard Merrick passed his thoughts onto Ernest Niblett, who confessed that he had been interested in this technology for some time, so the decision was made then and there to pursue the matter immediately. The result, the Wearite Tape Deck. A factory was established at South Shields; a team of six technical engineers was engaged and, by the middle of 1948, the first Ferrograph recorder was produced

1949 A separate private company for marketing tape recorders was established, the British Ferrograph Recorder Co Ltd, owned by the same shareholders as Wright and Weaire[4]; a team of six technical engineers was engaged and, by the middle of 1948, the first Ferrograph recorder was produced.

Ultimately, Rendar moved to a new 20,000 sq. foot factory in Burgess Hill, Sussex, were they prospered for many years.

1950 Patent - Improvements in and relating to recording apparatus.

1955 converted into a public company; acquired the share capital of Ferrograph; 310 employees[5].

1958 The name of the company was changed to the Ferrograph Company Ltd; manufacturing activities transferred to a new subsidiary Wright and Weaire Ltd[6].

1959 A majority holding in the Ferrograph Company Ltd was acquired by the Wilmot Breeden Group [7] and it was decided to add to their hi-fi range with higher powered amplifiers, radio tuners and monitor loudspeakers.

1959 After the death of Renard, the Ferrograph Company acquired Rendar Instruments[8].

Production of the Ferrograph range continued unabated until the late 1960's.

1977 Falling sales resulted in heavy financial losses for the company. In order to safeguard jobs the National Enterprise Board arranged a marriage between Ferrograph and North East Audio Ltd (NEAL). Wilmot Breeden sold the Ferrograph company for £500K. Other parts of the Wilmot Breedon were also in trouble. In January 1977, the Wayne Kerr division went onto a 3 day week "due to a run down in orders". Although short-time working at Wayne Kerr only lasted for 3 months, but the electronics division made losses of nearly £500k due partly to Ferrograph and partly to Rendar.

NEAL took on the production of the whole product range except for the ARA1 cathode ray tube response unit.

1981 The company passed into the hands of the Receiver.