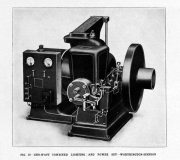 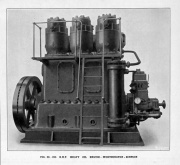 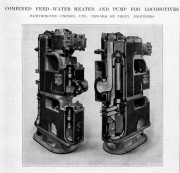 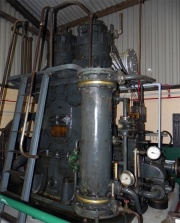 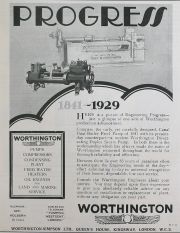 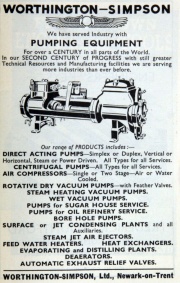 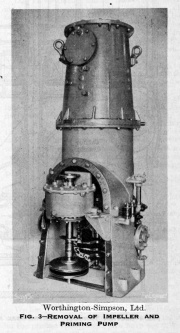 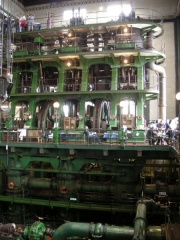 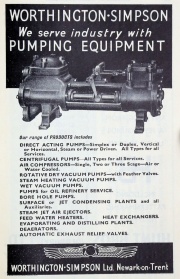 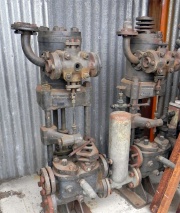 1839 The company was Simpson and Co, operating from Belgrave Road.

By 1842 it had become William Simpson and Co.

By 1860 it was J. Simpson and Co, and had moved to a new factory by the Thames at 101 Grosvenor Road, Pimlico.

1885 An order for high pressure pumps to supply the British Army in Sudan with water was awarded to the Worthington Pumping Engine Co; this caused an outcry which brought the matter to the notice of Simpsons who secured sole rights from the Worthington Pump Company of the USA for manufacture of Worthington pumps[3].

1892 James Simpson and Co was incorporated as a public company[4].

1917 Name changed to Worthington-Simpson Ltd when control passed into the hand of American associates.

1926 Secured the order for a surface condensing plant for the 15,000 kilowatt turbo alternators installed in the Leicester Corporation electricity station at Freemans Meadow.[6]

1936 The company left Grosvenor Road, and the works were demolished[7]

1936 Preference shares issued to enable repurchase from the American parent; agreements were put in place to continue connections with Worthington Pump and Machinery Co of Richmond, VA, USA[8].

1945 Advert. Pumping equipment. Supplying for over a century

1969 US company Studebaker-Worthington Inc took over the company after battle with Weir Pumps[11]. Weir Group subsequently acquired 50% of the equity of a new JV company Worthington Weir which would handle international sales of the products of the 2 parent companies[12]