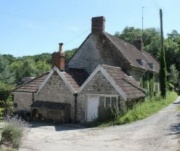 This was one of several mills served by the River Chew between Pensford and Keynsham. It was downstream of Woollard Mill and upstream of Compton Dando Mill.

It was a tucking mill in the 16th century, after which it housed two grist mills. In 1736, it was leased by John Light from the Popham family as brass battery mills. By the 1790s it was derelict. In the early 19th century it was briefly used as a tannery before reverting to a grist mill which was used up to WW2.[1]. In fact the use of the mill for brass battery work has recently been found to have started earlier than 1736, with records of activity in 1711[2].

1820 Mill advertised to be let, 'lately used as a leather mill, and now fitted up with stocks, furnaces, &c. for that purpose.'[3]

The 1883/1885 25" OS map shows a group of buildings identified as 'Woodborough Mill'. These are present today. The appearance of the largest one (Photo 1) is consistent with an 18thC. water mill (and the old map shows a large leat passing under it). The building is now a house named Woodborough Mill, and there is an adjacent older house at more or less at right angles to it (Photo 2). The map shows the headwater running from a weir located 200 yds north of the mill. This waterway is no longer visible, but the tailrace can still be seen. The old map shows a footbridge immediately upstream of the mill, leading to a rectangular building (which survives in a farmyard as a stable-type of building).