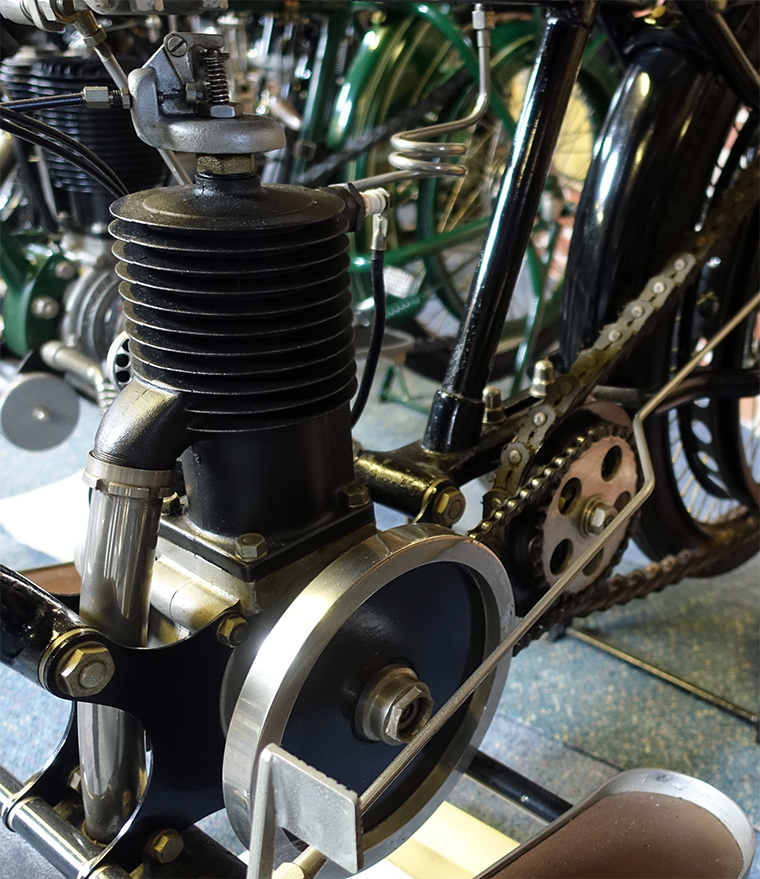 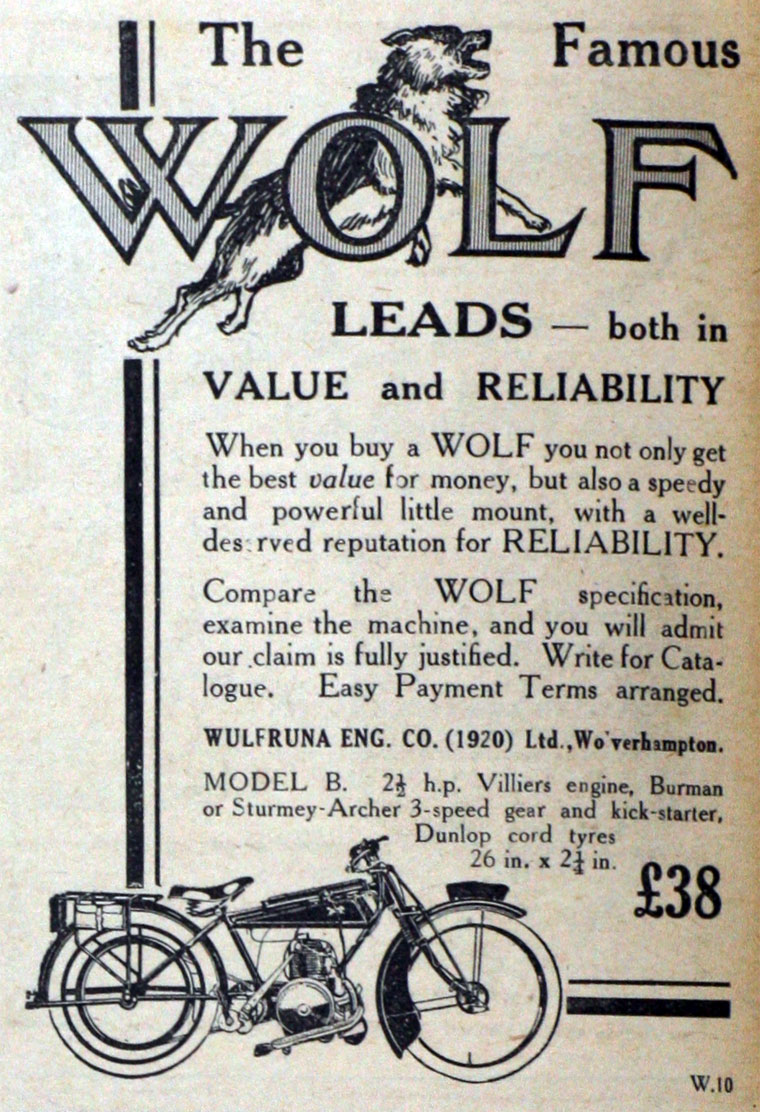 Wolf were motorcycles produced from 1903 to 1940, by Wearwell Motor Carriage Co of Wolverhampton. This model took over from others, produced by Wearwell and its subsidiary, Wulfruna.

1903 Late in the year the company began to use the Wolf name on the Wearwell Motette forecar, when it was revised to use an 3.5hp water-cooled Stevens engine with chain drive to a Bowden rear-hub with clutch.

1905 A redesigned and sturdier model was launched using the Wolf name. It was fitted with a 3.25hp Stevens engine, which was vertically mounted near the bottom bracket.

From this modest start came a good range of singles and V-twins, using Stevens engines ranging from 2.5hp to 5hp. These were fitted to solos, forecars and even a three-wheeled car, which they built for a couple of years.

By 1906 there were more than a dozen models, and a wide range of engines to choose from. Prices ranged from 37 to 42 guineas (£38.85 to £44.10). Lightweight, heavy duty, and commercial versions of the powered tricycles were also produced. The lightweight version was like the original Motette, except that it included a 4.5hp, or 5hp, water cooled, vertical twin engine. It had a two-speed gearbox, a leather saddle, and sold for 75 guineas (£78.75). The heavy duty version was more like a car. It had body panels, and was fitted with a steering wheel. It had a 7hp or 8 hp, water cooled, vertical twin engine, a three-speed gearbox and clutch. The cheapest version sold for 100 guineas (£105).

The cheapest machine was the Wolf featherweight, which was similar to the earlier powered bicycles and sold for 19 guineas (£19.95); it had a 1.5hp Stevens engine mounted inclined, high up in the frame with belt drive over a jockey pulley. Stevens also started to supply the company with frames, and the company sold the Stevens 1.5hp motor set, complete with all parts for £14. The Stevens brothers also started to ride Wolf machines in reliability trials and speed events with great success. The heavy duty vehicle, the Wolf Carette, was more like a car. It had body panels, and was fitted with a steering wheel.

1911 The Wearwell Company had to be liquidated but William Clarke still wanted to producing Wearwell bicycles, so he purchased the ailing Wulfruna Cycles. He attempted to revitalise the business and reintroduced the Wearwell and Wolf names at new premises in Brickkiln Street. The production of cheap machines continued, as a 2.5h.p. Wolf was on sale in 1914 for just 22 guineas (£23.10).

1911 The range was limited to three singles, all with Stevens engines.

1912 There was a V-twin fitted with a Moto-Reve engine. That year the company also advertised machines using Arno engines and Thornton two-speed gears.

1913 Late in the year the Wolf name reappeared; the machines were using JAP as well as Arno engines, an Illston for the 2.5hp model, and a variety of transmissions, many with chain drive.

Post-War. The range continued in reduced form, with just a 269cc Villiers two-stroke model. This was soon joined by a 292cc sv JAP model, plus two machines with 348cc and 545cc sv Blackburne engines.

Early 1920s: A range of Wulfruna machines was available until the early 1920s, after which the company concentrated on its Wolf trademark.

In time the range increased, with changes every season until the mid-1920s, mostly with chain-cum-belt transmission.

1924 By now, all-chain drive and three speeds had been introduced on some models. There were also ohv sports models with Blackburne engines.

1925 A 172cc Villiers sports model arrived and stayed in the range for a few years.

1927 The sports model was accompanied by two variants with 147cc Villiers engines. All the four-strokes had gone.

1928 The brothers Theo and G. A. Waine took over the Wearwell Cycle Co Ltd from the liquidators of the Wulfruna Engineering Co Ltd. The Waine Family were lock makers in Willenhall, and used to supply large numbers of locks to the far east. They also used to make steel heel tips for shoes, and supplied them to the army in the first world war. They used to import their steel from Belgium, and in those days it only cost £4 a ton. The Brickkiln Street works were not suitable for their purposes so the cycle business was moved to the family's New Griffin Works in Colliery Road. Part of the works was occupied by the cycle company, the remainder was occupied by the family's other business, Vulcan Engineering Co.

1928 Production fluctuated on and off, and then ceased.

1931 The factory expanded; the production of Wolf motor cycles recommenced and a trade stand was taken at Olympia. Mr. H. V. Waine, a keen motor cyclist, was responsible for the design and production of both motor cycles and cycles, while Mr. T. A. Waine was responsible for sales. The first machines used Villiers engines. The Cub, which had a 98c.c. engine sold for only £15.15s.0d. (£15.75) The Wolf Silver Super Sports was powered by a 196c.c. Villiers engine. This sold for only £34.

1930s From there they expanded their range to add 98cc, 122cc, 148cc and 249cc engines at various times, and built lightweight models throughout the decade.

WWII Production of Wolf motorcycles ceased at the outbreak of World War II. After the war the company decided to concentrate solely on the manufacture of pedal bicycles, and so motorcycles were no longer produced.