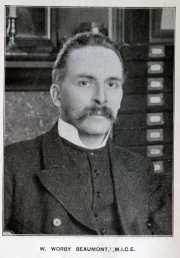 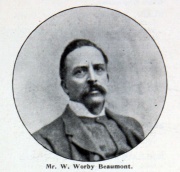 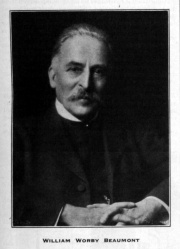 On completing his schooling he was apprenticed with the Reading Ironworks Co.

He subsequently joined Ransomes and Sims as an Improver, and after five years with that firm, became Assistant to Robert Mallet.

On leaving Mr. Mallet he was appointed joint-editor of The Engineer newspaper, and remained on their staff for some ten years. Since 1896 he had been in practice as a Consulting Automobile and Mechanical Engineer, and was latterly Technical Adviser to the Metropolitan Police, as well as Hon. Consulting Engineer to the Royal Automobile Club (RAC).

1904 'BEAUMONT, W. Worby, M.I.C.E., M.I.M.E., &c., &c., Outer Temple, 222, Strand, London, W.C. Car: None at present. Hobbies: Cycling, orographic geology, and physical and mechanical experiment. Supports motoring for the improvement in the conduct of traffic of all kinds on roads; the development of a great national industry, and the recovery of the premiership of the United Kingdom, in the construction of mechanically-propelled vehicles. Is a practical engineer. Has carried out extensive experiments in steam condensation, and in connection with steam, oil and gas-engines. In 1898 was President of the Society of Engineers. Is the author of "Motor Vehicles and Motors." Is Hon. Consulting Engineer to the A.C.G.R. & I., and has been a judge of motor vehicles at all the important exhibitions and trials from 1896 to the present time'. [2]

Mr. Worby Beaumont was a member of the Cycle Engineers' Institute, and on the formation of the present Institution of Automobile Engineers became one of the original Members of Council and subscribers to the Memorandum of Association. He took an active part in the Institution's early work, and retained his interest in its affairs throughout.

BEAUMONT, W. WORBY, M.I.C.E.- Born in 1848, and apprenticed in 1864 to the Reading Ironworks Company, Mr. W. Worby Beaumont in 1867 continued his engineering career under his grandfather, Mr. William Worby, at the Ipswich works of Messrs. Ransomes, Sims and Jeffries.

In 1872 he was interested in railway, dock, and foundry work. In addition to the practical side of engineering, Mr. Beaumont has done a very considerable amount of work on the literary side of the profession. For over ten years he was joint editor of the Engineer, in the pages of which many of his experiments, such as on steam condensation, steam, oil and gas engine performance, have been recorded.

In 1896 he resigned this position, to devote himself to his private consulting practice. Mr. Beaumont is a Founder Member of this Club; he has taken part in all the events of importance, acting repeatedly as one of the Judges. He has been from the beginning a member of the Executive and Club Committees, and up to the end of last year has been Chairman of the Editing Committee, which position he then resigned owing to want of time. He has written a book looked upon as a standard work on motor vehicles.

WILLIAM WORBY BEAUMONT was born in 1848 and commenced his engineering career as an apprentice at the Reading Ironworks, when the Lenoir gas-engine was being built.

He continued his works experience at Messrs. Ransomes and Sims, Ipswich, with his grandfather William Worby, who was works manager.

Subsequently he became assistant to Mr. Robert Mallett, F.R.S., and was engaged on civil engineering work of varied character.

He was also associated with The Engineer and with Vaughan Pendred as joint editor.

He commenced practice as a consulting engineer towards the end of last century, and was occupied largely upon works design and equipment, whilst wood-working machinery, paper-mill plant, piano design and construction, paint and varnish works, and chemical fabric and paper treating were among the many subjects which engaged his attention.

Of his inventions the "Vibromotor," based upon investigation of the causes of machinery vibration, is a good example of his ability in prescribing a useful remedy for a patent difficulty. Prominent among the small group of engineers who foresaw the present development of automobile transport, he devoted himself energetically to the encouragement of the mechanical road vehicle, and was associated with all the official vehicle trials, and with the efforts directed to removal of legal restrictions and the passing of the Motor Car Acts.

He was appointed technical adviser to the Commissioner of Police of the Metropolis, and he acted as adviser to many public authorities and companies. He frequently gave expert evidence in technical litigation, and acted as arbitrator in cases referred from the High Court. He was a founder member, vice-chairman, and honourary consulting engineer of the Royal Automobile Club, and vice-chairman of the Roads Improvement Association. The record of his varied interests is contained in the Proceedings of the engineering Institutions; and his many books and lectures.

His death occurred in London on the 14th April 1929, in his eighty-first year.

As an engineer his activities covered a wide field, as becomes one who for 10 years occupied the position of joint editor of the Engineer. His engineering education was of a very practical character.

Commencing at the Reading Iron Works, he proceeded as improver to Ransomes, Sims and Jefferies' works at Ipswich. After a time in the works of his father he became assistant to the late Mr. Robert Mallett, C.E., F.R.S.

He relinquished his editorial work for the Engineer about 25 years ago, resuming private practice. He was associated with the conduct of the Contract Journal, but it is in connection with automobiles that his labours will be best remembered. He was a pioneer in this direction.

He was honorary consulting engineer to the Royal Automobile Club, a member of the Treasury Committee on Horse-Power Rating, and an expert member of the Gas Traction Committee and of the Committee of the Surplus Government Property Disposal Board. For 12 years he was technical adviser to the Commissioner of Metropolitan Police on all motor vehicle questions.

He published a work on "The Origin of Rail Corrugation," upon which subject he took part in a discussion before the Institution. In conjunction with Mr. Biggs he read a paper on accumulators before one of the engineering societies. Other published works are "Industrial Electric Vehicles," "Modern Development of Paper Mill Plant" and a number relating to automobiles. As an illustration of his versatile accomplishments it may be mentioned that he designed an iron frame on a new principle for a Broadwood overstrung piano.

He was thrice married. Two sons and two daughters survive him. He was a "clubbable" man, and a fairly regular attendant at social gatherings connected with the engineering profession.

He was elected a Member of the Institution in 1897.

Grace's Guide web site design is Copyright © 2021 by Grace's Guide Ltd. The text of this web site is available under the Creative Commons Attribution-ShareAlike License; additional terms may apply. By using this site, you agree to the Terms of Use and Privacy Policy.