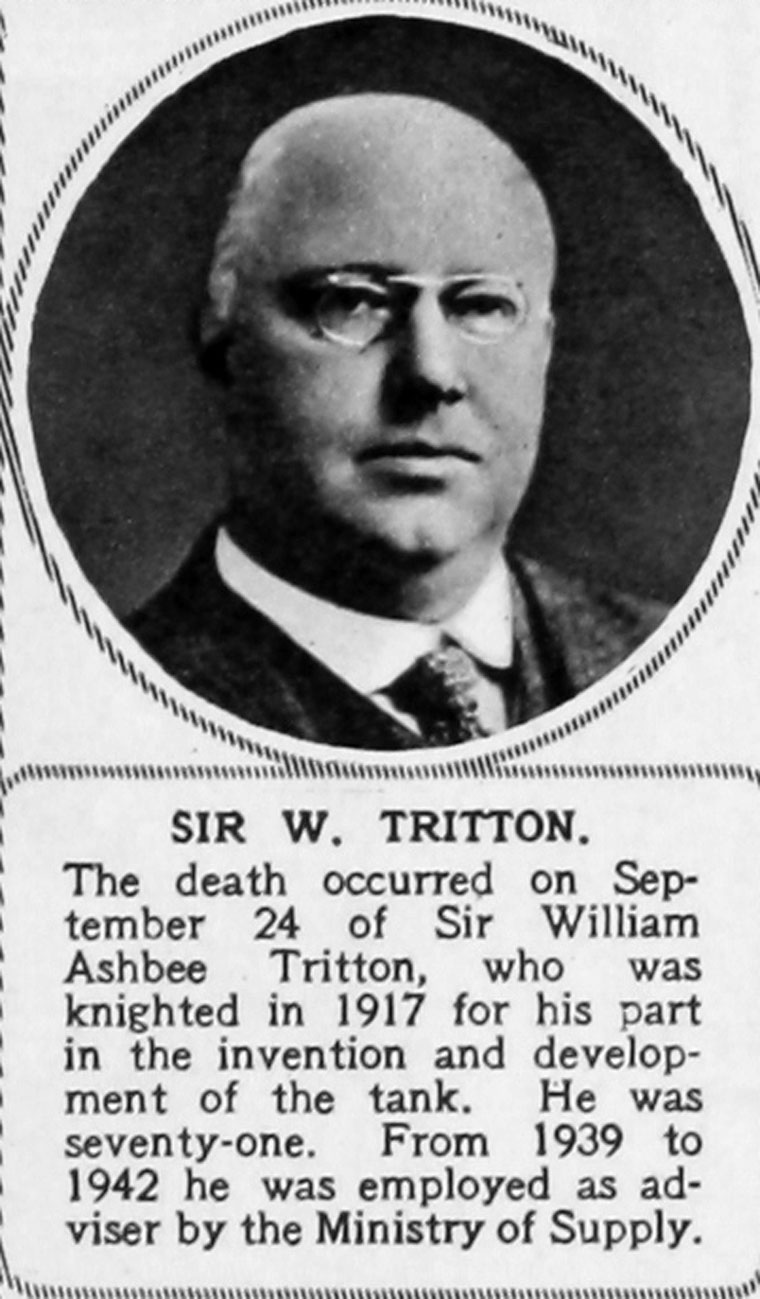 William Ashbee Tritton, M.I.Mech.E., J.P. (born 1875, London; died September 1946, Lincoln) was an expert in agricultural machinery and was directly involved, together with Major Walter Gordon Wilson, in the development of the tank.

1875 Born in Islington on 19 June, the son of William Birch Tritton, a stockbroker, and his wife, Ellen Hannah Ashbee.

1891 he was apprenticed with J. and H. Gwynne of Hammersmith. After completing his apprenticeship and serving with an assay company, he became an inspector of steel rails.

He later joined J. I. Thornycroft & Co at their Chiswick works and was responsible for the building of circulating pumps in torpedo boats.

He gained further experience as a shift engineer with the Metropolitan Electric Supply Co.

1899 he was employed in the toolroom of the Linotype Co. Whilst with Linotype he seems to have visited Germany.

1904 His experience in Germany enabled him to go out on behalf of Richard Garrett and Sons of Leiston, Suffolk, to clear up difficulties which had arisen in their German works.

WWI: Early in the First World War he was asked to discuss with Rear-Admiral Reginald Bacon, managing director of the Coventry Ordnance Works, the problem of transporting 15 inch howitzers. He produced designs for caterpillar-tracked tractors for moving naval guns and an order for tractors was placed. During the trials, which proved satisfactory, a large ditch was crossed by a tractor, and Winston Churchill (First Lord of the Admiralty) asked whether a machine could be constructed which would cross trenches. Tritton designed a tractor which could cross a trench 8 feet wide by laying its own portable bridge. The machine was not used, however, because of its weight. In the meantime the whole concept had caught Churchill's imagination and he appointed a "landships" committee to investigate the project more fully. Meanwhile, Ernest Swinton was urging similar proposals upon the War Office. The result was eventually the first modern tanks.

1915 Foster's first prototype was ready to move under its own power on 8 September but it required considerable modification before its traction and steering were satisfactory. Tritton continued to modify his design for the body, assisted by Lieutenant Walter Gordon Wilson, who was responsible for the engine. Their new version had the now familiar rhomboidal profile, with the tracks running round the periphery and the gun-turret was mounted between the tracks to improve the stability. After successful trials, orders were placed with Fosters and other firms. They first went into action in France, on 15 September 1916.

1917 He was knighted in 1917 for his part in the invention and development of the tank.

1917 Appointed director of construction of the mechanical warfare supply department (tanks) and he devised a modified tank, lighter, smaller, and faster, known as the Whippet, which was made its battlefield debut in March 1918 under the command of H. J. Elles.

1919 the Royal Commission on Awards to Inventors awarded Tritton and Wilson together £15,000[2]

1927 William Foster and Co contributed to the formation of a new company, by arrangement, to acquire the business and assets of Gwynnes Engineering Co[3] which was in liquidation. The new company was Gwynnes Pumps[4] and moved to Lincoln. Sir William Tritton became chairman of Gwynnes Pumps.