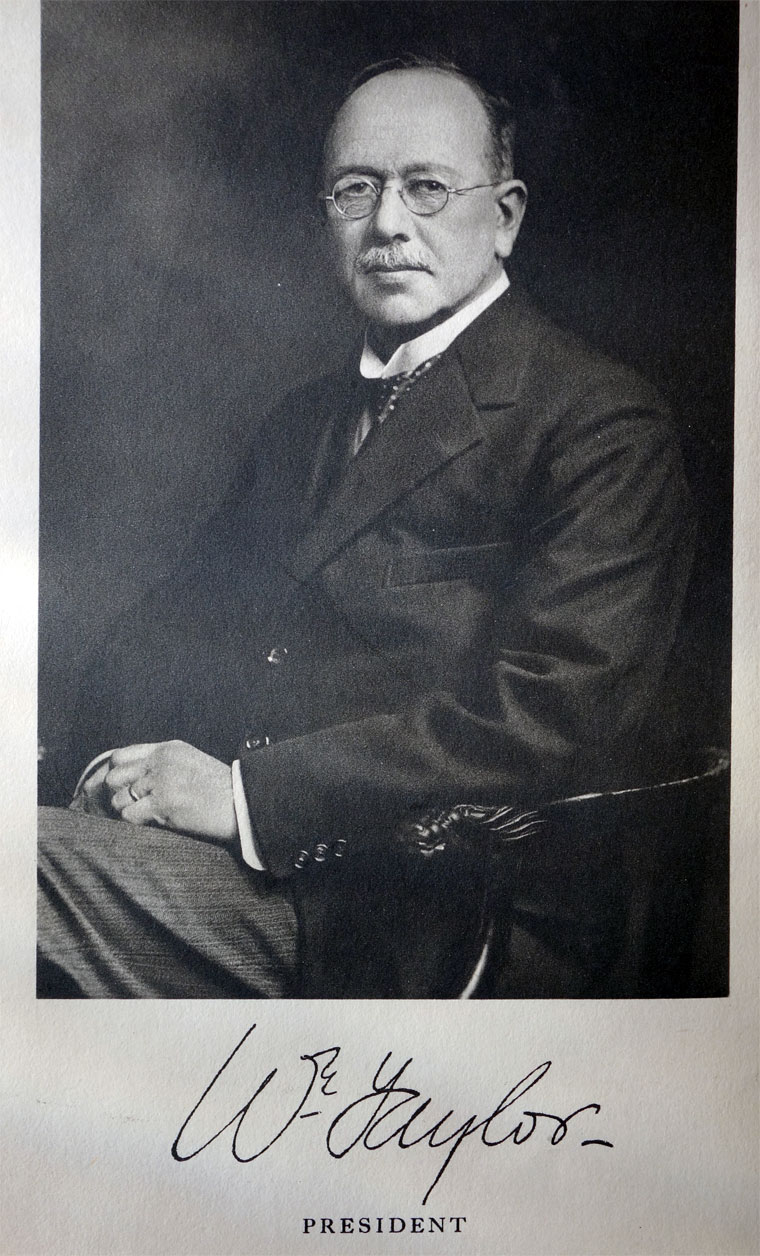 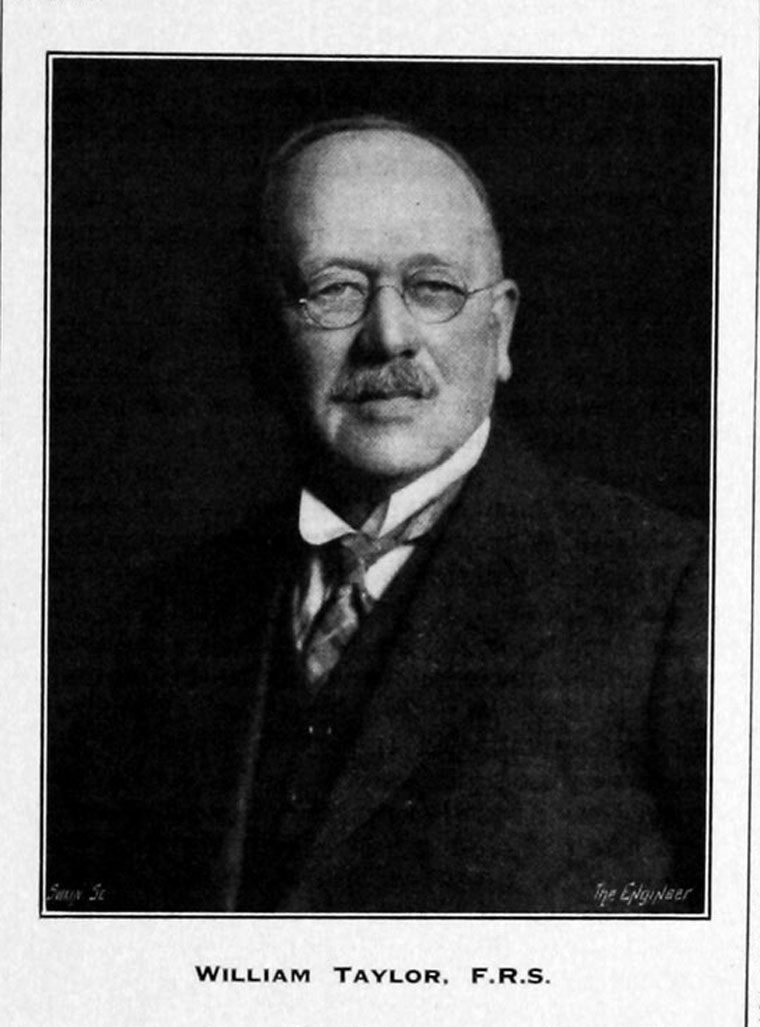 1865 June 11th. Born in Hackney the son of Richard Taylor and his wife Marianne Smithies

Co-founder in 1886 of Taylor, Taylor and Hobson. He will be remembered for raising the manufacture of lenses from an empirical craft to a scientific process. Apprenticeship: Paterson and Cooper, London.

1934 Fellow of the Royal Society

WILLIAM TAYLOR, O.B.E., will be remembered for his work in raising the manufacture of lenses from an empirical craft to a scientific process. He was actively engaged in developing the technique of the production of optical lenses for fifty years, during the whole of which he directed the firm of Taylor, Taylor and Hobson, of Leicester, which he and his brother, who was an optician, founded in 1886.

Mr. Taylor was born in Hackney in 1865 and served his apprenticeship from 1880 to 1885 in London with Messrs. Paterson and Cooper, electrical engineers and scientific instrument makers. He also studied electrical engineering at the City and Guilds of London Technical College at Finsbury, under Professors Armstrong, Ayrton, and Perry, who invented the ampere-meter and commissioned Mr. Taylor to make the first model of the instrument, which is now in the Science Museum, South Kensington. After further experience with Messrs. Paterson and Cooper, chiefly in the design and installation of electric lighting plants, he joined his brother in Leicester and later became governing director of the firm.

From the outset his aim was to apply mechanical engineering principles to the various processes in making lenses. He made a most comprehensive study of the methods to be employed in the grinding and polishing of glass, embodying the results in the numerous production machines which he designed. Some of his earliest inventions related to engraving machines and appliances for the mathematical division of lines and circles. His most notable work, however, was in connexion with the screw thread. It was characteristic of all his work that each problem should be analysed right down to its basic principles, and after a most persevering study of the subject he devised the means for producing master chasers, work chasers, semi-automatic chasing lathes, and other devices for the production of interchangeable screwed parts, together with the principle now universally employed in the gauging of the screw.

He was made a member of the Engineering Standards Committee on screw threads and limit gauges and of the British Association Small Screw Gauge Committee. A summary of his original work on screw threads forms an Appendix to his Presidential Address to the Institution in 1932. During the War Mr. Taylor designed machines for the accurate polishing of lenses and made it possible to produce large quantities of such lenses for binoculars. In, addition he devised new methods of lens manufacture for aerial photography, and produced lenses for range finders, gun sights, and telescopes.

He was awarded the O.B.E. for his services. More recently he was responsible for the manufacture of special photographic lenses for cinematograph cameras, and he was frequently consulted on photographic problems. Mr. Taylor always took a keen interest in education in engineering. In 1900 he wrote, "The science of design is the only science of engineering yet taught in technical schools or colleges, and it does not appear to be generally recognized that workshop processes and tools, being subject to natural laws, are capable of scientific investigation and treatment". He desired that both foremen and artisans should receive education in the scientific principles pertaining to their work. For some years past Mr. Taylor had served on the Council of the National Physical Laboratory and on the Sectional Committees on Optical Instruments and Optical Instrument Standards of the Department of Scientific and Industrial Research.

In 1934 he was made a Fellow of the Royal Society. He was elected an Associate Member of the Institution in 1894 and was transferred to Membership in 1901. In 1918 he was elected a Member of Council, and became Vice-President in 1927 and President in 1932, in which year he led the Institution at the notable Summer Meeting in Canada and delivered his remarkable Presidential Address on "Mechanical Engineering Applied to the Making of Lenses". His other contributions included two lectures to the London Graduates' section, on "Science of the Engineering Workshop" and "Science in Works Management", delivered in 1928 and 1930 respectively. In 1936 he was elected an Honorary Life Member.

For several years he rendered valuable services on the Research Advisory Committee, of which he was chairman for some time. He took a keen interest in the Inventions Advisory Committee, of which he was chairman from its inception; when these two committees were merged, in 1935, he continued to serve as a member of the Research and Inventions Advisory Committee. He originated the policy of the formation of Specialized Groups in the Institution, three of which were formed in his lifetime. Mr. Taylor's sudden death, whilst helping to rescue his son's car from a snowdrift, occurred on 28th February 1937.

[long and detailed obituary plus image]