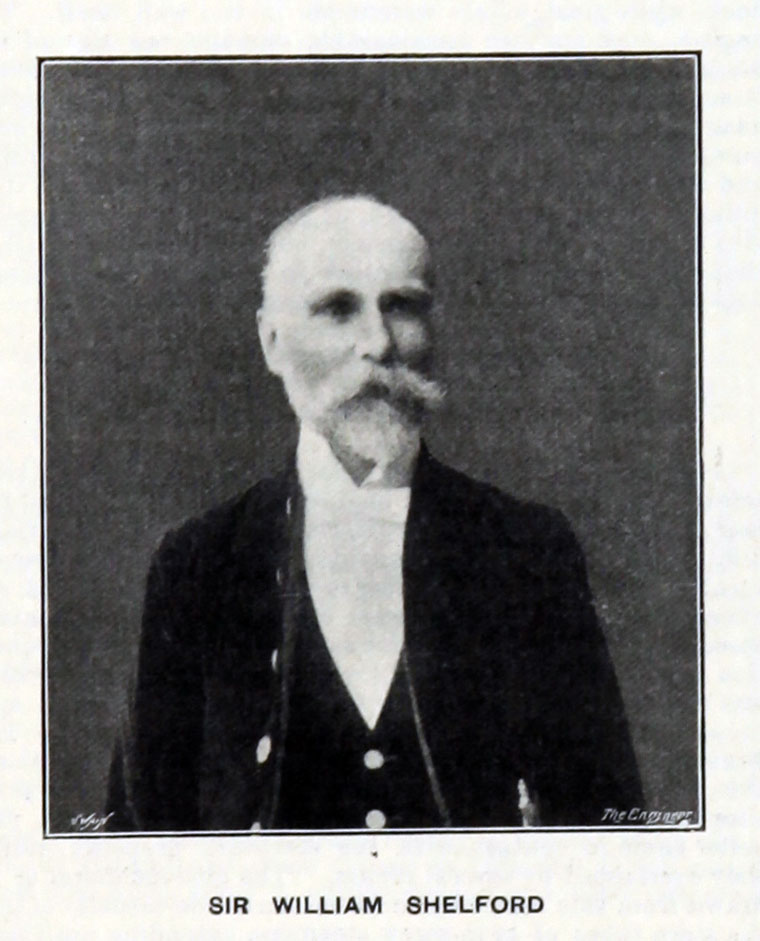 Sir WILLIAM SHELFORD, K.C.M.G., died at his residence, 49 Argyll Road, Kensington, on the 3rd October, 1905, in his seventy-second year.

Born on the 11th April, 1834, he was the eldest son of the Rev. W. Heard Shelford, Fellow of Emmanuel College, Cambridge, and afterwards Rector of Preston St. Mary, Suffolk, who died in 1854. Left thus at a comparatively early age to make his own way in the world, the subject of this notice decided to seek his fortune as a civil engineer. With this object in view he served a pupilage to Mr. William Gale, of Glasgow, at the same time studying at Glasgow University.

In 1856 he came to London, and entered the office of Mr. (afterwards Sir John) Fowler, Past-President, by whom he was given employment on the Nene Navigation Works, and the construction of the Metropolitwn Underground Railway.

Transferring his services in 1860 to Mr. T. F. Turner, joint engineer with Mr. Joseph Cubitt of the London Chatham and Dover Railway, then in course of construction, Mr. Shelford acted as Resident Engineer on the high-level line to the Crystal Palace, and subsequently, in the same capacity, on the Greenwich extension as far as Blackheath Hill.

In 1865 Mr. Shelford engaged in practice on his own account at Westminster, where in the course of time he built up an extensive and important connection and attained a prominent place in the ranks of the profession.

Among numerous other undertakings, he was responsible for the Louth and East Coast Railway; the Burry Port and Gwendreath Valley line; Downham and Stoke Ferry and Brechin and Edzell railways; Louth, Truro, and Chichester waterworks; and sewerage works at Crossness, Tottenham and Southampton; as well as for mining installations and equipment at home and abroad. As engineer of the Hull and Barnsley Railway,(the Act for which was obtained in 1880, he was called upon to defend the scheme against strenuous opposition in Parliament; and the subsequent construction of this line, entailing some heavy and difficult works, bears witness to his skill and resource. From his frequent attendance as a witness in engineering schemes before the legislature he became well known in parliamentary committee-rooms, and gave evidence in connection with many of the largest undertakings in the country.

The works and projects with which he was associated during the course of his active professional life, on account of their great number and diversity, cannot be enumerated in detail. At home, they include parliamentary work in connection with the Hull, Barnsley and West Riding, the Hull and North Western, and other railways, and the Manchester Ship-Canal ; services rendered in a consultative capacity to the Corporation of Edinburgh and other bodies; and some important arbitrations. Abroad, he was connected with railways, harbours, mines, and other engineering works in Argentina, Canada, Italy, Sicily, Spain, India and Ceylon, and indeed all quarters of the globe; but his name will probably be best remembered as Consulting Engineer to the Crown Agents for the Colonies, in which capacity he directed exploration surveys, and designed and built hundreds of miles of railways in Sierra Leone, Lagos, Gold Coast, and Nigeria, works carried out in the face of great difficulties in a notoriously bad climate.

In 1899 he took his son, Mr. Frederic Shelford, into partnership, and some years later, his health beginning to fail, he was obliged to restrict his activities, leaving the conduct of his extensive practice more and more in the hands of his son, who afterwards entered into partnership with Sir Benjamin Baker, Past-President, his father’s old comrade.

Made a C.M.G. in 1901, Sir William received the well-deserved honour of K.C.M.G. in June, 1904, on the recommendation of the Secretary of State for the Colonies. He then decided to retire definitely from the pursuit of his profession, and thereafter, until his death, lived quietly at his home in Kensington.

Sir William was elected a Member of Council in 1887, and served continuously on that body until 1897, when he retired; but, at the request of his colleagues, he allowed himself to be re-elected in 1901, and remained a Member of Council until his death. He always took an active part in the proceedings of the Institution, to which he presented several communications, including Papers "On the Outfall of the River Humber," "The Treatment of Sewage by Precipitation," and "On Rivers flowing into Tideless Seas, illustrated by the River Tiber." For these Papers he was awarded a Telford medal and premium and a Watt medal. He also served on the Engineering Standards Committee, and as an officer of the Engineering Conference in 1897 and again in 1903. He was a member of the Royal Geographical Society, the Royal Colonial Institute, the Society of Arts and other scientific and learned societies. In professional circles, his name stood for indefatigable energy, ability, and high character.

He was elected a Member oft his Institution on the 10th April, 1866.