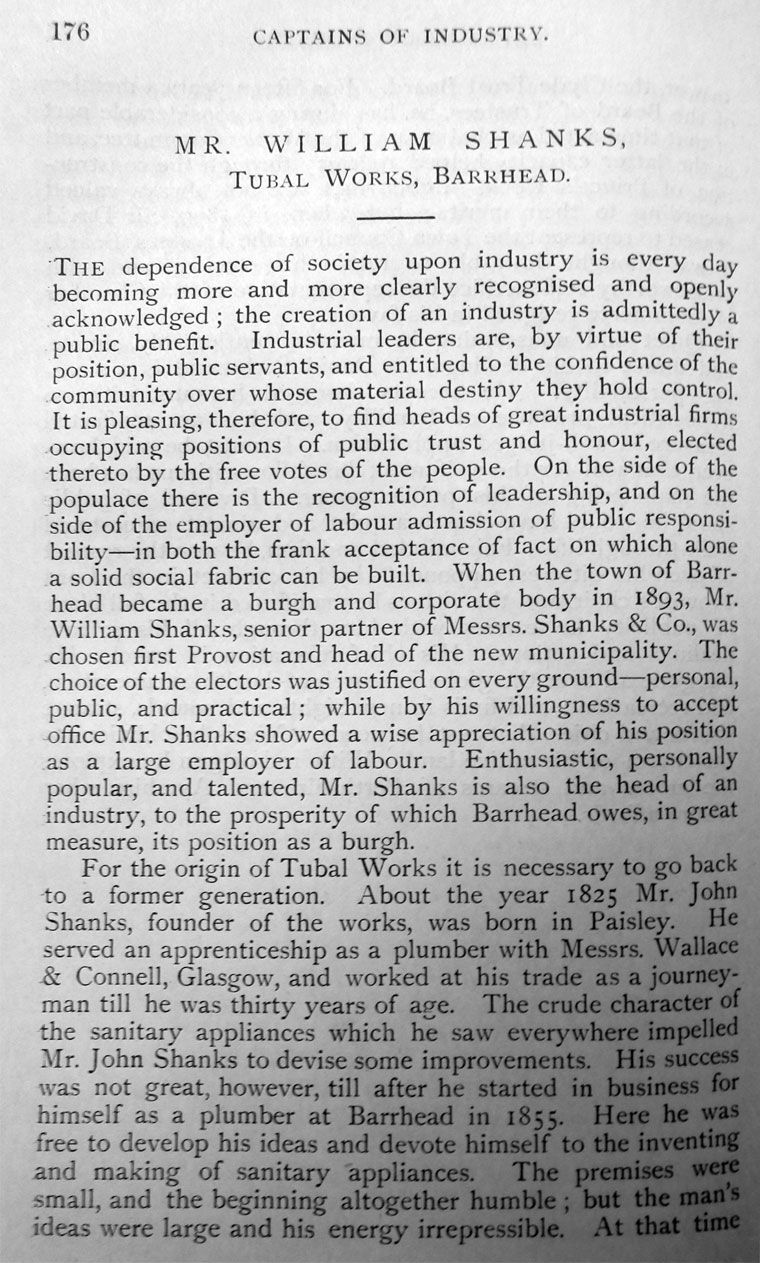 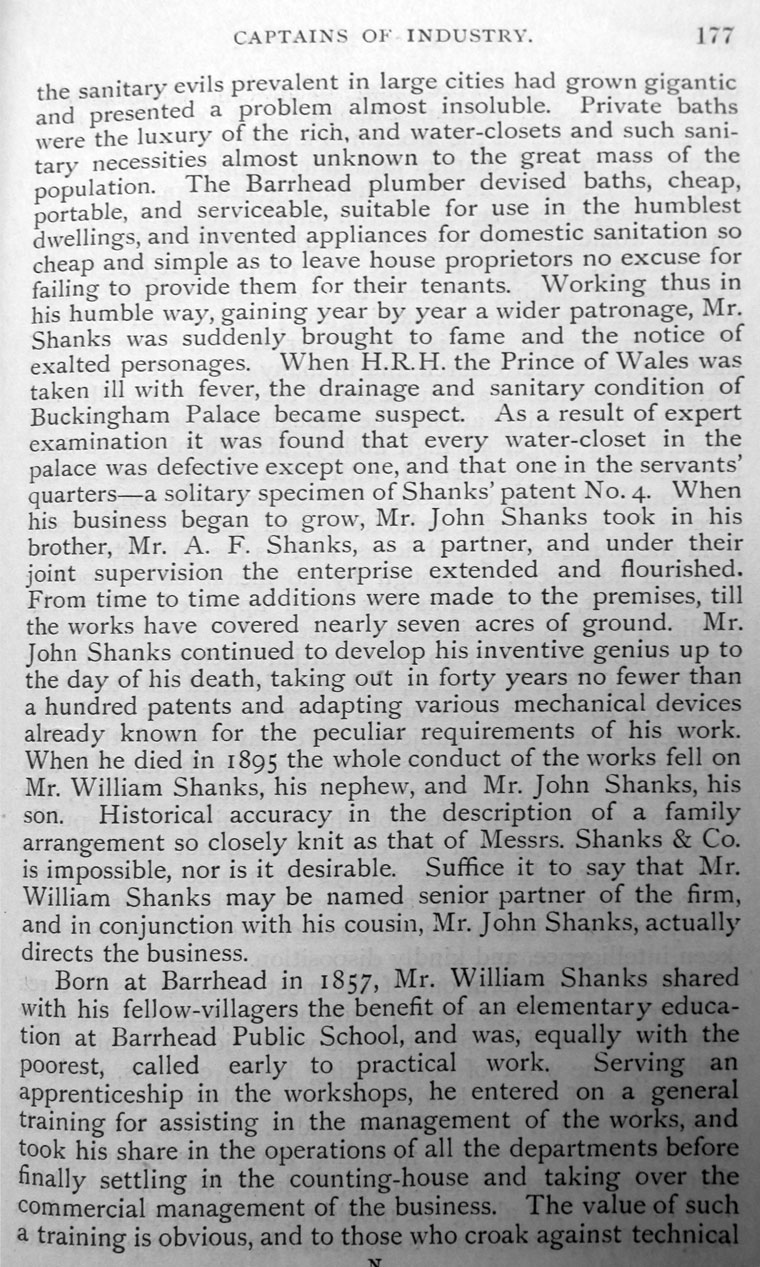 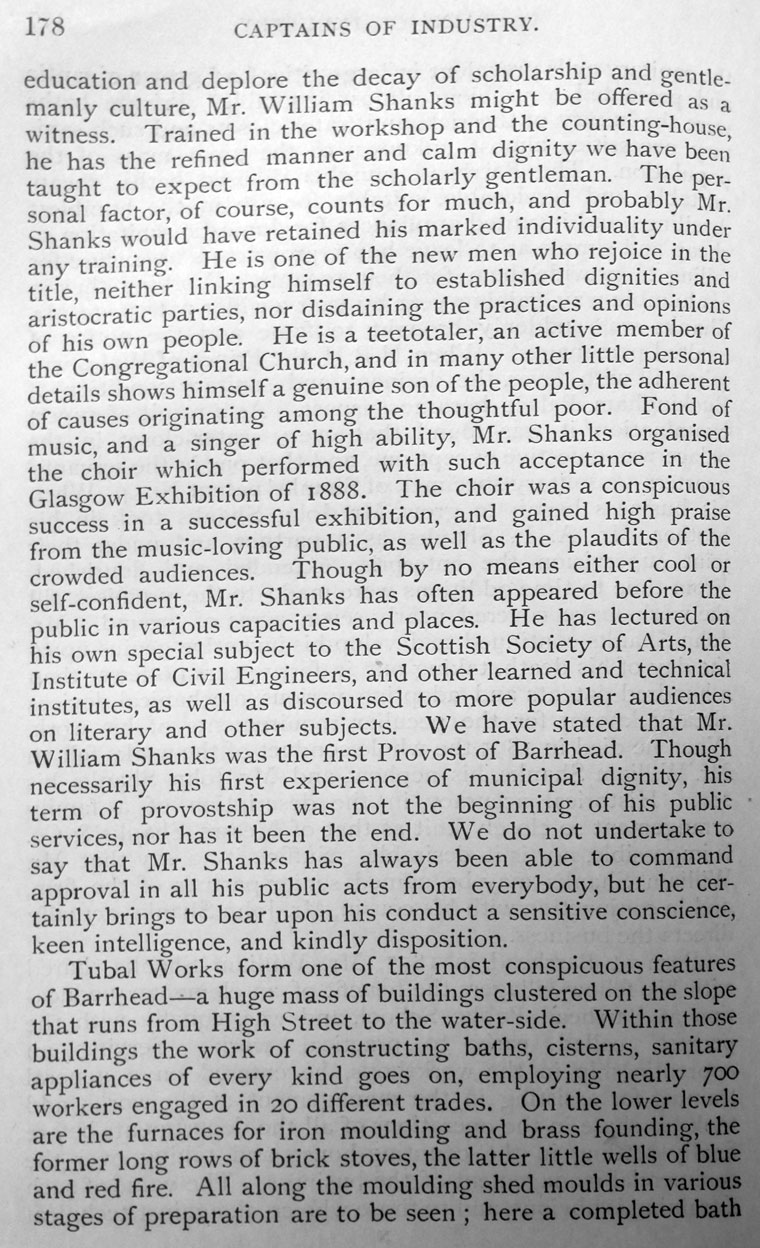 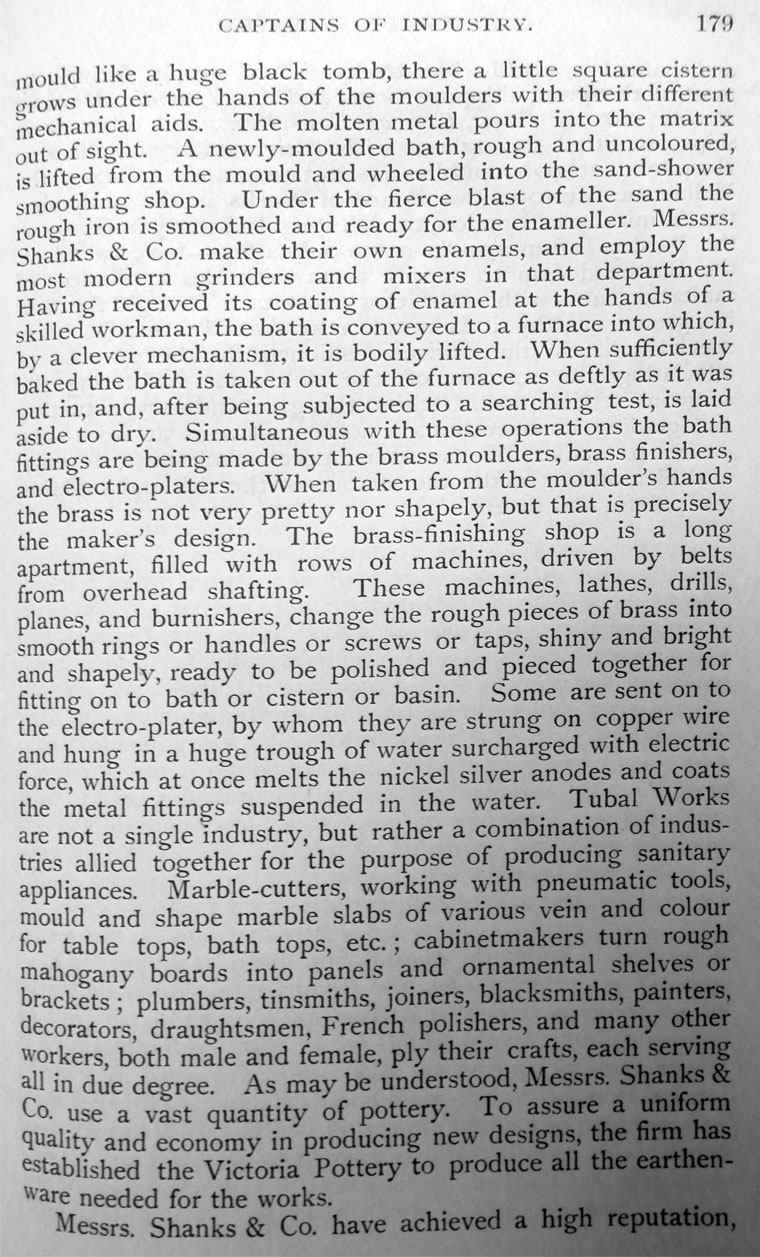 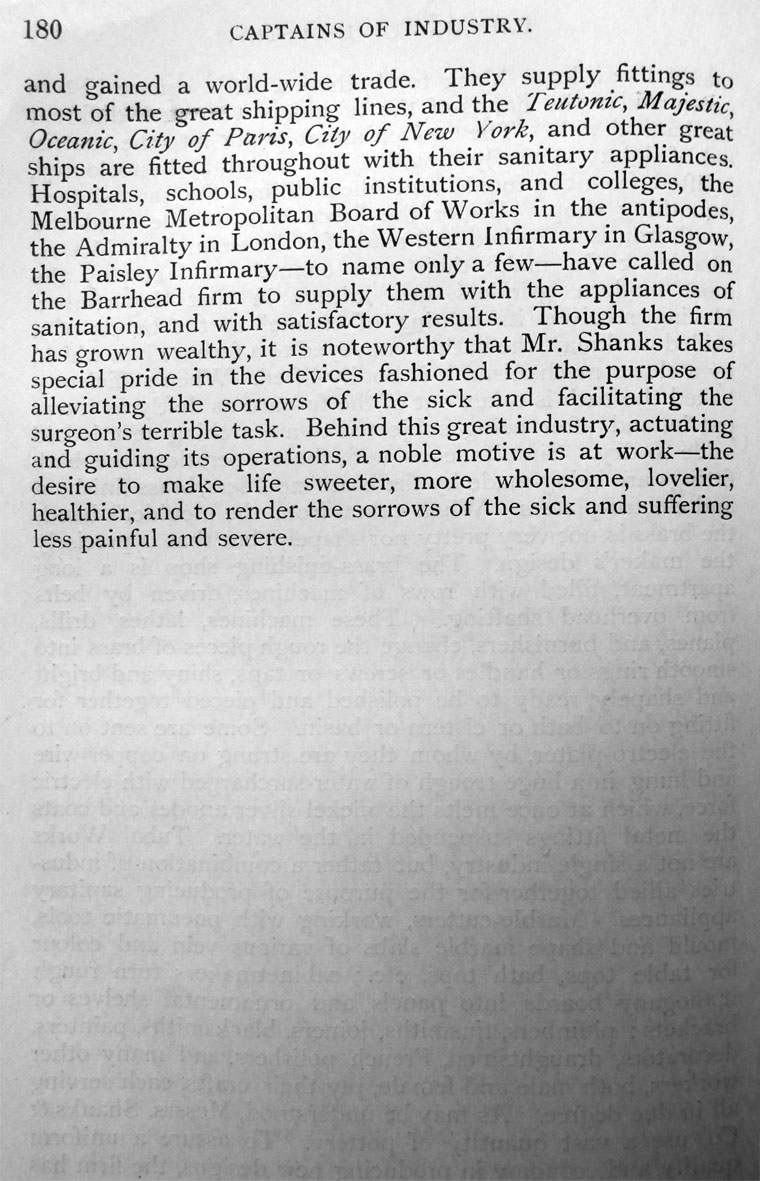 THE dependence of society upon industry is every day becoming more and more clearly recognised and openly acknowledged; the creation of an industry is admittedly a public benefit. Industrial leaders are, by virtue of their position, public servants, and entitled to the confidence of the community over whose material destiny they hold control. It is pleasing, therefore, to find heads of great industrial firms occupying positions of public trust and honour, elected thereto by the free votes of the people. On the side of the populace there is the recognition of leadership, and on the side of the employer of labour admission of public responsibility — in both the frank acceptance of fact on which alone a solid social fabric can be built. When the town of Barrhead became a burgh and corporate body in 1893, Mr. William Shanks, senior partner of Messrs. Shanks & Co., was chosen first Provost and head of the new municipality. The choice of the electors was justified on every ground—personal, public, and practical; while by his willingness to accept office Mr. Shanks showed a wise appreciation of his position as a large employer of labour. Enthusiastic, personally popular, and talented, Mr. Shanks is also the head of an industry?, to the prosperity of which Barrhead owes, in great measure, its position as a burgh.

For the origin of Tubal Works it is necessary to go back to a former generation. About the year 1825 Mr. John Shanks, founder of the works, was born in Paisley. He served an apprenticeship as a plumber with Messrs. Wallace Connell, Glasgow, and worked at his trade as a journeyman till he was thirty years of age. The crude character of the sanitary appliances which he saw everywhere impelled Mr. John Shanks to devise some improvements. His success was not great, however, till after he started in business for himself as a plumber at Barrhead in 1855. Here he was free to develop his ideas and devote himself to the inventing and making of sanitary appliances. The premises were small, and the beginning altogether humble; but the man's ideas were large and his energy irrepressible. At that time the sanitary evils prevalent in large cities had grown gigantic and presented a problem almost insoluble. Private baths were the luxury of the rich, and water-closets and such sanitary necessities almost unknown to the great mass of the population. The Barrhead plumber devised baths, cheap, portable, and serviceable, suitable for use in the humblest dwellings, and invented appliances for domestic sanitation so cheap and simple as to leave house proprietors no excuse for failing to provide them for their tenants.

Working thus in his humble tray, gaining year by year a wider patronage, Mr. Shanks was suddenly brought to fame and the notice of exalted personages. When H.R.H. the Prince of Wales was taken ill with fever, the drainage and sanitary condition of Buckingham Palace became suspect. As a result of expert examination it was found that every water-closet in the palace was defective except one, and that one in the servants' quarters - a solitary specimen of Shanks' patent No. 4.

When his business began to grow, Mr. John Shanks took in his brother, Mr. A. F. Shanks, as a partner, and under their joint supervision the enterprise extended and flourished. From time to time additions were made to the premises, till the works have covered nearly seven acres of ground. Mr. John Shanks continued to develop his inventive genius up to the day of his death, taking out in forty years no fewer than a hundred patents and adapting various mechanical devices already known for the peculiar requirements of his work.

When he died in 1895 the whole conduct of the works fell on Mr. William Shanks, his nephew, and Mr. John Shanks, his son. Historical accuracy in the description of a family arrangement so closely knit as that of Messrs. Shanks and Co. is impossible, nor is it desirable. Suffice it to say that Mr. William Shanks may be named senior partner of the firm, and in conjunction with his cousin, Mr. John Shanks, actually directs the business.

Born at Barrhead in 1857, Mr. William Shanks shared with his fellow-villagers the benefit of an elementary education at Barrhead Public School, and was, equally with the poorest, called early to practical work. Serving an apprenticeship in the workshops, he entered on a general training for assisting in the management of the works, and took his share in the operations of all the departments before finally settling in the counting-house and taking over the commercial management of the business. The value of such a training is obvious, and to those who croak against technical education and deplore the decay of scholarship and gentlemanly culture, Mr. William Shanks might be offered as a witness. Trained in the workshop and the counting-house he has the refined manner and calm dignity we have beer; taught to expect from the scholarly gentleman. The personal factor, of course, counts for much, and probably Mr. Shanks would have retained his marked individuality under any training. He is one of the new men who rejoice in the title, neither linking himself to established dignities and aristocratic parties, nor disdaining the practices and opinions of his own people. He is a teetotaler, an active member of the Congregational Church, and in many other little personal details shows himself a genuine son of the people, the adherent of causes originating among the thoughtful poor. Fond of music, and a singer of high ability, Mr. Shanks organised the choir which performed with such acceptance in the Glasgow Exhibition of 1888. The choir was a conspicuous success in a successful exhibition, and gained high praise from the music-loving public, as well as the plaudits of the crowded audiences. Though by no means either cool or self-confident.

Mr. Shanks has often appeared before the public in various capacities and places. He has lectured on his own special subject to the Scottish Society of Arts, the Institute of Civil Engineers, and other learned and technical institutes, as well as discoursed to more popular audiences on literary and other subjects. We have stated that Mr. William Shanks was the first Provost of Barrhead. Though necessarily his first experience of municipal dignity, his term of provostship was not the beginning of his public services, nor has it been the end. We do not undertake to say that Mr. Shanks has always been able to command approval in all his public acts from everybody, but he certainly brings to bear upon his conduct a sensitive conscience, keen intelligence, and kindly disposition.

Tubal Works form one of the most conspicuous features of Barrhead — a huge mass of buildings clustered on the slope that runs from High Street to the water-side. Within those buildings the work of constructing baths, cisterns, sanitary appliances of every kind goes on, employing nearly 700 workers engaged in 20 different trades. On the lower levels are the furnaces for iron moulding and brass founding, the former long rows of brick stoves, the latter little wells of blue and red fire. All along the moulding shed moulds in various stages of preparation are to be seen; here a completed bath mould like a huge black tomb, there a little square cistern grows under the hands of the moulders with their different mechanical aids. The molten metal pours into the matrix out of sight. A newly-moulded bath, rough and uncoloured, is lifted from the mould and wheeled into the sand-shower smoothing shop. Under the fierce blast of the sand the rough iron is smoothed and ready for the enameller. Messrs. Shanks Co. make their own enamels, and employ the most modern grinders and mixers in that department. Having received its coating of enamel at the hands of a skilled workman, the bath is conveyed to a furnace into which, by a clever mechanism, it is bodily lifted. When sufficiently baked the bath is taken out of the furnace as deftly as it was put in, and, after being subjected to a searching test, is laid aside to dry.

Simultaneous with these operations the bath fittings are being made by the brass moulders, brass finishers, and electro-platers. When taken from the moulder's hands the brass is not very pretty nor shapely, but that is precisely the maker's design. The brass-finishing shop is a long apartment, filled with rows of machines, driven by belts from overhead shafting. These machines, lathes, drills, planes, and burnishers, change the rough pieces of brass into smooth rings or handles or screws or taps, shiny and bright and shapely, ready to be polished and pieced together for fitting on to bath or cistern or basin. Some are sent on to the electro-plater, by whom they are strung on copper wire and hung in a huge trough of water surcharged with electric force, which at once melts the nickel silver anodes and coats the metal fittings suspended in the water. Tubal Works are not a single industry, but rather a combination of industries allied together for the purpose of producing sanitary appliances. Marble-cutters, working with pneumatic tools, mould and shape marble slabs of various vein and colour for table tops, bath tops, etc.; cabinetmakers turn rough mahogany boards into panels and ornamental shelves or brackets; plumbers, tinsmiths, joiners, blacksmiths, painters, decorators, draughtsmen, French polishers, and many other workers, both male and female, ply their crafts, each serving all in due degree. As may be understood, Messrs. Shanks & Co. use a vast quantity of pottery. To assure a uniform quality and economy in producing new designs, the firm has established the Victoria Pottery to produce all the earthenware needed for the works.

Messrs. Shanks & Co. have achieved a high reputation, and gained a world-wide trade. They supply fittings to most of the great shipping lines, and the Teutonic, Majestic, Oceanic, City of Paris, City of New York, and other great ships are fitted throughout with their sanitary appliances. Hospitals, schools, public institutions, and colleges, the Melbourne Metropolitan Board of Works in the antipodes, the Admiralty in London, the Western Infirmary in Glasgow, the Paisley Infirmary — to name only a few — have called on the Barrhead firm to supply them with the appliances of sanitation, and with satisfactory results. Though the firm has grown wealthy, it is noteworthy that Mr. Shanks takes special pride in the devices fashioned for the purpose of alleviating the sorrows of the sick and facilitating the surgeon's terrible task. Behind this great industry, actuating and guiding its operations, a noble motive is at work — the desire to make life sweeter, more wholesome, lovelier, healthier, and to render the sorrows of the sick and suffering less painful and severe.