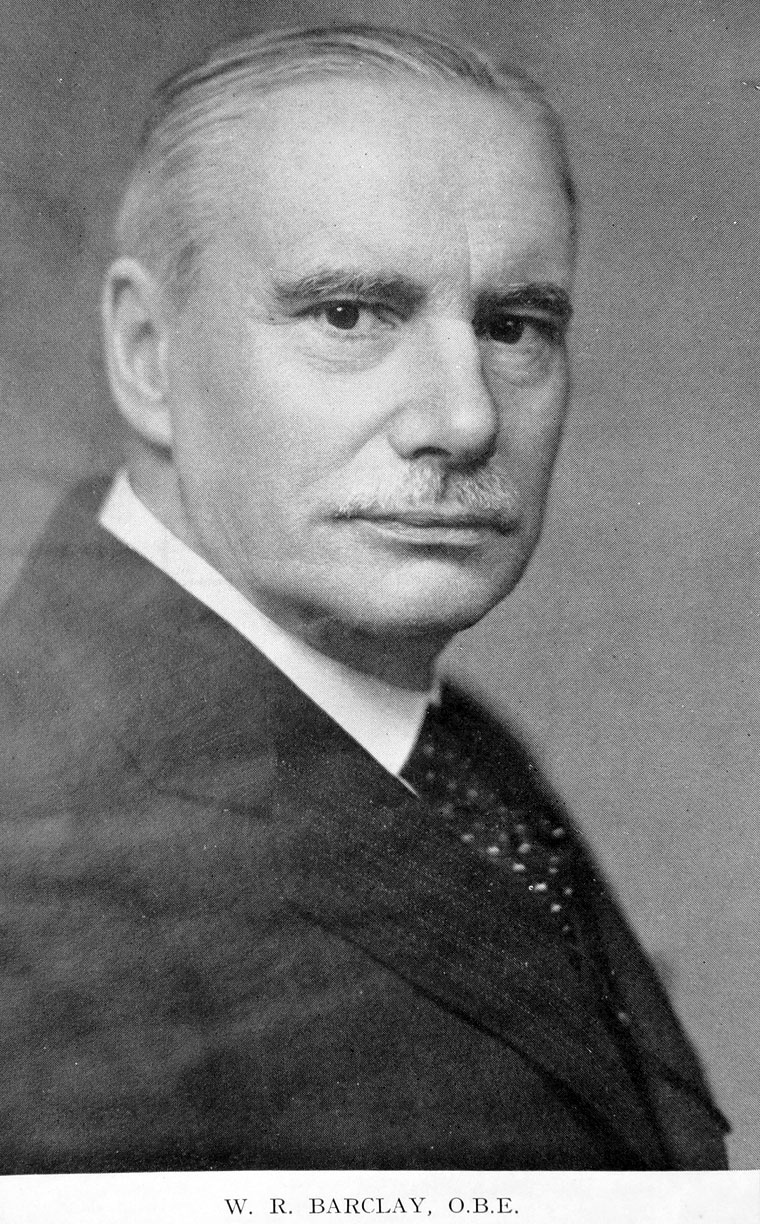 WILLIAM ROBB BARCLAY, O.B.E. (Past-President). The loss of its immediate Past-President, who had rendered to it inestimable services, was keenly felt by all members of the Institute of Metals, and most keenly by those who knew him best. At home and abroad, wherever his metallurgical interests took him, he made friends, and his death at a comparatively early age came as a blow. Throughout the illness to which he succumbed, he never lost courage, and dictated from his sick-bed many letters to his colleagues on the Council, always looking forward to the time when he would be able again to take part in their proceedings.

The Institute meant much to him, and throughout his Presidency he kept in touch with its outlying members by frequent visits to Local Sections and to foreign centres where metallurgists of other nationalities wore to be found, and in this way served as a most efficient link with our overseas members. The work of building up an Endowment Fund, which lay very near his heart, was undertaken by him with enthusiasm, and it was to his charm of manner and to his evident sincerity that the Institute owes perhaps the greater number of the subscriptions which were received. In this and many other ways he served the Institute unselfishly.

William Robb Barclay was born in 1875, the son of James Laing Barclay, both his parents belonging to Aberdeen families. He was educated privately and at the Sheffield Technical School and the University College, which were afterwards united to form the University of Sheffield.

His interests from an early age were metallurgical, and he secured a number of distinctions in electroplating and allied subjects. When he was 18 years old, he entered the firm of Mappin Brothers, while carrying on work with Professor McWilliam on the alloys then known as German silver.

He became works manager in the Silver and Electro Department of Joseph Rodgers and Sons, and at the same time acted as Lecturer in Electrodeposition in the Applied Science Department of the University.

In 1912, he published, with his colleague C. H. Hainsworth, a text-book on "Electroplating" (Arnold), which has long served students of the subject, both academic and industrial. He published one other book, with L. Aitchison, on "Non-Ferrous Metals in Engineering." (Oxford University Press, 1931).

The war brought him new duties and opportunities of service. His experience of nickel alloys led to his being asked to assist the makers of cartridges in the production of cupro-nickel for bullet envelopes. The alloy is a difficult one to produce in a sound condition, and the laboratory of the University Metallurgical Department was used for experiments and for the instruction of workmen in its production. Mr. G. B. Brook was associated with him in this work. The results were highly successful, and in a short time the production reached very large figures. In consequence, Barclay became chief metallurgist to the Non-Ferrous Rolled Metal Section of the Ministry of Munitions. I think that it was in this capacity that I first met him, when we visited works in the Birmingham area to compare methods of making ingots. He took an important step in utilizing electric furnaces for the melting of cupro-nickel and other nickel alloys.

Early in 1918 he was sent to France to advise on the process of repairing worn steel parts by building up electrolytically with iron or nickel. This process proved most valuable, and, when a special committee of the fighting services was set up to investigate its possibilities, he was appointed as its technical director. By this means many thousands of parts which would otherwise have been scrapped on account of wear were built up and then machined exactly to the original size. His war services were recognized by the award of the O.B.E.

In 1919 he entered the firm of Henry Wiggin and Company in Birmingham, devoting himself thenceforth mainly to nickel and its applications. He became Managing Director of the concern in 1928, and in 1931 consulting metallurgist to The Mond Nickel Company, Ltd., a post which he retained until his death. In this capacity he travelled widely on the Continent and in America, being always a welcome visitor to metallurgical works of what- ever country.

He was also associated from the beginning with the Copper Development Association, which arose as the result of an inquiry conducted by himself and Mr. C. H. Schneider. In his Presidential Address to the Institute he discussed, in a most interesting way, the activities and functions of such associations, dealing in turn with nickel, aluminium, tin, and copper. In this connection he laid stress on the international co-operation which is involved in the working of such bodies. Efforts of this kind consorted well with his liberal and democratic views. His other contributions to our Journal included valuable accounts of technical practice; papers of a kind which are all too rarely submitted to the Institute.

The Institute of Metals formed one of Barclay's principal interests. He was an original member, and when a Local Section was established in Sheffield it was natural that he should be its first Chairman. From 1925 onwards he served continuously on the Council, and when in 1936 he was elected to the presidential chair it was recognized that no fitter choice could have been made. He threw himself into the work with the greatest enthusiasm, and shirked no pains to make its influence felt. Mention has been made of his establishment of the Endowment Fund, which he hoped to bring to a total of £20,000, and this figure would certainly have been attained had he been able to complete the task. As it is, he carried it so far that his successors should not find it difficult to reach the figure he set.

In June of this year he was to have delivered the Calvin W. Rice Lecture to the American Society of Mechanical Engineers and to have received the honorary degree of Doctor of Science from the Stevens Institute of Technology. He was prevented by illness from going, but he had completed the text of the lecture, which was read for him, and he was able to see and appreciate messages telling him how warm had been its reception in St. Louis.

In 1931 he was awarded the Thomas Turner Medal of the University of Birmingham for his services to industrial metallurgy.

Barclay married Margaret Helena, daughter of E. Hartley, of Parkgate, Yorkshire, and had two sons and two daughters, one of whom, together with her mother, nursed him devotedly throughout his sickness. Mrs. Barclay was a familiar and welcome figure at Institute functions. Although not robust in appearance, Barclay was sturdy, and usually enjoyed excellent health. It was therefore a shock to his colleagues when they learned that an illness which showed itself in May last was likely to prove a long one, although his complete recovery was expected. As time went on, the news became more grave, and he passed away at his home in Birmingham on September 16, 1938. The large gathering of metallurgists and others at the funeral service in the Old Meeting Church was evidence of the respect and affection in which he was held. —C. H. D.