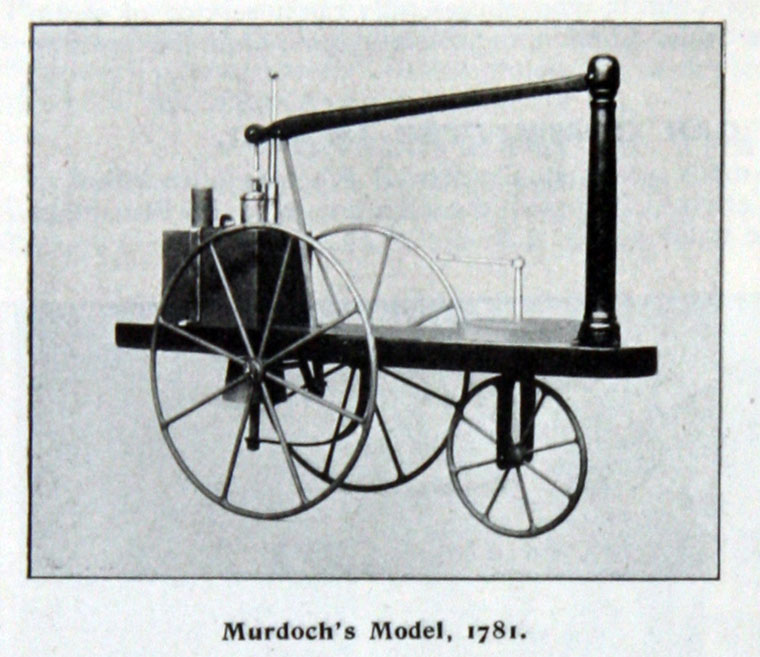 An important invention for which William Murdoch's name is little known is Britain's first working model of a steam engine carriage, or locomotive in 1781.

French engineer Nicolas-Joseph Cugnot had had already demonstrated from 1769 by building two full sized working steam vehicles, one of which could carry 4 tons, the utility of such a device. All that was needed was a more effective design.

The earliest mention of Murdoch's thoughts and plans for this method of transport was in March 1784 when his colleague in Cornwall, Thomas Wilson, wrote to James Watt on Murdoch's "new scheme": It is no less than drawing carriages upon the road with steam engines...he says that what he proposes, is different from anything you ever thought of, and that he is positively certain of its answering and that there is a great deal of money to be made by it.

Replies from Watt made it clear that he thought there was no future in such an idea and, fearful of losing Murdoch's services in Cornwall, attempted to dissuade him from the scheme.

A later letter from Matthew Boulton disclosed more details of Murdoch's ideas: He proposes to catch most of the condensed Steam by making it strike against broad Copper plates & the condensed part trickling down may be caught and returned into its Boiler or other reservoir. This may do some good in rain or frosty weather & he proposes to have different sized revolvers to apply at every hill & every vale according to their angle with ye Horizon... I verely believe he would sooner give up all his Cornish business & interest than be deprived of carrying the thing into execution.

In the same letter Boulton also secretly urged Watt to include a scheme for a steam powered carriage in his patent application, which Watt did shortly thereafter. I have given such descriptions of engines for wheel carriages as I could do in the time and space I could allow myself; but it is very defective and can only serve to keep other people from similar patents.

By this time Murdoch had already built a working model of his steam carriage and now at Thinktank, Birmingham's new science museum; and accounts exist from witnesses who "saw the model steam carriage run around Murdoch's living room in Redruth in 1784. This is the first recorded example in Great Britain of a man-made machine moving around completely under its own power.

Murdoch's working model was a three wheeled vehicle about a foot in height with the engine and boiler placed between the two larger back wheels with a spirit lamp underneath to heat the water and a tiller at the front turning the smaller front wheel. The mechanics of the model locomotive incorporated a number of innovations, such as a boiler safety valve, having the cylinder partly immersed in the boiler and using a new valve system on the lines of the D-slide valve.

This model was not the only one made by Murdoch as he continued experimenting with the design and by August 1786 had made at least one other model, of a different size, which we know of.

Apart from this Murdoch doesn't appear to have worked much on his ideas from 1784 to 1786 due to the continuing high volume of work for Boulton and Watt; his marriage in 1785 and the birth of their twins in the same year. Shortly after this birth, and with a second model already built, Murdoch took steps to patent his steam locomotive.

However, at Exeter on the way to London he was met by Matthew Boulton who persuaded him to return to Cornwall without registering the patent. As Boulton wrote to Watt on the 2nd September 1795: He said He was going to London to get Men but I soon found he was going there with his Steam Carg to shew it & to take out a patent. He having been told by Mr W. Wilkn what Sadler had said & he had likewise read in the news paper Simmingtons puff which had rekindled all Wms fire & impations to make Steam Carriages. However, I prevailed upon him readily to return to Cornwall by the next days diligence & he accordingly arivd here this day at noon, since which he hath unpacked his Carg & made Travil a Mile or two in Rivers;s great room in a Circle makeing it carry the fire Shovel, poker & tongs.

This demonstration of his steam carriage in Rivers Great Room, at the King's Head, Truro, was the first public demonstration in Britain given of Steam locomotion in action.

Although after 1786 there is no further mention of Murdoch's work on Steam Carriages in Watt or Boultons correspondence a volume of evidence exists that he continued to work on it without his employers support and some argue that a full size version was built.

One story often told, both in respect of a full size carriage and one of his models, is that one night Murdoch decided to test his carriage outside on the open road and it soon outpaced him, leaving him to chase after it. Whilst chasing it he encountered a local clergyman in a state of considerable distress who had mistaken his carriage, with its billowing smoke and fire burning under the boiler, for the devil. This story may be accurate, however is more likely to relate to a model than to a full size steam carriage.

Another story often told, this one almost certainly apocryphal, is of Murdoch travelling from "mine to mine in a steam chaise lit by gas", given the state of the roads at that time this can be discounted. However, it is argued by John Griffiths that Murdoch may have built a full size steam carriage some time in the 1790s, which could be the source of this story.

One fact important to the latter development of the steam locomotive by others was that William Murdoch's house at Redruth was next door to that of Richard Trevithick in 1797 and 1798, who could have seen and been influenced by Murdoch's experiments, and who would certainly have been aware of his work in this area.

Murdoch's son John tells of a visit by Trevithick to see a model engine in 1794: The model of the wheel carriage engine was made in the summer of 1792 and was then shown to many of the inhabitants of Redruth - about two years after Richard Trevithick and Andrew Vivian called at my father's horse in Redruth... My father mentions that... on that day they asked him to show his model of the wheel carriage engine which worked with strong steam and no vacuum. This was immediately shown to them in a working state.

Without the support of Boulton and Watt, who appear to have opposed Murdoch's work due to the need to use high pressure steam which Watt distrusted, Murdoch was unable to develop or gain publicity for his invention and it was left to Trevithick and others to develop it commercially later.