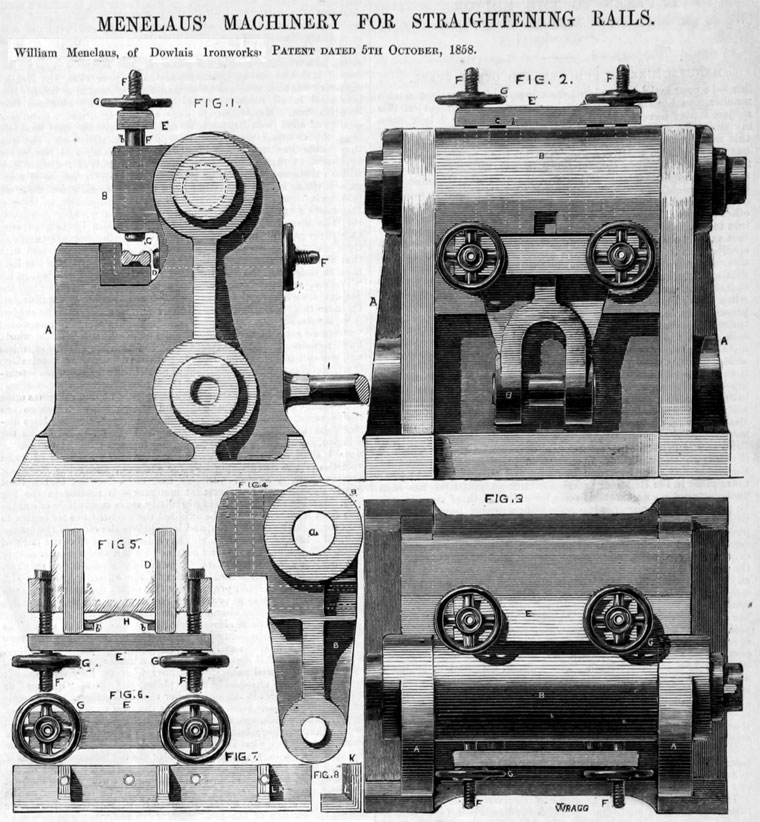 1818 March 10th. Born in East Lothian where his father was a Writer to the Society of Writers to Her Majesty’s Signet at Edinburgh, and his mother's maiden name was Darling.

Apprenticed to an engineering company at Haddington.

1844 Menelaus went to south Wales to remodel a corn mill for Rowland Fothergill of Hensol Park, who persuaded him to stay and manage Fothergill's ironworks at Llwydcoed and Abernant.

c1850 He was asked by Sir John Guest to join the Dowlais Iron Company, where he became the engineer-manager of the mills and forges department.

1852 August 26th. Married Margaret Janet, the second daughter of Jenkin Rhys of the Aberdare Ironworks, but she died just ten weeks later in November 1852. Menelaus did not remarry but he brought up and educated two nephews: William Darling, who became a law lord, and Charles Darling, who became an MP and later a baron.

c.1866 William Menelaus was the first to make use of Tooth and Yates' puddling furnace, which he put to work at the Dowlais Ironworks. He presented a paper on mechanical puddling at the I Mech E's meeting in Paris in 1867[3].

1871 October. Menelaus who went to Spain to negotiate a long-run source of cheaper ores

WILLIAM MENELAUS was of Scotch extraction, having been born in Edinburgh in 1818.

He first entered the service of a Scotch firm of engineers and millwrights; and subsequently came south and obtained an appointment in London. Whilst so employed he was sent to Wales to do some work in connection with a corn mill on the estate of Mr. Rowland Fothergill, at Hensol Castle, Cowbridge. His conduct at that time led to his being offered an engagement at the iron works of Messrs. Fothergill and Scales at Abernant. This offer he accepted, and subsequently became manager of the mills.

In 1814 he was appointed engineer of the Aberdare Works, and in 1851 he became engineer to the Dowlais Works.

In 1856, on the retirement of the late Mr. John Evans, he took the entire management of the latter works, a post which he retained until the time of his death.

Mr. Menelaus' professional history during the past thirty years may be said to be the history of Dowlais. How the works grew under his management is known to all connected with the iron trade, and their growth has not been in size merely but in completeness and in powers of varied production. Mr. Menelaus was an early believer in steel; and the first attempt to carry out the Bessemer process on a commercial scale was made at Dowlais. This first attempt failed; but subsequently, when the details of the process had been further developed, it was again taken up there, and is carried out at Dowlais on an immense scale (see Proceedings 1880, pp. 321-3, and 1874 pp. 239-41).

Mr. Menelaus also took an active part in the development of mechanical puddling, upon which he contributed a paper to the Institution at the Paris meeting in 1867 (p. 151).

He was the founder of the South Wales Institute of Engineers; and he was from the first associated with the establishment of the Iron and Steel Institute in 1869, of which body he was the President in 1875-6; while in 1881 he was accorded the Bessemer medal (Journal 1881, p. 6).

Mr. Menelaus was a particularly well-read man, not only, nor mainly, in subjects connected with engineering; but in history, political economy, and above all in the varied literature of Scotland: probably not many men knew more intimately the poetry of his native land. He was also an earnest lover of art; one of the last acts of his life was to present the town of Cardiff a collection of pictures of very considerable value.

He became a Member of the Institution in 1857, was elected on the Council in 1868, and was for several a Vice-President.

In 1881 he was selected by the Council office of President, but he declined it on account of failing health.

Mr. WILLIAM MENELAUS, of Dowlais, died at Tenby, Pembrokeshire, after a long and painful illness, on Thursday, 30th March 1882.

He was born in East Lothian, Scotland, 10th March 1818, and after education at a local school, apprenticed to a firm of engineers at Haddington, near Edinburgh. After serving his time, he went to London, where he did not remain long.

In 1839 he was at Middlesbrough, erecting - and keeping at work after erection - brickmaking machinery for the Messrs. Pease, who at the time were engaged upon the Middlesbrough Dock. He was afterwards in the service of a company established for the introduction of improved agricultural machinery, and in 1843 was sent by that company to superintend some work at Hensol Castle, Glamorganshire, the seat of the late Mr. Rowland Fothergill, the well-known Welsh ironmaster, who governed the Abernant Ironworks, Aberdare, South Wales, in the days of their prosperity. Mr. Fothergill appreciated the ability of young Menelaus, and offered him the post of assistant engineer at the ironworks, which he accepted. From this beginning, he advanced steadily, became soon chief engineer of the works, and assisted considerably in the extension and improvement of machinery for the manufacture of rails in South Wales.

Under this guidance of Mr. Menelaus, Dowlais grew very much both in size and standing. When Mr. Bessemer, at the British Association meeting at Cheltenham in 1856, announced his great discovery, Dowlais was prompt to take it up, and made a series of experiments, extending over several months, to test its value, but without practical success. Later on, after Mr. Mushet had shown how, by the addition of spiegeleisen, the main difficulty in the way of the Bessemer process had been removed, steel-making was resumed at Dowlais, and grew to an extent equal to, if not greater than, that at any other existing works. Mr. Menelaus also established at Dowlais the manufacture of steel by the Siemens process, the plant which he erected for that purpose being amongst the first designed to carry on the open-hearth process on a large scale in this country.

Mr. Menelaus was one of the first to attempt puddling by mechanical means. In this direction he strove for many years, and he worked regularly puddling machines, respecting which, in a paper read by him before the Institution of Mechanical Engineers, he admitted that he had not succeeded, although the results obtained were encouraging. The main difficulty was to maintain the fettling, and this the Danks' furnace promised for a time to get over, but unfortunately it did not fulfil that promise. It was at this time becoming more and more evident that iron rails were doomed to replacement by steel, and for this reason, perhaps, the chief puddlers of the country discontinued their efforts, and machine puddling was not persevered in.

When the proposal to form the Iron and Steel Institute was put forward in 1868, Mr. Menelaus was one of the first to co-operate in the scheme; and when the Institute was formally constituted in 1869, he was elected a vice-president. This position he continued to hold until, in 1875, in succession to the Duke of Devonshire, Sir Henry Bessemer, and Mr. I. L. Bell, respectively, he became president of the Institute. His presidential address on that occasion was chiefly devoted to a retrospect and consideration of the position of mechanical puddling, and of the applications and prospects of steel. He has also contributed to the "Proceedings" of the Institute a paper on "Improved Machinery for Rolling Rails," describing some improvements which the author during the depression of 1867-68 introduced into the big mill at Dowlais for the purpose of saving labour. Mr. Menelaus was a frequent speaker at the meetings of the Institute, and the high practical value of his criticisms is amply attested by the Journal in which they are recorded.

In May 1881, less than a year before his death, Mr. Menelaus was presented with the Bessemer gold medal, in recognition of his services to the iron manufacture.

Mr. Menelaus was a member of the Institution of Civil Engineers, a member and a vice-president from 1870 to 1873 of the Institution of Mechanical Engineers, and a member of the South Wales Institute of Engineers. He was, indeed, a founder of the last-named society, of which, on the 29th October 1857, he was elected first president, while he was re-elected to the presidency in 1864. To the latter Society he contributed, besides his inaugural address as president in 1857, a paper "On Rolling Heavy Iron," which was read at Newport in 1860.

His contributions to the Institution of Mechanical Engineers embraced a paper "On the large Blowing Engine and new Rolling Mill at Dowlais Ironworks" and "On Mechanical Puddling." The latter subject was one on which he frequently spoke at the meetings of the Iron and Steel Institute, and he acted as Chairman of the Committee established by the Institute to investigate and report upon the merits of the various systems of mechanical puddling. Than Mr. Menelaus, it is perhaps no exaggeration to say that there was no more indefatigable worker in the manufacture of iron and steel, no one who had more thoroughly mastered it in the best practical way, and few if any who enjoyed at Dowlais and elsewhere a stronger and better reputation.