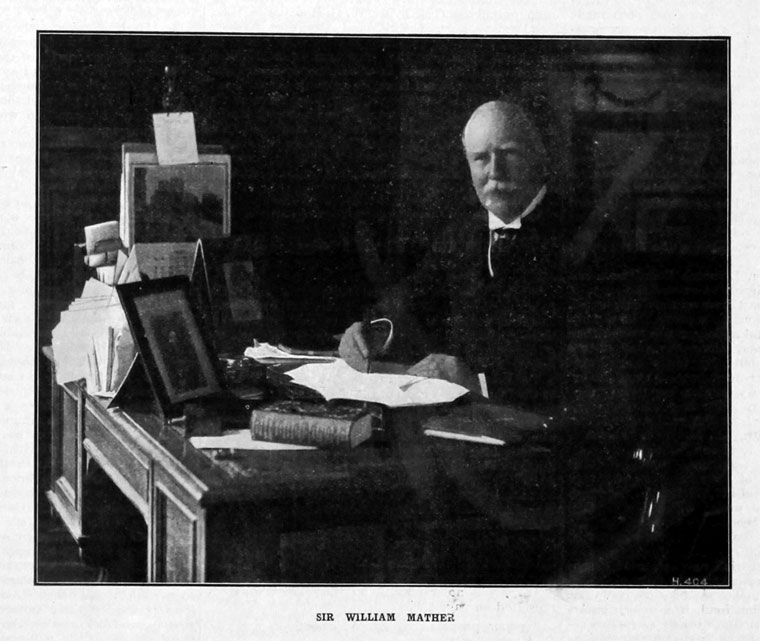 1838 Born in John Street, Manchester, on 15 July , the son of William Mather Senior (d. 1858) and his wife, Amelia. The family operated a small machine works and iron foundry in Salford. W. and C. Mather, which had been established about 1824 by William Mather senior and his father, Colin Mather, who had come to Manchester from Montrose.

1885 Elected as Liberal MP for the southern division of Salford; sat for various other seats after that.

1896 Purchased residences in the country and in London which marked an end to his active business career.

1916 Gave up the chairmanship of the company

Mather and Platt's reputation was based on its ability to supply most of the equipment for a modern mill, which enabled the company to prosper during the growth of the Lancashire cotton industry, helped by Mather's commitment to scientific methods and technical education, his interest in overseas markets, and his promotion of good labour relations.

When only twelve years of age he persuaded his father to allow him to commence his apprenticeship at the Salford Ironworks, which had been founded more than a century ago.

Three years later he was sent to the Continent to continue his education, and after a year or two he returned to Salford to complete his apprenticeship.

At the age of twenty he assisted in the management, and four years later was admitted a partner with his uncle, Colin Mather, and William Platt.

At the age of thirty, the elder partners having retired, he took over the entire control of the business, and subsequently took into partnership Mr. John Platt.

He was the first amongst British manufacturers to establish the forty-eight hours week in 1893. He was an authority on every detail connected with the original line of business of the firm, the manufacture of machinery for the equipment of calico bleaching, printing, dyeing, and finishing works, and many of his inventions are in general use to-day. He was a great authority on Artesian Well Boring, on which subject be contributed a Paper to this Institution. In order to increase the business of his firm he travelled extensively, both in Russia and the United States.

In the latter country in 1883 be made a detailed study of the means for technical education on behalf of the British Government, and the result of his inquiries was largely instrumental in the introduction of the Technical Instruction Bill of 1889, which Mr. Mather, then in Parliament, did much to place on the Statute Book.

When electrical engineering was in its infancy he acquired the manufacturing rights in the Edison dynamo, and started an electrical department at the Salford Iron Works.

This invention was soon improved greatly by the late Dr. John Hopkinson and his brother, Dr. Edward Hopkinson (Past-President).

On his last visit to the United States, when he received the degree of LL.D. at Princeton University, he obtained the rights for manufacturing a reinforced-concrete construction, which has developed into the Indented Bar and Concrete Engineering Co., Ltd.

In 1891 he established the Chloride Electrical Storage Co., and in 1895 he founded the Castner-Kellner Co., for the manufacture of caustic soda and chlorine electrolytically, and of each was the first chairman.

In 1889 the first London tube railway, known at that time as the City and Southwark Subway, was under construction, and the intention was to work it by wire rope. A scheme was prepared by Dr. Edward Hopkinson, at that time Mr. Mather's junior partner, for working the line by electric locomotives, which was carried out by Messrs. Mather and Platt, and the line was opened for traffic in 1890 by King Edward, then Prince of Wales. This line was afterwards extended and known as the City and South London Railway.

He took a great interest in educational matters, and as early as 1873 lie started the Salford Iron Works Science School, at which all the apprentices were required to attend in the evenings. He was the first President of the Association of Technical Institutions.

In 1902 he received the honour of Knighthood, and 1910 lie became a Privy Councillor.

His death took place at Bramble Hill Lodge, his residence in the New Forest, on 18th September 1920, at the age of eighty-two.

He became a Member of this Institution is 1867.

The Right Hon. Sir WILLIAM MATHER died on September 18, 1920, at the age of eighty-three.

He was educated privately and in Germany. He entered the Salford Iron Works, owned by his father in conjunction with Mr. Platt, and at the age of twenty-four was taken into partnership.

In 1871 he was entrusted with the entire management, and six years later, on the retirement of the elder partners, became sole proprietor.

In 1892 the firm was converted into a limited company, with Sir William as Chairman. He entered Parliament as a Liberal and represented South Salford from 1885 to 1886, the Gorton Division of Lancashire from 1889-1895, and the Rossendale Division from 1900-1904, when he retired. He was knighted in 1902, and made a Privy Councillor in 1910.

He was elected a member of the Iron and Steel Institute in 1887.