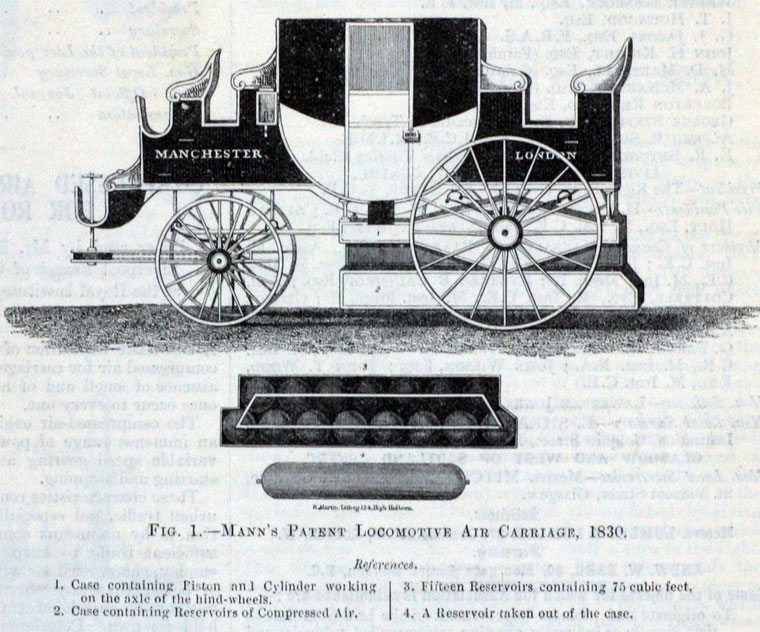 1929 Patent for the application of compressed air to communicate power.[1]

1830 W. Mann, of Brixton published in London a pamphlet, entitled 'A Description of a New Method of Propelling Locomotive Machines, and of Communicating Power and Motion to All Other Kinds of Machinery', and proposed a carriage propelled by compressed air.

William Mann, of Brixton, turned his attention to the subject in 1827, obtained a patent in 1829, and published a pamphlet on the subject in 1830.He advocated compression in stages, now recognised as essential for the production of air at high pressures, and the erection of power stations along the high roads at intervals of 15 to 20 miles, or a continuous iron main with power stations in the coal districts.

The image is reproduced from the plate in Mann's pamphlet. The carriage is provided with 15 reservoirs, having a capacity of 75 cubic feet in the aggregate. This supply Mann deemed sufficient for a run of 14 miles. with air at 32 atmospheres pressure; with air at 64 atmospheres he held that 34 miles could be covered, and at an average cost for power of about a penny per mile.

At this period a good deal was being done in the way of supplying lighting gas in portable reservoirs, much as oxygen and other gases are now sold, and Mann and other inventors make frequent reference to the reservoirs and pumps employed for this purpose. Mann states that the reservoirs in use by the Portable Gas Co for containing gas at 30 atmospheres pressure were 3.5 cubic feet capacity, 12 inches in diameter, and 1/9th inch thick. The inventor suggested a public supply of power by means of compressed air, as has now been carried out in Paris by Messrs. Popp and Conti , (Compagnie Parisienne de l'Air Comprime). He thought, too, that it would be well to make persons confined in Clerkenwell and other prisons earn their dinners by compressing air for the supply of power for propelling His Majesty's mails throughout the kingdom. [3]