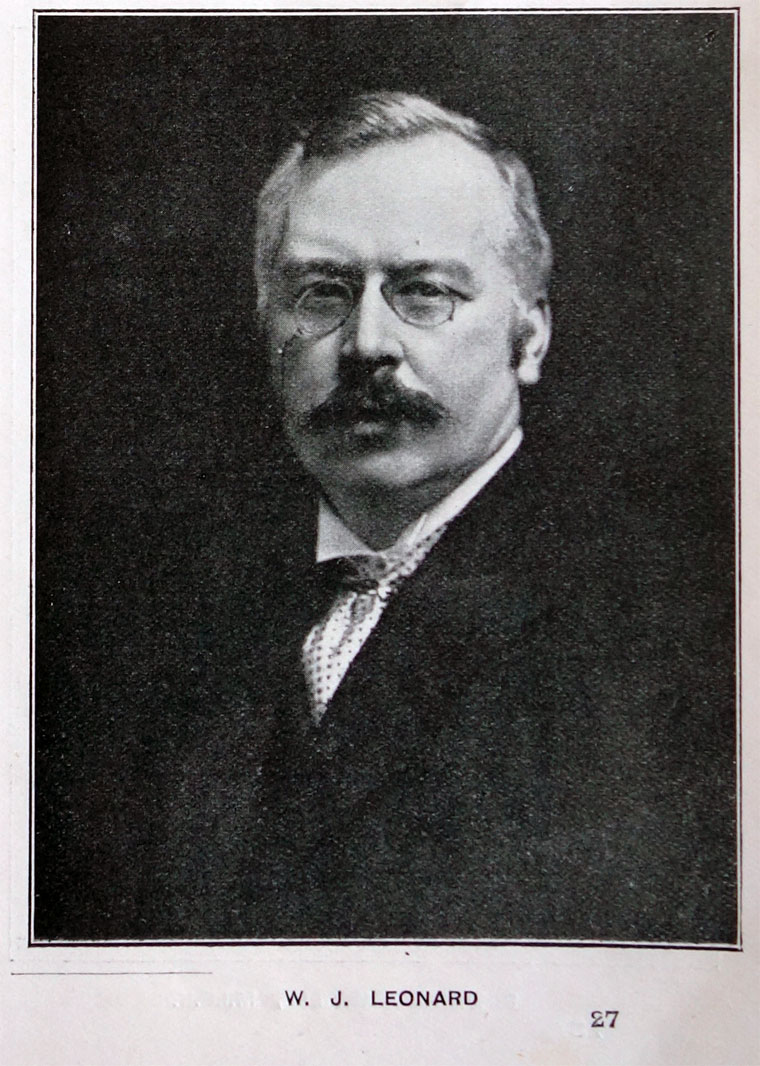 1881 Living in Islington with his parents; in business with his father, importer and refiner of petroleum, etc[1]

1904 LEONARD, W. J., Hope Chemical Works, Hackney Wick, London, N.E. Is senior partner of the firm of Carless, Capel and Leonard, the well-known manufacturers of petrol. Was the originator of the name "petrol," and made the necessary arrangements on the passing of the Light Locomotives Act of 1896, for the carriage and distribution of petrol all over the country. Hobby: Mountaineering. Club: A.C.G.B. & I. (Club Committee.) [3]

LEONARD, W. J.- Born in 1857 and educated at Clifton College, near Bristol, and University College, London, Mr. William John Leonard finally completed his studies at the City and Guilds of London Technical Institute. His connection with automobilism dates from its very earliest days of development in this country. This is not to be wondered at, since, as senior partner of the firm of Carless, Capel and Leonard, of Hackney Wick, he was bound to be consulted by the earliest pioneers upon the most important subject of the "supply of petrol." Thus Mr. Leonard relates that when about twelve years ago Mr. Simms introduced the Daimler motors for launches, he asked him to manufacture a spirit suitable for these motors. "Petrol" was the result, a name, he says, not before associated in this country with the spirit used for motors. This was subsequently found of equal use for motor cars.

Mr. Leonard, on the passing of the Act of 1896, commenced the first negotiations with the railway companies for the carriage and distribution of petrol all over the country. In all the subsequent contentious and not always successful negotiations with railways, he has taken a very prominent part. Amongst his pursuits outside automobilism is mountaineering. Mr. Leonard is a Founder member of this Club, is connected with various scientific societies, has served on the Committee of the London Section of the Society of Chemical Industry, and was in 1897 nominated by the London Chamber of Commerce to give evidence before the Parliamentary Committee on Petroleum.

William John Leonard was senior partner in the firm of Carless, Capel and Leonard, of Hackney Wick, and worked in the petroleum industry for over fifty years.

He was one of the pioneers of the automobile movement, and a Founder Member of the Royal Automobile Club (RAC); from the first he was an enthusiastic believer in the future of the motor car, and was actively interested in the question of transport and storage of inflammable liquids.

Among other useful work on behalf of motorists, he gave evidence for the London Chamber of Commerce before the Select Parliamentary Committee on Petroleum and served on the Committee of the Royal Automobile Club.

He died at Llandrindod Wells on 10th September 1923, after a prolonged illness.

He was elected an Associate of the Institution of Automobile Engineers in 1911.