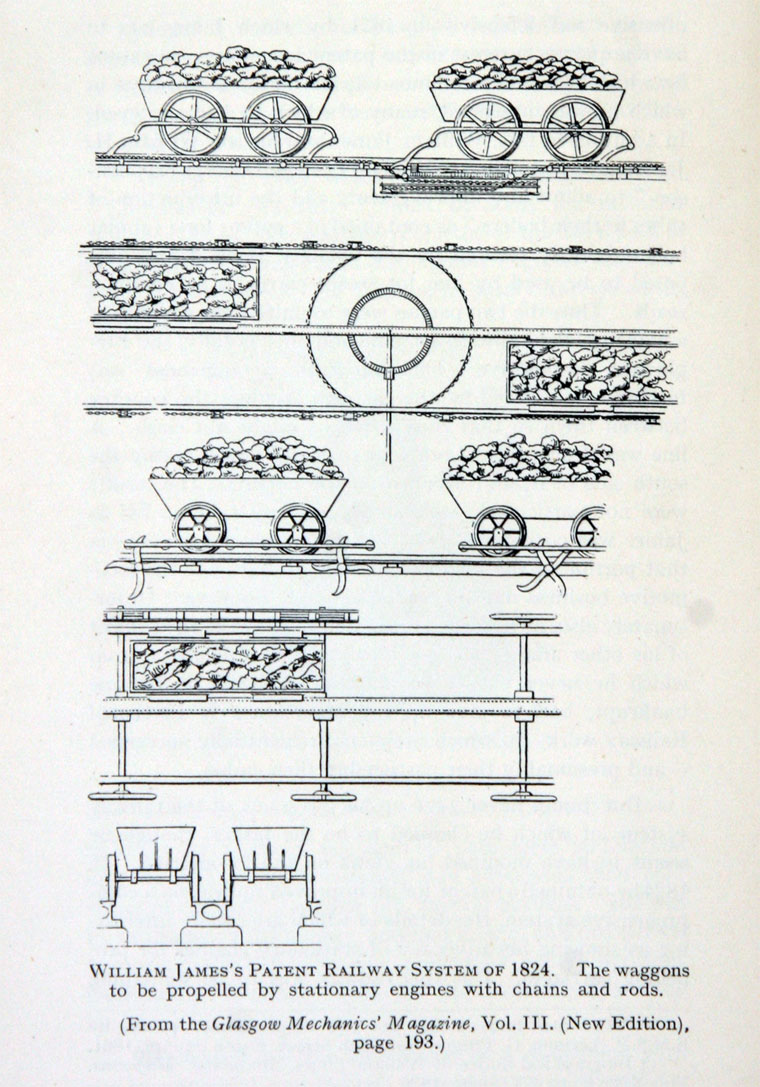 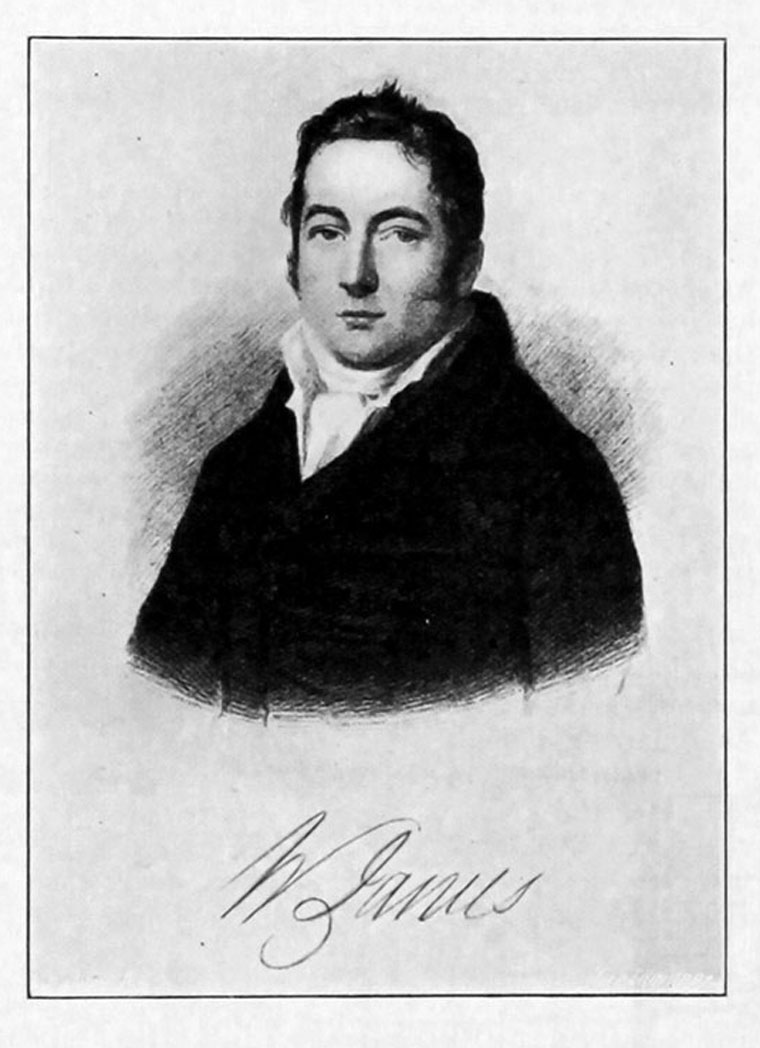 1771 June 13th. James was born in Henley-in-Arden, Warwickshire, England, the son of a solicitor.

After himself qualifying as a solicitor in Birmingham he returned to practice in his home town. A large part of his work was as a land agent for influential local clients and in this way he became involved in coal and canal interests in what is now the West Midlands.

His connection with the engineer George Stephenson resulted from a visit to Killingworth Colliery to see the new steam locomotives at work. After entering a loose financial agreement with Stephenson for the sale of locomotives, James approached Joseph Sandars, a wealthy Liverpool merchant, offering to make the survey for a line to Manchester, partly at his own expense. Although he was assisted in the work by George Stephenson’s son Robert and his own son William Henry James, his route was not accepted by the promoters and it was George Stephenson who completed the line, using information from James’s survey.

In 1823 James published a report describing in detail a scheme to link London with the strategically important ports of Kent, Sussex, and Hampshire ‘by a Line of Engine Railroad’.

After he was discharged from prison he returned to his early profession as land agent, in Bodmin, Cornwall.

1837 March 10th. He suffered from ill-health thereafter and he died with little money. It was not until after his death, when it had become plain that Britain would have a national network of railways rather than merely a collection of lines to serve local needs, was his work recognised: Robert Stephenson acknowledged his contribution to the Liverpool and Manchester Railway, a claim that George Stephenson had never accepted, and a public subscription, endorsed by such engineers as Brunel, Rennie and Locke, was eventually instituted to support his family.

He was educated at Warwick, and at a school at Winson Green, near Birmingham.

After duly serving his articles he commenced practice as a solicitor in his native place about 1797. His business consisted chiefly of land-agency, and having been appointed agent for the Earl of Warwick's property he removed to Warwick, where in 1804 he organised a corps of volunteers.

In the same year he carried out a plan for the drainage and levelling of Lambeth Marsh. A bridge over the Thames, to be erected near the site of the later Waterloo Bridge, formed part of the scheme. His wealth increasing he became a colliery owner in South Staffordshire, and was the first to open the West Bromwich coalfield.

He subsequently became chairman of the West Bromwich Coalmasters' Association, and he was an active promoter of a bill for making a canal from that district to Birmingham.

About 1815 he removed his offices to New Boswell Court, Lincoln's Inn Fields, London, where he carried on one of the largest land-agency businesses in the kingdom. At the same time he made many surveys for the enclosure of commons, and was largely interested in canal undertakings. In conjunction with Lord Whitworth, the Duchess of Dorset, Mr. Vansittart, and others, he embarked upon what proved a very costly and futile search for coal at Bexhill in Sussex. An account of this boring appeared in the 'Standard,' 20 April 1889.

James's connection with the establishment of railways constitutes his chief claim to remembrance. His attention had been directed to the subject of 'tramways' as early as 1806. Railways worked by horses were well known in the colliery districts of the north of England in the last century. James's notion was to extend this system over the country, but the application of steam as a means of propulsion did not at first occur to him.

He seems to have constructed several short lines of railway in various parts of the kingdom, and to have proposed and surveyed many more. In 1820 he drew up a ' Plan of the Lines of the Projected Central Junction Railway or Tram Road, showing its communications with the Coalfields, Canals, and Principal Towns, and with the Metropolis, which was not apparently published till 1861, when it was printed in the pamphlet entitled 'The Two James's and the Two Stephensons,' by E. M. S. P.

In the autumn of 1821 James paid a first visit to Killingworth and saw Stephenson's steam locomotive engine at work. His active mind at once perceived the capabilities of the machine, and Stephenson, impressed by James's wealth, commercial reputation, and energy, agreed, along with his partner Losh, by deed dated 1 Sept. 1821, to assign to James one-fourth of the interest in their locomotive patents, dated respectively 1815 and 1816, on the condition that James should recommend and give his ' best assistance for the using and employing the locomotive engines ' on railways south of an imaginary line drawn from Liverpool to Hull (Mechanics' Magazine, 18 Nov. 1848, p. 500). James's efforts to carry out the agreement failed, and Stephenson derived no benefit from it.

James, however, had heard earlier in 1821 that a project for constructing a railway between Manchester and Liverpool was afoot. He at once communicated with Joseph Sandars, a wealthy Liverpool merchant, who was prominently connected with the scheme, and was allowed to begin, partly at his own expense, in the summer of 1821, a survey of the line, which was completed in the next year. Robert, the son of George, Stephenson assisted James in the work (Smiles, Lives of George and Robert Stephenson, 1868, p. 243). The route proposed by James was not that eventually adopted, and he finally disagreed with the promoters.

In May 1824 Sandars informed him that his delays and broken promises 'forfeited the confidence of the subscribers,' and his connection with the undertaking ceased. The work was completed by George Stephenson, who had the benefit of James's plans and sections, and the assistance of Padley, James's brother-in-law. Writing in November 1844 to James's eldest son, Robert Stephenson said: 'I believe your late father was the original projector of the Liverpool and Manchester railway.'

In 1823 James published a 'Report to illustrate the Advantages of Direct Inland Communication through Kent, Surrey, Sussex, and Hants, to connect the Metropolis with the Ports of Shoreham (Brighton), Rochester (Chatham), and Portsmouth, by a Line of Engine Railroad, and to render the Grand Surrey Canal, Wandsworth and Merstham Railroad, Shoreham Harbour, and Waterloo Bridge Shares productive property.' The scheme was well thought out in detail, and showed that James clearly perceived the capabilities of a railway worked by locomotive steam-engines. The Report was intended to be the first of a series of twelve reports upon rail way communication in various parts of England, but nothing further appeared.

Although James was at one time reported to be worth £150,000 and to be earning £10,000 a year from his practice, his affairs fell into confusion; in 1823 he was declared bankrupt, and was imprisoned in the King's Bench. Shortly afterwards he retired to Bodmin in Cornwall.

In 1824 he obtained a patent for hollow rails for railways, but it was of no practical importance. All his efforts to retrieve his position were unsuccessful, and he died at Bodmin on 10 March 1837.

He married in 1796 Dinah, daughter of William Tarlton of Botley, and left a family unprovided for.

In 1845 an attempt to raise a fund for the benefit of his sons was made, but although Robert Stephenson, Joseph Locke, I. K. Brunei, George Rennie, and other eminent engineers attested that to James's self-denying efforts the public were indebted for the establishment of the railroad system, the scheme failed (Mechanics' May. 21 Oct. 1848, p. 403).

In 1858 Robert Stephenson described James, in a letter to Mr. Smiles, as 'a ready, dashing writer,' but 'no thinker at all in the practical part of the subject he had taken up. . . . His fluency of conversation I never heard equalled.'

A portrait of James, after a miniature by Chalon forms the frontispiece to vol. xxxi. of the ' Mechanics' Mag.