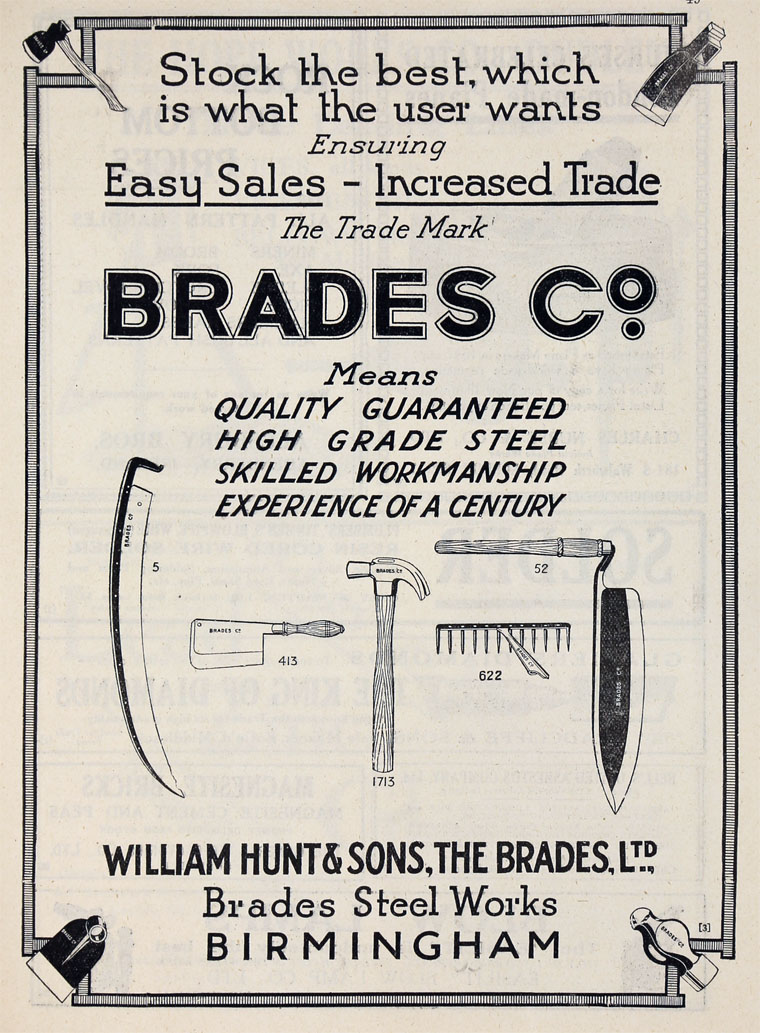 Also known as William Hunt and Sons, The Brades, Ltd[1]

1793 WHS was originally started; the initials stand for William Hunt and Sons of Brades Steel Works.

1851 William Hunt and his sons, William and Edwin, established works at Wednesbury[3]

1960 Brades Nash were acquired by Spear and Jackson.

1985 Neill Tools purchased Spear and Jackson and inherited the WHS name. In the building trade, the WHS initials are affectionately referred to as "Work Hard or Starve".

Today, Neill Tools are the owner of the WHS brand name, and they are the largest British-owned hand tool manufacturer, with its world wide headquarters in Sheffield and a further plant in Birmingham. They also have offices in the USA, Australia and New Zealand and employ almost 2000 people, exporting to 118 countries on every continent operating under the major brand names of Spear and Jackson and Eclipse.

The brand leading brick and pointing trowels are roll-forged in Sheffield from one solid piece of metal, a skilled job and one which is little changed since it first began so many years ago. Despite technological advances, it is still very much a hand crafted product with heavy reliance on the skill of the operator to roll it correctly.

Despite roll-forging being labour-intensive, it is still the most cost-effective method of manufacture for the required quality level. The name Spear and Jackson now discretely appears below the WHS logo.

1996 The contribution of trowels to British archaeology was acknowledged when Spear and Jackson sponsored the 20th bi-annual British Archaeological Awards, presented for the greatest initiative and originality in British archaeology.