Grace's Guide is the leading source of historical information on industry and manufacturing in Britain. This web publication contains 145,031 pages of information and 230,666 images on early companies, their products and the people who designed and built them. 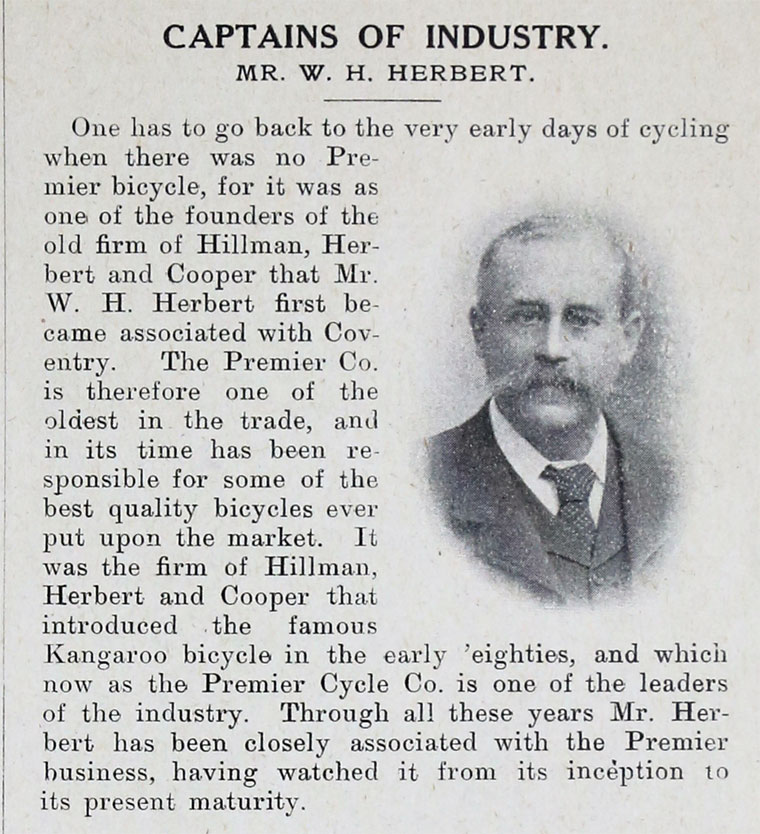 1850 Born in Leicester the oldest son of William Herbert (1826-1908), building contractor and farmer, and his wife, Sarah Anne, née Thompson (1831- ). The extent of the Herbert family fortune was considerable. His father, in addition to owning a town house in a salubrious area of Leicester, was the largest landowner in the parish of Whetstone, south of Leicester. His younger brother was Alfred Herbert

By 1870 Herbert had returned to Leicester; William Hillman, having set up in business, produced a roller skate in his spare time.

1875 Hillman took his roller skate to Leicester and looked up his old acquaintance; Herbert gave him an introduction to the owner of the local rinks, to whom he sold the skate. The upshot was that Mr. Hillman and Mr. Herbert started in business together; at their "Premier" works in Coventry they made sewing machines.

William Henry Herbert (nicknamed "Tubby") was the financial man in the partnership of Hillman, Herbert and Cooper. His chief hobby was hunting[3].

1887 Director of Coles and Matthews.

1891 Founding director of the Premier Cycle Co Ltd which had been formed to buy out Hillman, Herbert and Cooper[6].

1894 (?) Became chairman of Alfred Herbert when his brother Alfred bought out his partner and turned Herbert and Hubbard into a limited liability company, Alfred Herbert Ltd.

1911 Obituary. Of the Grange, Coventry aged 60 years. Founder of Premier Cycle Co and remained a director until his death. Also interest in Alfred Herbert Ltd. [9]

By the death of Mr. William Henry Herbert, of Coventry, the cycle trade loses one of its most well-known men.

Mr. Herbert was born in Leicester in 1850 and at the age of eighteen migrated to Coventry, where he built up a large cycle business. The deceased, who was over sixty years of age, had been in a very delicate state health for a long time, and though lately he had appeared somewhat better, his precarious condition necessitated a nurse being in regular attendance. Saturday afternoon he went for a motor drive, returning home shortly after six in the evening. On entering the house he seemed bright and cheerful, but soon afterwards became seriously ill. A doctor was at once called in, and attended the patient, but within twenty minutes death ensued from heart failure.

Mr. Herbert was a widower, his wife having died two years ago last November. He leaves two sons and one daughter. He was the elder brother of Mr. Alfred Herbert who was identified with the formation the Cycle Manufacturers' Trade Protection Association, and was president for some time. He acted in similar capacity in connection with the National Cycle Show during the same period.