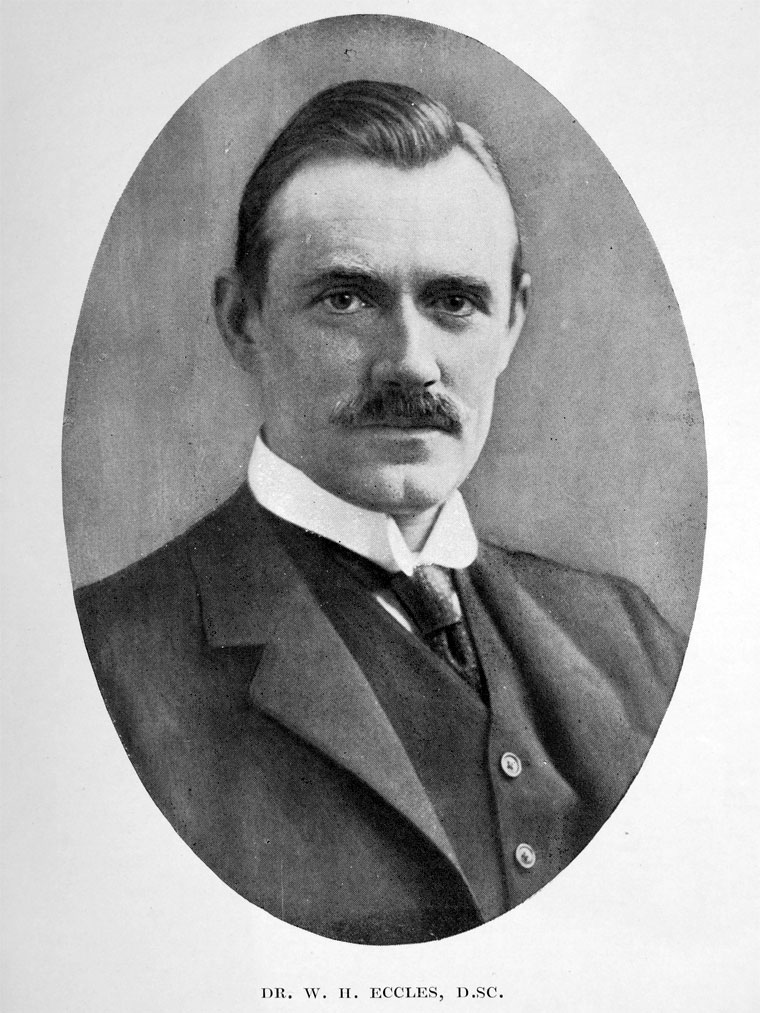 Dr. William Henry Eccles D.Sc., A.R.C.S., M.I.E.E., F.R.S., (1875-1966) was a British physicist and engineer notable for being an early associate of Guglielmo Marconi, for his theory of radio propagation via ionic refraction in the upper atmosphere, and for being the co-designer of the Eccles–Jordan trigger circuit, now better known as the "flip-flop".

Educated at home[1] and privately.[2]

1898: Graduated B.Sc. (First Class Honours in physics.) from the University of London.[3][4] Appointed demonstrator in the Physics Laboratory at the College.[1]

1899: Became one of Marconi's early assistants at the Marconi Company, working on "jiggers"[3] (high frequency oscillation transformers). Developed a bench-based method for testing coherers[3][5] an early form of radio-wave detector. He was also involved in the design of the masts to be used at Poldhu for the transatlantic experiments.[2] Much of this work was conducted at the Haven Hotel near Poole. [1]

1900: Succeeds Erskine-Murray as the head of technical work at the Marconi Factory.[6]

1900: Left the Marconi Company to assume the post of head of the mathematics and physics department of the South Western Polytechnic in Chelsea.[2]

1910- Carried out significant research on the oscillating crystal.[6]

1912: Refined Heaviside's explanation of radio wave propagation through reflection in the upper atmosphere with his theory of ionic refraction, and described the part played by sunlight.[7]

Eccles was the operator of a pre-WW1 experimental wireless station with the callsign EWX (later 2BA), a founder member of the Radio Society of Great Britain (RSGB) and long term champion of amateur radio in the UK.

1913: Appointed Honorary Secretary of the Radio Telegraphic Committee of the British Association.[8]

1913: Elected Member of the Institution of Electrical Engineers, M.I.E.E.

During the First World War, Dr. Eccles acted as advisor to the War Office, the army council, the wireless technical committee of the air force, and to the Admiralty.[2]

1916: On the death of Silvanus P. Thompson, Eccles was appointed to succeed him as Professor of Applied Physics and Electrical Engineering at the City & Guilds Technical College, Finsbury.[2]

1919: With F.W. Jordan, Professor Eccles read the paper before the British Association (Section G -Engineering) outlining the Eccles-Jordan trigger, the first digital circuit. The paper describes a circuit that:

..when operated by a small triggering electrical impulse, undergoes great changes in regard to its electrical equilibrium, and then remains in the new condition until re-set.

The design is for what later became known as the "flip-flop", a key component of the computing revolution.[2] The paper was later published in The Electrician[9] and in The Radio Review[10]

1919-1920: Vice-chairman of the Imperial Wireless Telegraphy Committee[3], also known as the "Norman" committee after its chair Sir Henry Norman.

1921-1922: Vice-chairman of the Wireless Telegraphy Commission, set up to provide detailed technical advice further to the Norman Committee recommendations. Although, in the main, the proposals of the Committee (and the Commission) were not followed up, the design of the G.P.O station at Rugby was based on the report recommendations.[4]

1923: Member of the Sykes Committee, commissioned by Parliament to investigate BBC funding and its monopoly position.[11]

1926: Retired from his Professorship at the Finsbury Technical College to become a consulting engineer[2][13].

1926: Chaired an independent committee (the 'Eccles Committee') set up to report on Capt. P.P. Eckersley's "Regional plan" to allow the BBC to provide regional services rather than town- and city-based services[14]. The Committee endorsed the BBC's plan.

1926–27: President of Institution of Electrical Engineers.