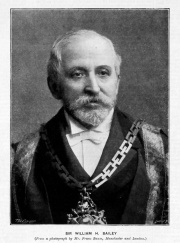 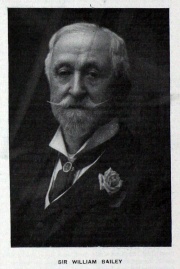 1861 A turret clock maker, living in Salford with his parents and siblings[4]

1865 (16th September) Married Jane Dearden Dorning; they had 4 sons and one daughter.

Inventor of many pyrometers, testers and pumps, and other mechanical devices used in blast furnaces, mines, torpedo boats and waterworks. He designed the testing apparatus for the concrete and cement used in the Eddystone Lighthouse.

1887 President of the Manchester Association of Engineers; supported the concept of the government inspection of boilers[7].

1891 Director of the Manchester Ship Canal[8]

1899 Sir W. H. Bailey was a director of the Canada Petroleum Co as well as W. H. Bailey Ltd and the Manchester Ship Canal Co[10].

1906 President of the Library Association of Great Britain

Sir WILLIAM HENRY BAILEY was born at Salford on 10th May 1838, and attended the Manchester Grammar School until he was 14 years of age.

On leaving school he entered the Albion Works, which had been established in 1838 by his father - Mr. John Bailey — in Oldfield Road, Salford, on the site of the present large works of Sir W. H. Bailey and Co., Ltd.

In 1866 he became proprietor and sole manager of the concern.

He was knighted by Queen Victoria on the royal yacht in 1894 on the occasion of Her Majesty opening the Manchester Ship Canal. Sir William was one of the promoters of the Manchester Ship Canal, and was a member of the Provisional Committee, having taken part in the famous "round table" conference at The Oaks, Didsbury, the residence of the late Mr. Daniel Adamson. He was one of the directors at the formation of the Ship Canal, and at the time of his death was the only member of the present Board who had been connected with it from the commencement. He was a Justice of the Peace for the County of Lancaster and also for the County Borough of Salford.

In 1905 he designed and presented a mace to the Victoria University of Manchester. In order to perpetuate the memory of Dr. James Prescott Joule, the discoverer of the Mechanical Equivalent of Heat, and who was a native of Salford, Sir William deposited with the Treasurer of the County Borough of Salford a sum of money to provide a silver medal annually to be known as the "James Prescott Joule Commemorative Medal," for the students of Salford and Manchester and the Institution of Civil Engineers for the best essay on Physical Science or Engineering, preference being given to the Paper dealing with the transformation of energy.

Sir William was an old Volunteer, and he assisted to form No. 3 Company of the 56th Lancashire Volunteers, which afterwards became the 3rd V.B. Fusiliers. He served a good many years in the Battalion, and had always been a strong supporter of the Territorial Force. He was a member of the National Reserve. Apart from his active business and public life he found time to write a large number of books and to deliver lectures on various subjects.

In collaboration with Professor Tyndall, Sir William carried out a number of experiments on Sound at various south coast ports with the object of giving a plainer and clearer language to mariners and lighthouse keepers. He strove to induce the Government to adopt the Morse Code as the alphabet of the sea, so that ships could by day or night, in fog or storm, communicate with each other, avoid collision, exchange news and give readier help in shipwreck and disaster.

He was responsible for many inventions, and, together with other members of the family, was identified with nearly one hundred specifications during the period 1857 to 1912.

His death took place suddenly at the Savoy Hotel, London, on the 22nd November 1913, at the age of seventy-five.

LANCASHIRE has produced many remarkable men, but few with more indomitnble energy than the late Sir W. H. Bailey, whose death occurred with suddenness in a London hotel on Saturday last.

Sir William was in his seventy-sixth year, and was in apparently the best of health until the seizure to which he succumbed. He was of a typical Lancashire type, and extremely proud of his county.

He was born in Salford in the year 1838, being the son of John Bailey, a man of engineering talent, who was employed in the works of Sharp and Roberts, a firm well known in its time. John Bailey became subsequently in 1839 the founder of the firm now known as Sir W. H. Bailey and Co., Limited, at whose work William Henry was apprenticed. John Bailey's inventive genius seems to have been inherited by his son, whose earliest patented invention is dated 1858 . This was for a machine for preparing and combing wool. Since that date W. H . Bailey's name has been associated with about l 00 patents covering a very wide field, such as speed, flow, pressure and vacuum gauges, sewing machine, telegraph cable , lubricators, boiler fitting , pumps, hydraulic motors, governors, hot air engine , clocks, valves, dynamometers, and fusible plugs. He designed the apparatus used for testing the concrete and cement used in the construction of the Eddystone Lighthouse and carried out experiments on sound in collaboration with Professor Tyndal.

At an early age the management of the Albion Works, Salford, devolved upon William Bailey, and 1865 he bought them. The principal product of the works at that time were lathes, steam engines, turret clocks, and copying presses. Under the active supervision of the new owner, however, the number and variety of the articles manufactured grew with great rapidity. In course of time the firm turned its attention to the production of steam boiler and engine fittings, pressure gauges, electric telegraph instruments, bells, pumping machinery etc., until at the present time the appliance turned out require a catalogue of many hundreds of pages for the enumeration.

In some reminiscences published quite recently Sir William relates how delighted he was when one day an old mechanic saluted him and said: "You are John Bailey's son?" and when he replied in the affirmative the mechanic said: "Do you know what we called your father when he was at Sharp and Roberts? We called him Johnson's Dictionary, because he was always chipping in when anybody mispronounced a word." The father's love of literature could scarcely have been greater than that of the son. He was an omniverous reader and a great lover of Montaigne's works, which he used to quote as frequently as he did Shakespeare. Some idea of his literary bent maty be gathered from the fact that in 1906 ho was president of the Library Association of tho United Kingdom, and had been president of the Manchester Shakespere Society, the Manchester Literary and Philosophical Society, the Manchester Field Naturalists' and Archaeological Society, the Manchester Dickens Fellowship, and the Manchester Arts Club.

Sir William was elected president of the Manchester Association of Engineers in 1885, and was also a member of the Institution of Mechanical Engineers and the Iron and Steel Institute.

Although much occupied in business, Sir William found time to devote to municipal affairs. He was elected on the Salford Borough Council in 1874, was made an Alderman in 1880, and became the Mayor in 1893. It was while he was Mayor of the borough that he received a. knighthood at the hands of Queen Victoria when she Yisited Manchester to open the Ship Canal.

He was a great advocate of this wonderful waterway, which converted an inland town into one of our great seaports and supported its construction by taking up a large number of shares in the undertaking. As a man Sir William enjoyed a wide popularity. His sympathies were catholic, and he could talk well on many subjects. He maintained to the last a keen and active interest in his business. An inventor himself, he could appreciate inventiveness in others and nothing was brought to him that showed any likelihood of success that he did not examine it with care. For many years two of his sons, Messrs. Alfred and Fred, have been working with him. and the works will now be carried on under their management.

Sir WILLIAM HENRY BAILEY died on November 22, 1913. He was managing director of W. H. Bailey & Co., Limited, Albion Works, Salford, and a director of the Manchester Ship Canal Company. He was born in 1838, and was the son of Mr. John Bailey, of Pendleton.

He was educated at Manchester Grammar School. As a youth he displayed considerable inventive capacity, and before he was twenty-one he had brought out several successful patents. He was the inventor of a great variety of pyrometers, testing appliances, and pumps, in addition to mechanical appliances used in blast-furnaces, mines, torpedo-boats, and water-works. The concrete and cement testing apparatus used in the construction of the Eddystone Lighthouse were designed by him, as well as recording instruments for irrigation and drainage works in India. He was one of the original promoters of the Manchester Ship Canal, and was knighted in 1804 by Queen Victoria on board the first ship which passed through the canal.

He was the author of numerous pamphlets on scientific and literary subjects.