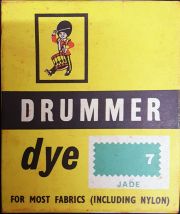 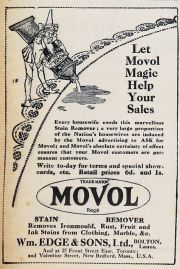 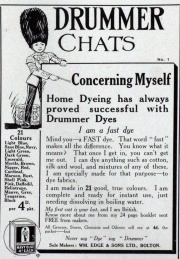 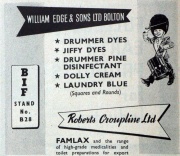 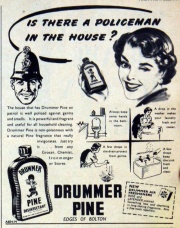 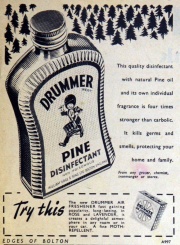 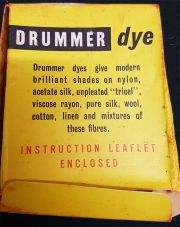 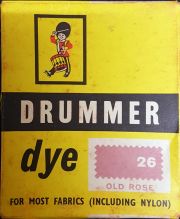 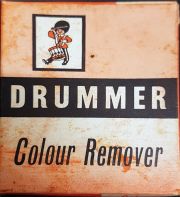 Blue was a household bleach - a block of blue on a stick - which was added to laundry to get it "sparkling white".[1]

1870s In Bolton, in the early 1870s, William Edge, who for many years represented Halliwell on the Town Council, started a business for shading blues, used by bleachers and finishers in Lancashire.

The firm expanded and, as William Edge and Sons Ltd, special shading blues, special tints for cotton and linen fabrics and their cotton softeners, Cloth glazes and fillers, bleachers' soap etc, found a ready market in America, Canada, India, France, Holland, Belgium, Sweden, as well as in the various bleachworks in the UK.

By the 1920s, the name Edge had become identified with two famous household words in particular, "Dolly" and "Drummer", because as national advertisers for many years they had been supplying Edge's Dolly Blue for household laundry work, Dolly Cream for curtains, and Dolly tints for ladies' blouses and the like, to the housewives of Britain. Their well-known trademark of the drummer boy (associated with Drummer Dyes for home dyeing) was famous throughout the world.

Other popular lines made by the firm included Movol, a stain remover, which completely obliterated all traces of ironmould, ink or other stains on material such as linen, and Simirol, a neat and efficient way of cleaning metals such as silver.

Although the headquarters and factory were in Raphael Street, Bolton, the firm had warehouses and offices in London, Dublin, Belfast, Glasgow, New York and Melbourne. By this time the chairman of the company was Sir Knowles Edge, son of the late William: he had been knighted in 1919.

The firm was not content with solely the manufacture of Dolly Blue and its other household products, so they started to make radios and gramophones in Bolton under the Drummer name, as a subsidiary to the main firm.

1933 A report in the Bolton Evening News said that: "Honours went to Bolton at Radiolympia, London, today, when newcomers in the world of radio set manufacturers, Edge Radio, Ltd, pulled off the sale of the day by disposing of the largest model in the exhibition, a 10-valve superhet radiogram, 5ft 6in high, 4ft broad, (1.7m x 1.2m) priced 150 guineas (£157.50).

1934 The success of the radio firm caused some problems because sets could not be produced quickly enough to satisfy demand. This was exacerbated by the success at Radiolympia that year, when the firm exhibited an imposing set 5ft 9in high, and 5ft 6in wide, (1.75m x 1.67m), "in the form of a modern sideboard, in which is fitted a complete cocktail bar."

As with many of Bolton's old firms, however, progress overtook Edges, even though the company had obviously expanded over the years.

1968 The paper reported the loss of around 200 full-time jobs, following the closure of two factories owned by the Dolly Blue firm of William Edge and Sons Ltd in Raphael Street and Gladstone Street, Halliwell. The factories were run down gradually over the next nine months. This was due to new methods of doing the household wash that greatly reduced sales in the Dolly Blue line - even though the company produced many other familiar lines. .

The closure came as a result of re-organisation following the merger of William Edge (Holdings) Ltd within the Reckitt and Colman Group. Other Bolton subsidiaries of the firm, which included Roberts Croupline, Roberts Patent Filling Machine, and Germstrong, were not affected; but in 2002, those subsidiaries had also gone.