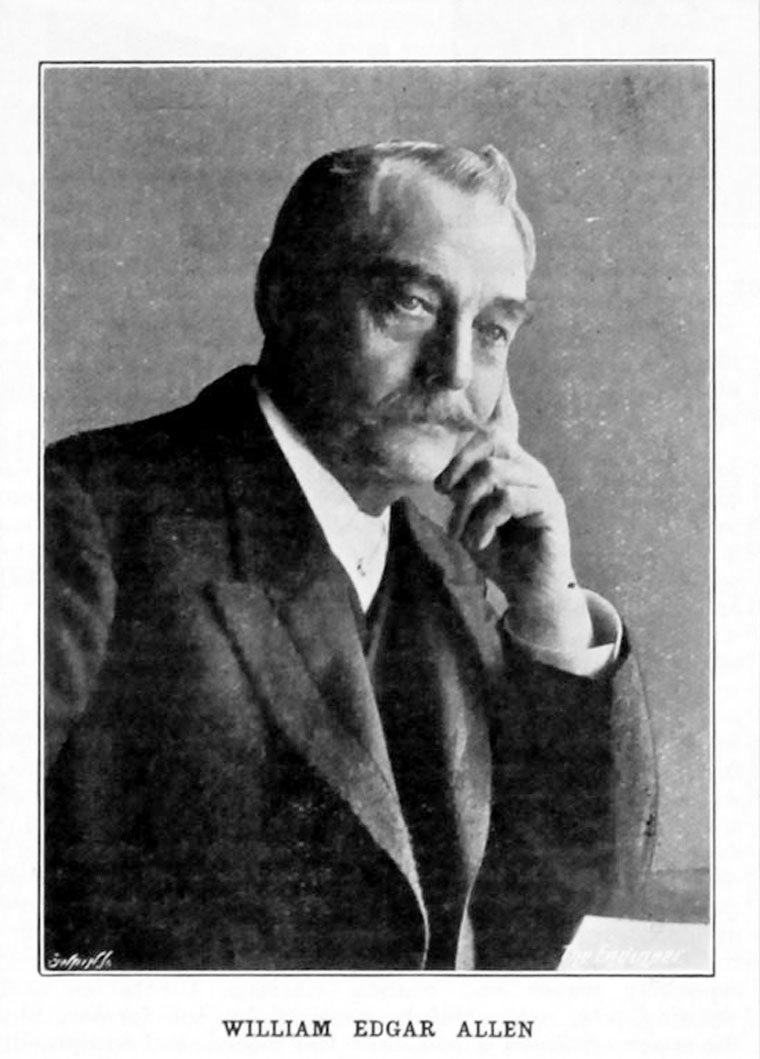 WILLIAM EDGAR ALLEN was born in 1837.

He was sent at an early age to Paris, where he received his education at the College Chaptal. He went later to Holland and Germany, and subsequent residence in Spain, Portugal, and Italy enabled him to speak most of the European languages.

Previous to starting in business for himself, he travelled over the Continent as representative for Messrs. Ibbotson Bros. and Co., of Sheffield, steel and railway plant manufacturers.

In 1890 the business was converted into a limited company, of which he was chairman, but he otherwise retired from active participation in the conduct of the business.

Besides other donations, Mr. Allen gave, in 1909, the Edgar Allen Library to the University of Sheffield, and founded, in 1911, the Edgar Allen Institute for medico-mechanical treatment, in Sheffield, the first institution of its kind in this country. This has proved especially beneficial during the present war, a great number of soldiers having recovered the use of their limbs through the efficacy of the treatment. He was one of the oldest Freemen of the Cutlers' Company, having been elected in 1870.

His death took place in Sheffield on 28th January 1915, at the age of seventy-seven.

He was elected an Associate of this Institution in 1880.

WILLIAM EDGAR ALLEN died on Thursday, January 28, 1915, at his residence, Whirlow House, on the outskirts of Sheffield, at the age of seventy-seven. His earlier education was carried out at home and was completed at Paris, after which he visited, and for some time resided in, Holland, Germany, Spain, Portugal and Italy. During this period of his career he became an accomplished linguist, and also availed himself of the facilities at his disposal to acquire an insight into the requirements of the markets of those countries, with the result that upon his return to Sheffield he determined to devote himself to supplying those demands.

The firm of Edgar Allen & Co., Ltd., which is known as the Imperial Steel Works, was established in 1868 and reconstructed in 1903, when the business of Messrs. Askham Brothers & Co., Ltd., and the Yorkshire Steel & Engineering Works, Limited, were taken over. When the firm was converted into a limited liability company the first colleagues of Mr. Allen on the Board were Mr. R. Woodward, Mr. A. E. Wells, and Mr. F. A. Warlow. The Company was registered in 1901, with an authorised capital of £525,000.

Owing to the state of his health he had to spend much of his time abroad, but, although unable, from this cause, to take an active part in the public life of Sheffield, he was a generous patron of the city, to which he made many benefactions. He founded the Edgar Allen Institute for Medico-mechanical Treatment and built and endowed the Edgar Allen Library of the Sheffield University, to which he gave £10,000. The University conferred upon him, as a mark of the esteem in which he was held, the honorary degree of Doctor of Letters. He was one of the oldest Freemen of the Cutlers' Company, and was an Associate Member of the Institution of Mechanical Engineers.

He was elected a member of the Iron and Steel Institute in 1900, and was a constant attendant both at its meetings in London and at its visits abroad.