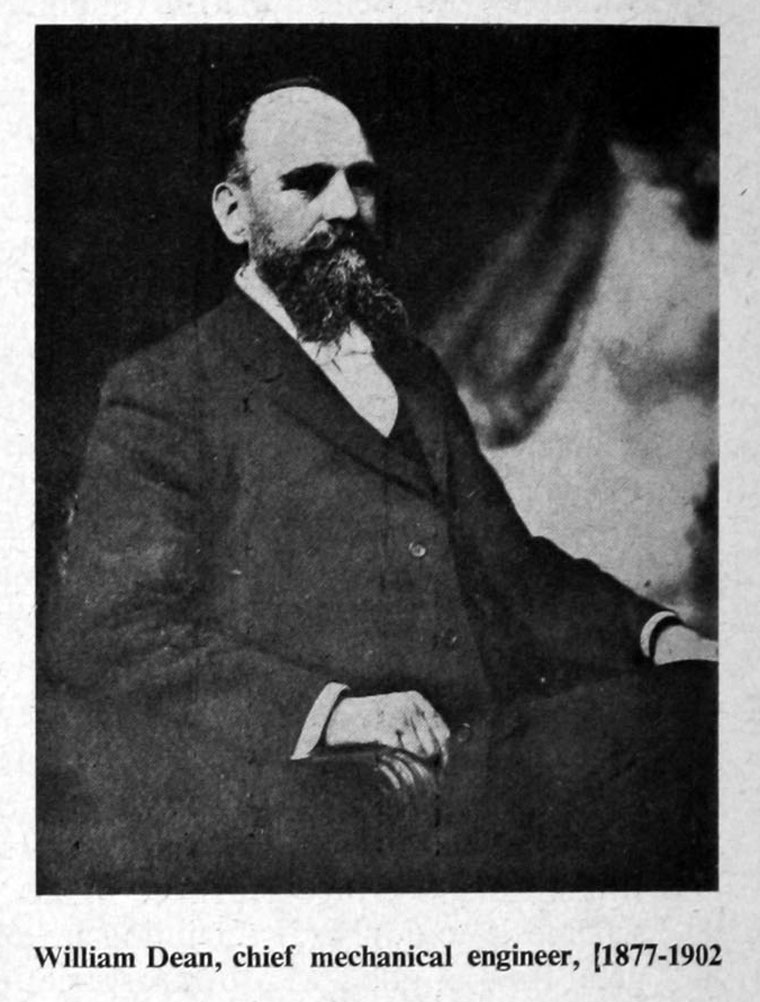 1886. Express engine with outside valve gear for the Great Western Railway. 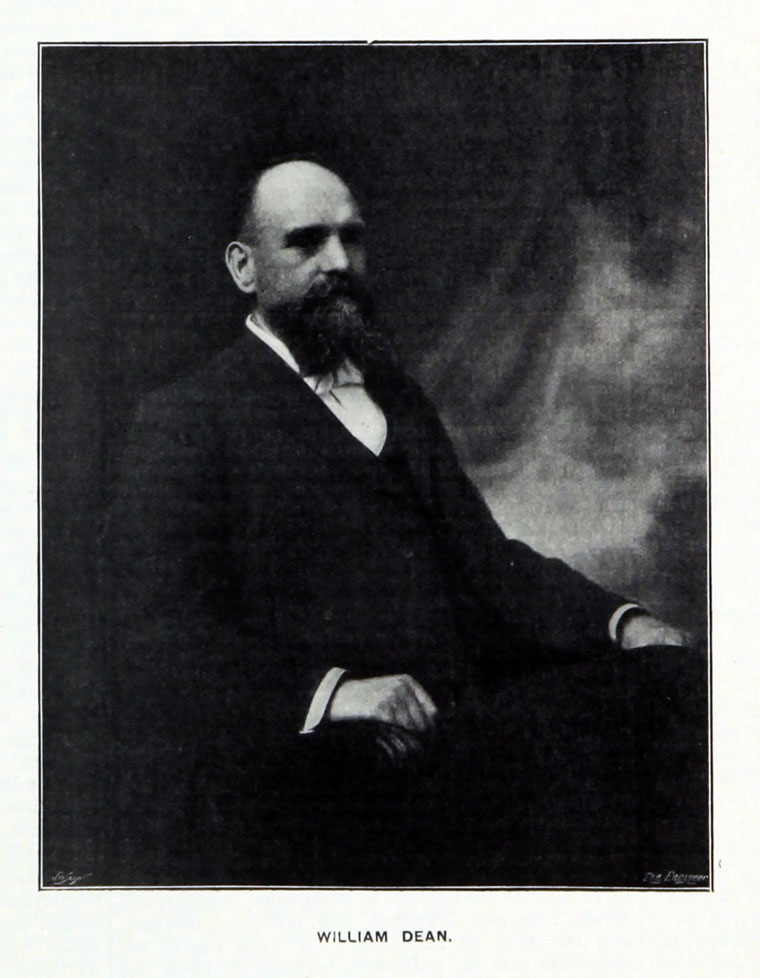 William Dean (1840-1905) of the Great Western Railway presided over the conversion from broad to standard gauge under Daniel Gooch. Also transverse sleeper compartments and all-corridor trains. He was the Chief Locomotive Engineer for the GWR from 1877, when he succeeded Joseph Armstrong. He retired from the post in 1902 and was replaced by George Jackson Churchward. He designed famous steam locomotive classes such as the Duke Class and Bulldog Class.

Following an early education at the Haberdashers' Company School, he was apprenticed at the age of fifteen to Joseph Armstrong at the Great Western Railway's Wolverhampton Stafford Road Works. During his eight year apprenticeship he attended Wolverhampton Working Men's College in the evening, excelling in mathematics and engineering. Upon completion of his apprentice years in 1863 he was made Joseph Armstrong's chief assistant.

A year later, Joseph Armstrong was promoted to the position of the GWR's Chief Locomotive Engineer and moved to Swindon Works. George Armstrong, Joseph's brother, succeeded him as Northern Division locomotive superintendent, with Dean under him as Stafford Road works manager. This arrangement lasted until 1868, when Joseph Armstrong made Dean his chief assistant in Swindon.

1889 His wife Ellen Nicholls Happinell died at Clevedon. She was the eldest daughter of Edward Cousins. [1]

Dean was ill during his final years as Chief Locomotive Engineer, and he increasingly allowed Churchward to take on the day-to-day responsibilities. He retired in June 1902 to a house that had been bought for him in Folkestone.

WILLIAM DEAN was born in London on 9th January 1840, and received his education at the Haberdashers' Company's School.

Having completed his apprenticeship, he was appointed in 1863 chief assistant at Wolverhampton to Mr. Armstrong, who in 1864 was removed to Swindon as chief locomotive and carriage superintendent of the whole of the Great Western system. While holding his position at Wolverhampton, Mr. Dean undertook the management of the works at Suffolk Road, Wolverhampton, where about 850 men were employed.

In June 1888 he was also removed to Swindon, and was appointed chief assistant superintendent to Mr. Armstrong. On the latter gentleman's death in 1877, Mr. Dean was appointed to succeed him, and held the position until he retired, owing to ill-health, twenty-five years afterwards, in June 1902.

Under him the works at Swindon had during that time grown greatly, the number of men employed being about 13,000; and during his long experience he saw the introduction of many improvements in connection with the railways of this country. To his skill and ingenuity are due a number of changes, which resulted in greater comfort and convenience to passengersIn 1893 he contributed a Paper to this Institution on "Tensile Tests and Chemical Analyses of Copper Plates from Fire-boxes of Locomotives on the Great Western Railway," which was read and discussed in conjunction with the Second Report to the Alloys Research Committee.

He took a keen interest in the Volunteers, and joined their ranks in the early "sixties"; while at Swindon he worked very hard in connection with his regiment, and held the rank of major. He was also a Justice of the Peace for Wiltshire.

His death took place after a long illness at his residence in Folkestone, on 24th September 1905, in his sixty-sixth year.

. . . many years was the Chief Locomotive Superintendent of the Great Western Railway . . . [much more]

WILLIAM DEAN died on Sunday, September 24, 1905, at his residence, 10 Terlingham Gardens, Folkestone, at the age of sixty-five. After being educated privately at New Cross, he entered the service of the Great Western Railway Company, being apprenticed at the age of sixteen to the late Mr. Joseph Armstrong, at that time locomotive superintendent of the narrow-gauge division of the railway, which had its headquarters at Wolverhampton. He also devoted his leisure to attending classes at the Working Men's College, Wolverhampton. Soon after the completion of his apprenticeship, in 1863, be was appointed chief assistant, and in the following year, when his chief was removed to Swindon as chief locomotive and carriage superintendent of the whole of the company's system, lie became manager of the railway works at Stafford Road, Wolverhampton.

Four years later he rejoined his chief at Swindon, and in 1877, on the death of Mr. Armstrong, he became chief locomotive superintendent. In this position he had control of over 13,000 men, and carried out work of the greatest importance. He was an ardent supporter of the volunteer movement, and was an honorary colonel. He was a Justice of the Peace for Wiltshire. and a liveryman of the Haberdashers' Company.