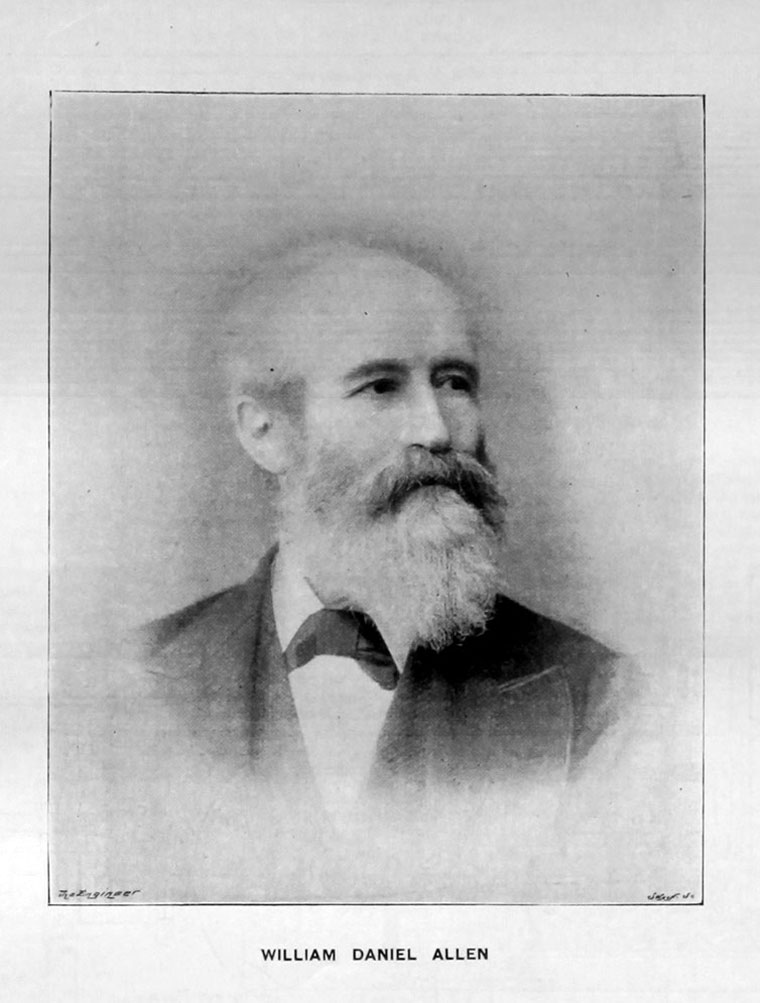 He was closely associated with the development of Bessemer Process having been partner (and his brother-in-law) and good friends with Henry Bessemer.

Born at Chalfont, a village near Amersham, and educated at a London college.

At the age of fifteen he became an apprentice to Sir Henry Bessemer, who married his sister.

He worked on many of Bessemers projects including the manufacture of the bronze powder which is used in gold work, japanning, gold printing, &c., now known as Bessemer gold bronze.

1854 Allen went to America to supervise the erection of machinery invented by Mr. Bessemer for crushing the sugar cane and refining sugar, out of which sprang several patents.

He made valuable contributions to the process in various ways. One was the Allen agitator, which proved very successful. With this mechanical appliance the more perfect mixture of steel is ensured.

"Three out of my five assistants have died, and if the other two were to die and myself, too, no one would know what the invention is."

1890 May. Mr. Allen was presented, with the Bessemer Gold Medal of the Iron and Steel Institute. Sir James Kitson, of Leeds, made the presentation, and Sir Henry Bessemer bore an ungrudging testimony.

Mr. Allen, who was a director of the Carlton Main Colliery, took no part in politics or other public affairs. His time was divided between his commercial pursuits, travelling abroad, and such characteristically English sports as shooting, fishing, hunting, and even tennis.

He had a family of three sons and three daughters, all the latter being married. Mrs. Allen predeceased him in 1893.

His funeral took place at Ecclesall Churchyard, in the suburbs of Sheffield. [2]

WILLIAM DANIEL ALLEN died at Endcliffe, Sheffield, on October 24, 1896, at the age of seventy-two years.

Born at Chalfont, in Buckinghamshire, he was educated in London, and at the age of fifteen was apprenticed to Sir (then Mr.) Henry Bessemer, with whom he has ever since been intimately associated.

In 1854 Mr. Allen went to America to supervise the erection of Bessemer's patent sugar-cane crushing and refining machinery. He also took an active part in the early experiments and subsequent development of the Bessemer steel process, and on the erection, in 1857, of the steel works at Sheffield he took over the entire management of the works, devoting himself laboriously and persistently to improve the quality and manufacture of steel. The first two years were mainly spent in further experiments, and the success of his management was signally complete, both from a scientific and a commercial standpoint.

On the expiry of the partnership, after fourteen years' working, it was found that the firm had divided in profits fifty-seven times the capital embarked in the process, or 100 per cent. for every two months for twelve years; while the works, which had been largely extended out of revenue, were sold for twenty-four times the amount of the whole subscribed capital. In all, the partners received eighty-one times their original capital in fourteen years. This out of an invention which the Sheffield firms eyed askance. "I had immense difficulty," wrote the discoverer, "in persuading any one to touch it; indeed, neither the steel-makers nor the iron-makers would take it up after the lapse of two years," and from an establishment which started with a plant producing two or three tons per day, and employing a score of hands, now the Bessemer works produce over 2000 tons of steel per month, cover three acres of ground, and find work for a large number of people. Of course there are many larger establishments, even in Sheffield; for the intention of the founders was not so much to secure a large output, as to instruct those firms who wished to acquire the right to manufacture.

Mr. Allen, as the man on the spot, had to encounter many difficulties, but he never faltered in his faith in the ultimate success of his efforts. He lived to see his hopes fully realised, and to witness, as he had predicted, that the Bessemer process must eventually revolutionise the steel world.

In using spiegeleisen for recarburising iron that has been wholly decarburised in the converter, much difficulty had been, experienced in making a perfect mixture of these very different qualities of metal; and in order to remedy this defect, Mr. Bessemer invented and patented, on January 13, 1863, a mechanical agitator for thoroughly stirring the mixed metals while in the casting-ladle, and thus producing perfectly homogeneous ingots. Mr. Allen at once recognised the great advantage of this improvement, and has the credit of being the first, if not the only steel manufacturer to adopt it.

The agitator is an iron rod about 1 inch in diameter; in one end is made a long aperture, through which is inserted the blade or plate of iron, twisted at each end. The ladle of steel, when it is turned out of the vessel, is brought beneath the agitator and raised by a hydraulic crane, immersing the blade and a portion of the rod in the steel. By means of rotatory motion, while the ladle is lowered and raised, the metal is thoroughly stirred. The stirring operation was found by Mr. Allen to be very simple in practice, causing no delay or inconvenience, and costing almost nothing; while the result in his own words, was that " Every ingot formed from the lowest charges was found by analysis to be perfectly uniform in temper and quality, while the thoroughly homogeneous quality of every part of the same ingot was evinced by its behaviour under the hammer or in the rolls, as well as in hardening and tempering." The same process is still largely in use to this day. Mr. Allen patented some valuable inventions for furnaces used in heating, and hydraulic machinery for manipulating steel.

In recognition of the great work he had done in bringing about the age of steel - which Sir Henry Bessemer had prophesied would supersede the age of iron, as iron had superseded the age of bronze - Mr. Allen was presented, in May 1890, with the Bessemer Gold Medal of the Iron and Steel Institute. The specific work for which this distinction was bestowed on him was his early successful service in manufacturing a high quality of Bessemer steel.

When the original partnership expired in 1877, Mr. Allen took over the whole business, and converted it into a private limited liability company, consisting of himself and his family. In 1889 a number of shares were made available for the public. Mr. Allen, who was a director of the Carlton Main Colliery, took no part in political or other public affair.

He was elected a member of the Iron and Steel Institute in 1872, and contributed papers to the Proceedings, in 1881 on the use of a mechanical agitator in the manufacture of Bessemer steel, in 1883 on Bessemer steel in its cast and unwrought state, and in 1891 on the forging press.