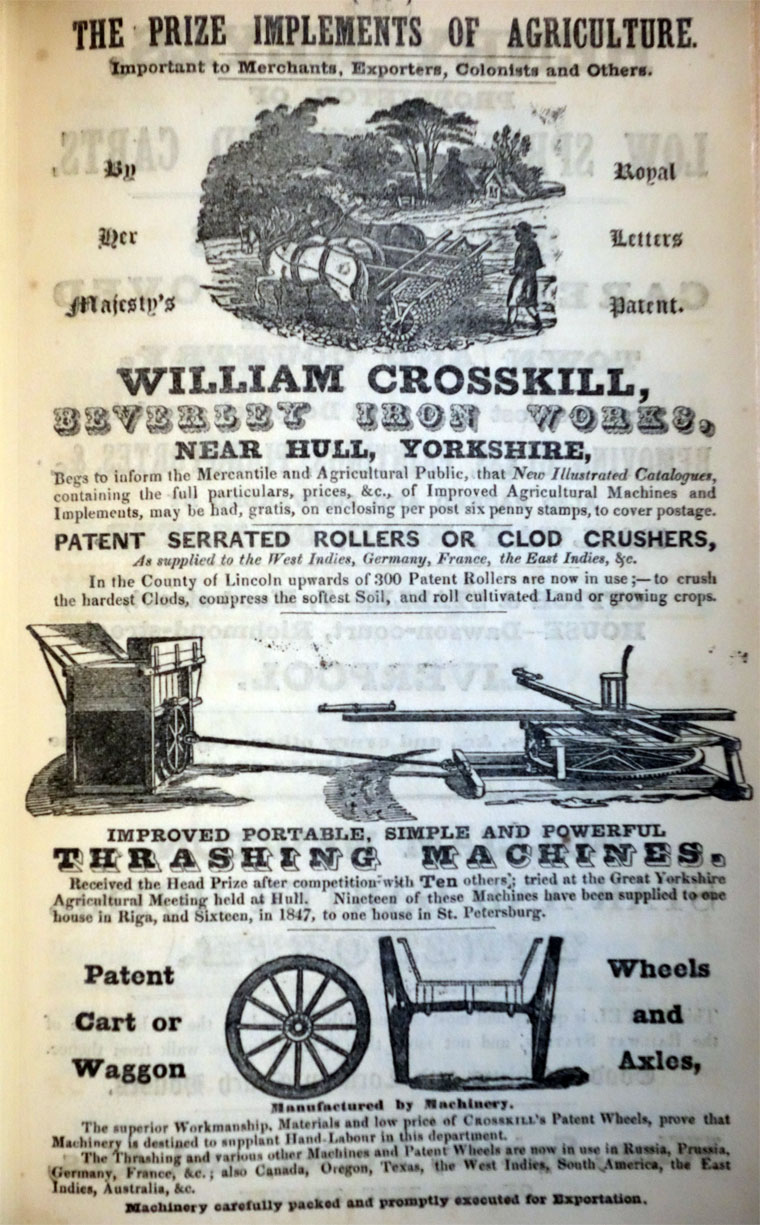 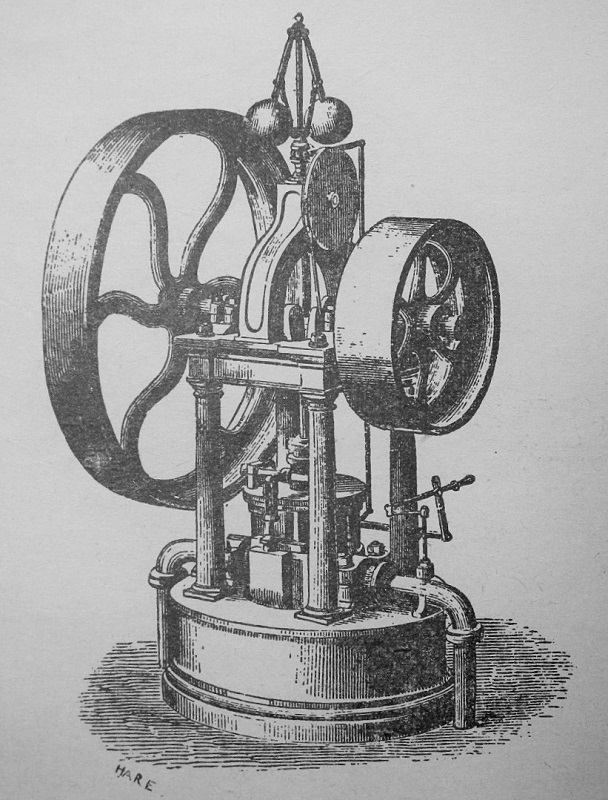 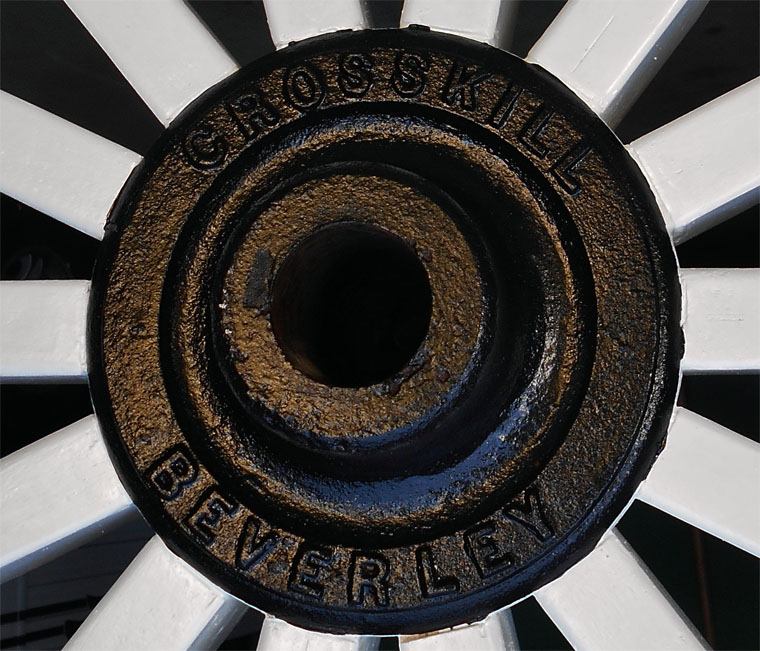 2017. Crosskill Beverly Solid Manure Spreader Thrower Wheels (located at The Southern Fleurieu Historical Museum at Port Elliot in South Australia). Specs: 56 inches in diameter, 4 inches wide on the flat of the steel rim 2 inch axle hubs, hubs have Crosskill Beverly cast on the out side and serrated gearing cast into them on the inside.

of Beverley Iron Works, near Hull

1825 Established by William Crosskill, a whitesmith, who made articles in cast iron, such as railings and lamp standards for the Beverley gas undertaking.

1830s expanded into the manufacture of agricultural machinery in the 1830s and increasingly concentrated on this area.

1847 the year of the collapse of the railway boom, Crosskill's was in difficulty and was mortgaged to the East Riding Bank.

1849 A branch in Liverpool sold kits of emigrants' tools. His catalogue shows a wide range of machines, the best known being the clod-crusher, of which he had sold 2,478 by 1850, but he also produced ploughs, harrows, and threshing machines.

1861 William's sons, Alfred and Edmund carried on business in Beverley as A. and E. Crosskill, which became William Crosskill and Sons in 1864.


TO be sold by Tender, the old established and well-known ironfoundry and agricultural implement manufactory, called The Beverley Iron Works, situate at Beverley, in the county of York, with the steam engines, boilers, steam pipes, shafting, and gearing now standing thereon.

The premises occupy about 6A. 0R. 27P. of ground, and comprise four fixed steam-engines; large and convenient workshops, show-rooms, huge timber and other sheds, and timber yards, implement yard, and every requisite convenience for carrying on the businesses, of an ironfounder and agricultural implement maker on a very extended scale.

The workshops are amongst the largest, most commodious, and best fitted up in the kingdom.

A very extensive business has been for above 30 years carried on at the manufactory, first by Mr. William Crosskill and afterwards by his trustees; about 400 workmen are generally employed on the premises.

There is a short private railway from the manufactory into the Bridlington branch of the North-Eastern Railway, which runs close by the works.

The establishment and its capabilities are well known to agriculturists throughout the Kingdom. In 1856 several Government orders for 1,333 carts and 1,237 waggons, comprising 2570 in the whole, were, executed within 34 weeks, and another Government order for 500 carts and 600 waggons was executed on the premises between the 1st January and the 22nd March in last year, in addition to making 3500 barrows for the Government within the same period.

The manufactory is in full working order, and the business connection is most extensive.

The purchaser will have to take the steam saw mills and other machinery, tools and patterns (excepting only the steam engines, boilers, shafting, gearing and steam pipes) on the premises at the time of sale at a valuation. This machinery is of a very superior description, and is fitted with most of the modern improvements.

The purchaser will also have the privilege of taking, if he thinks proper, but not otherwise, the stock of timber which may be on the premises at a valuation. This stock of timber is believed to contain one of the largest and most valuable in England, suitable for the manufacture of agricultural implements in the hands of any private firm.

Sealed tenders, under cover, for the purchase of the premises are to be delivered at the chambers of the Master of the Rolls, in Chancery-lane, London, addressed to his Chief Clerk, Mr. George Whiting, before twelve o'clock at noon, on the 30th day of July, 1863. The vendors do not bind themselves to take the highest tender.

The purchaser will have to sign a contract with the conditions of sale, which the Judge has approved of.

The manufactory can be viewed on application to Mr. Thomas Ellery Turner, of Beverley, and printed particulars and conditions of sale may be had (gratis) in London, of Messrs. Hollings, Sharp, and Ullithorne, Solicitors, No, 1, Field-court, Gray's-inn; and Messrs. Johnson and Weatherall, Solicitors, King's Bench-walk, Temple; and in the country, of Mr. John Blythe Robinson, Solicitor, Beverley, and Messrs. Leemau and Clark, Solicitors, York.