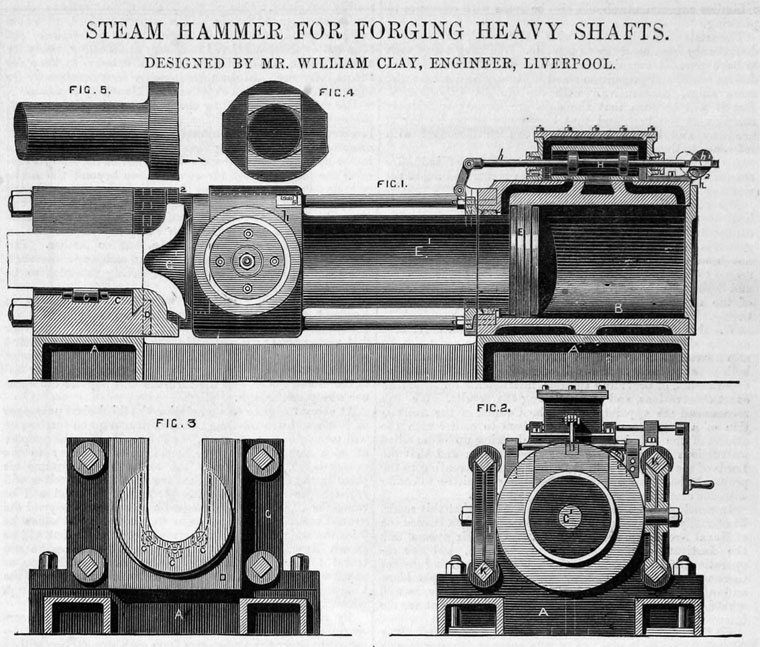 1865 Patent application by William Clay, of the Mersey Steel and Iron Works, Liverpool, in the county of Lancaster, Ironmaster, in respect of the invention of "improvements in the mode of working hydraulic lifts."[2]

On leaving school he went into an ironworks near Glasgow, where he became manager at a very early age. When the works were closed by the owner he took to mercantile pursuits for a time. These however were not in accordance with his taste, which was more of a mechanical and scientific turn, and soon developed itself; for in 1848 he devised a method of rolling taper bars, and offered his invention to Mr. W. J. Horsfall, of the Mersey Forge, Liverpool. The invention was adopted, and he was asked to assume the management of the works, which at that time were not financially successful.

Among the various improvements there effected by him was the introduction of a night shift, the works having previously been kept going during the day only; the turn-out was thereby doubled within a year, and the following year saw it again doubled, with the realisation of a profit for the first time for many years.

It was from his designs and Under his superintendence that about this time the so-called "Monstre" gun, the largest piece of wrought-iron ordnance then in existence, was forged, bored out to the calibre of 13 in., and completely finished. It weighed 22 tons, and threw a projectile of 300 lbs. to a distance of 5 miles, which was thought a great achievement in those days, though of course eclipsed by modern guns. It was presented to the Government by Mr. Horsfall, and after being severely tested by the Ordnance select committee, was finally mounted at Tilbury Fort.

Shortly after Mr. Horsfall's death Mr. Clay became partner in the works, the value of which had been doubled from the profit realised under his management, without any extra capital leaving been raised; while a working capital had also been set aside equal to their original value.

He was the first to introduce in this country the manufacture of Puddled Steel on a large scale, and turned out large quantities of this material in various forms. The plates for the steamer built for Dr. Livingstone's expedition in Central Africa were manufactured by him of this steel, their weight being only 4 lbs. per square foot.

The whole of the new works, by which the Mersey Forge was gradually enlarged to the magnitude of a leading establishment, including the laying-out of the ground, the roofs, and the massive machinery, were designed by him.

In 1864, the works having been transferred to a company, he ceased to have the control, and very soon terminated his connection with them.

In conjunction with Mr. C. A. Inman and Captain McNeile he then established the Birkenhead Forge, where his abilities were similarly successful.

He was looked upon as one of the first ironmasters of the day; and his unbroken success in turning out the heaviest marine shafts and other forging' was owing in no small degree to the fact that his men had the most perfect confidence in him. He could take his place, and often did so at the smithy, the puddling furnace, the shingling hammer, &c.; showed that he was as well able to execute with his own band as to design.

He was very frequently engaged as arbitrator in disputes in the iron trade, his intimate knowledge of all its branches making his opinion of much value.

While at the Mersey Forge he formed a volunteer artillery corps, composed at first almost solely of those employed there; under his command it grew to the strength of 950 men, and he attained the highest rank that could be reached among the volunteers, namely that of Lieut.-Colonel Commandant, which he resigned only a few mouths before his death, after having retained the command of the corps for twenty years.

He became a Member of the Institution in 1859, and was for some years a member of the Council, and also a Vice-President.

In 1872 he contributed a paper on a hollow turning tool, cooled with water, for turning metals at increased speed.

In the same year he was a most energetic and successful Chairman of the Local Committee for the Summer Meeting of the Institution in Liverpool.