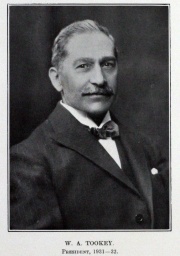 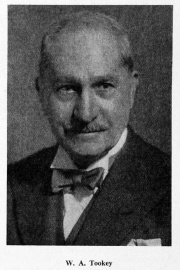 THE death of Mr. W. A. Tookey, which occurred at his home at Bromley, Kent, on Tuesday last, February 9th, will be deeply regretted by the many engineers who knew him, and particularly by the older members of the profession. For more than forty years Mr. Tookey practised in Westminster as a consultant, and also took an active part in the work of the engineering institutions.

William Alfred Tookey was born at Greenwich on June 9, 1871, and received his general education there at the Roan School. Subsequently, he studied at the Birkbeck Institute, in London, and began his practical training as an engineer with two Greenwich firms, A. H. Bateman and Co., Ltd., and Appleby Brothers, Ltd.

In 1889, Mr. Tookey joined the staff of Tangyes, Ltd., remaining with that firm for the next fifteen years. For a start he was engaged in the drawing-office, and later on had charge of the department which was responsible for the installation of steam, gas and oil engines and the pumps made by the firm.

Mr. Tookey started to practise as a consultant in Westminster in 1905, specialising in matters concerned with all kinds of powerhouse machinery and power transmission appliances, and particularly with the application and operation of internal combustion engines. In connection with the latter, it may be recalled, he evolved a method of comparing the output of power from internal combustion engines with the relative richness of charge, which method has been known since 1914 as the "Tookey Factor."

Amongst the work which Mr. Tookey undertook in his earlier years in Westminster was the surveying and testing of more than 1000 engines fed by public gas mains in the London area, a task which was carried out for the Gas Light and Coke Company and the South Metropolitan Gas Company.

Mr. Tookey retained his practice in Westminster until towards the end of the second world war, when bomb damage to his office compelled him to conduct his professional affairs from his home. It cannot be said that he retired, for, although in recent years he had reduced his activity, his interest in technical matters remained as keen as ever.

The part that Mr. Tookey took, throughout his long career, in the work of various professional institutions was no small one. He was elected a member of the Institution of Mechanical Engineers in 1912, served for some years on its Oil Engine Trials Committee, and contributed several papers to its Proceedings. He was also a member of the Institute of Fuel, the Diesel Engine Users Association, and the Association of Consulting Engineers, and, for a time, served as chairman of the internal combustion engine panel of the British Standards Institution.

Mr. Tookey's valuable and continuous work for the Junior Institution of Engineers is well known. He became a member in 1904, served successively as chairman, treasurer, and for a period after the first world war as honorary secretary, and was elected president in 1937. All who have attended the annual dinners of the "Juniors" will remember with particular pleasure Mr. Tookey's felicitous discharge of the office of toast-master, calling, with the spanner as a gavel, members and guests alike to take wine - and sometimes snuff - with the President! The geniality which W. A. Tookey showed not only on these, but on all occasions, combined with his technical ability and his readiness to help at all times, were characteristics which will not be quickly forgotten by all who knew him.

William Alfred Tookey was a consulting engineer, and a specialist on power plants, gas producers, and internal combustion engines. He was also an expert witness in arbitration and litigation, and the author of several books including the Gas Engine Manual.

Part of his technical education was gained at the Birkbeck Institute, and afterwards he received his practical training in the works of A. H. Bateman and Company, Ltd., Greenwich, and later with Appleby Brothers, Ltd., Greenwich.

He was in the service of Tangyes, Ltd., Birmingham and London, from 1890 until 1905, and in the latter year commenced in practice as a consulting engineer, his chief works including tests on a large number of engines supplied by public gas mains throughout the London area.

He was the originator of a method for comparing the output of power from internal combustion engines with the relative richness of a charge, called the `Tookey Factor'.