1868. Standard outside cylinder for the North London Railway. 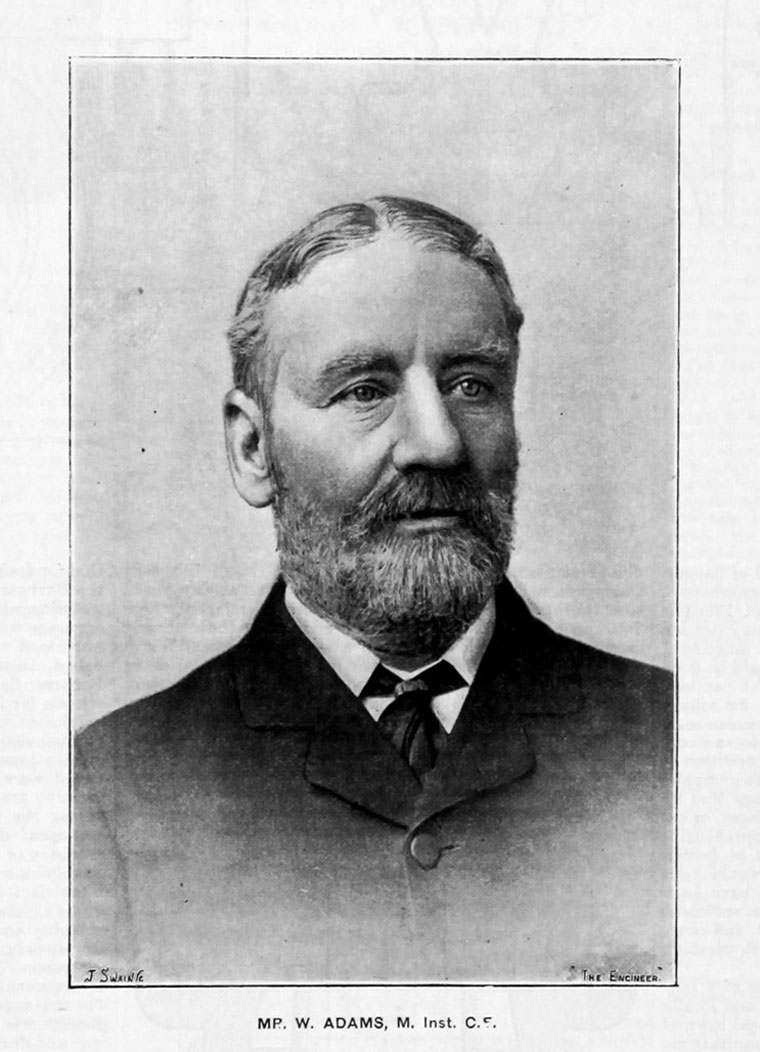 He is best known for his locomotives featuring the Adams Bogie, a device with lateral centering springs (initially made of rubber) to improve high-speed stability. He should not be mistaken for William Bridges Adams (1797-1872), a locomotive engineer who invented the Adams Axle — a radial axle box used on locomotives of William Adams's design.

1823 May 15th. Born in Mill Place, Limehouse, London, where his father (John Samuel Adams?) was resident engineer of the East and West India Docks Company.

After private schooling in Margate, Kent he was apprenticed to his father's works. The railway surveyor Charles Vignoles had previously worked on the construction of the London dock basins and this association then secured a position for Adams as an assistant in his drawing office. The final years of apprenticeship were spent at the Blackwall works of Miller and Ravenhill, builders of engines for steamships.

In 1848 Adams became assistant works manager for Philip Taylor, an ironfounder, millwright and former assistant to Marc Brunel, who had set up workshops in Marseilles and Genoa to build and install marine engines. Fluent in French and Italian, Adams soon found himself effectively the superintendent engineer for the Royal Sardinian Navy, although still nominally working for Taylor. (The Kingdom of Sardinia then encompassed Genoa and much of what is now north-west Italy.) In 1852 he married Isabella Park, the daughter of another English millwright working in Genoa, and returned to England.

On his return to England, Adams initially worked as a surveyor: considering possible routes for a railway on the Isle of Wight, overseeing construction work at Cardiff Docks and planning and equipping new workshops at Bow for the East and West India Docks and Birmingham Junction Railway, soon to change its name to the North London Railway. This led to his appointment as the company's locomotive engineer in 1854, a post he held for eighteen years. Here he introduced his noted series of 4-4-0 tank engines, the first to utilise the laterally-sprung bogie, and the first continuous train brake.

In 1873 Adams took up a similar position with the nearby Great Eastern Railway. There he did not well appreciate the different requirements of the line, a far-flung concern compared with the North London, and his locomotive designs for the company were found to be underpowered for main-line work. However his refitting of the company's Stratford Works using modern, standardised equipment saved a great deal of money and, when he left for the London and South Western Railway in 1878, his reputation was intact.

On the LSWR he designed and built 524 locomotives, supervised the expansion of Nine Elms Works and the transfer of the Carriage and Wagon Works to Eastleigh. Failing health forced his retirement on 1895-05-29. He lived in Putney until his death on 1904-08-07.

WILLIAM ADAMS died at his residence, Hillrise, Putney, on the 7th August, 1904, at the advanced age of 81 years, having seen 40 years' continuous service in the locomotive departments of the North London, the Great Eastern, and the London and South Western Railways.

Born on the 15th October, 1823, he was apprenticed at the age of 17 to Miller and Ravenhill, marine engineers in London.

Subsequently he entered the service of Philip Taylor and Co at Marseilles, by whom he was employed for three years on the erection of marine engines and machinery, and in 1848 he joined the Sardinian Navy as an engineer, serving four years afloat.

Returning to this country in 1853, he was engaged by Mr. H. Martin as an assistant on various works until 1855. It was in the latter year that his long connection with locomotive engineering commenced on his being appointed to the position of Locomotive, Carriage and Wagon Superintendent of the North London Railway. While holding that post he introduced many improvements in the rolling stock under his charge, and organized and extended the workshops at Bow.

In 1873 he accepted a similar appointment with the Great Eastern Railway, with which Company he remained five years, reconstructing to a large extent the Stratford works and developing the rolling stock on the lines of his former experience, particularly in regard to the requirements of suburban traffic.

In 1878 he joined the staff of the London and South Western Railway as Locomotive Engineer, and continued in this position for seventeen years, retiring in 1895. Under his superintendence the Nine Elms Works were rebuilt and enlarged, and considerable improvements were effected in the rolling stock. Modern locomotive practice is indebted to Mr. Adams for many improvements introduced or effected by him during the course of a long and useful career.

The subject of this notice was a man of quiet and unassuming character, considerate to those under him, whose respect and esteem he enjoyed. He extended a ready support to any social and philanthropic schemes which came under his notice. especially those which promised to benefit railway servants. While at Bow he was largely instrumental in founding the Bow and Bromley Institute.

He was a Member of the Institution of Mechanical Engineers and of the Society of Engineers, of which he became President in 1870.

In 1895 he contributed to the Proceedings of the Institution of Civil Engineers, in collaboration with W. F. Pettigrew, a valuable description of 'Trials of an Express Locomotive,' carried out by them on the South Western Railway. For this Paper the Authors were each awarded a George Stephenson medal and a Telford premium.

Mr. Adams was elected a Member of the Institution on the 6th April, 1869.

By the death on the 7th inst. of Mr. William Adams the world has lost another of the older school of engineers. Mr. Adams was 81 at the time of his death and he had retired from active life for several years. He filled at different times the responsible post of locomotive superintendent to the North London, the Great Eastern, and the London and South Western railways, and we do not think that we claim too much for him when we say that he was the first locomotive superintendent in the world who realised the conditions under which suburban railway traffic would have to be conducted, and provided for it accordingly. The outside-cylinder tank engines which he designed for the North London Railway may be regarded as the progenitors of the the tank locomotive, each group more powerful than the last , which are employed in every large city at this side of the Atlantic in the conduct of suburban traffic.

Mr. Adams, when his school education was completed, was engaged for two years in Mr. Vignoles' office. Subsequently he served a regular apprenticeship with Messrs. Miller and Ravenhill on the Thames. His apprenticeship over, he found employment with the English firm of Taylor and Company, of Marseilles, engine builders. Thence he entered the Sardinian Navy as a marine engineer. We next find him employed by Mr. H Martin, M. Inst.C.E. on various works, and at the age of thirty-one he was appointed locomotive superintendent of the North London Railway. After 19 years' service on that line he became locomotive superintendent of the Great Eastern Railway until 1878, when he succeeded Mr. Beattie as locomotive superintendent of the London and South-Western Railway, a post which he held until he retired in 1896 from active live.

He was one of the first British engineers to recognise the value of the bogie; and the North London Railway having curves with a radius as small as four chains, he invented and used the now well-known traversing bogie. It was illustrated in THE ENGINEER for January 12th, 1866. Across the centre of the bogie frame a stout, flat girder is fixed, on the top of this rests a casting which can slide on it. The upper surface of this casting is channelled circumferentially and in the channel is placed a heavy india-rubber ring. The flat girder is slotted in the middle to permit this casting to traverse each way about 4in. from the centre. The bogie pin is secured to the engine, and passes through a channelled casting, the counterpart of that resting on the bogie. The india-rubber ring before mentioned is compressed between the two and deadens shock. The engine is carried on three points, namely, the bogie centre and the centres of two compensating levers between the driving wheels. The advantages possessed by this bogie were so great that it became an immediate success on the North London Railway , where, indeed, many of the Adams engines are still at work. He found that considerable difficulty was encountered in preventing outside cylinders from getting loose, and he devised an arrangement by which the valve-boxes passing through the side frames constituted parts of hollow girders, so that the side frames were spared twisting stresses, the two cylinders virtually becoming one. In 1866 he brought out a standard inside cylinder engine for the North London Railway, and we illustrated that engine in our impression for March 2nd, 1866. The article accompanying this illustration may be read with peculiar interest now. The passenger coaches weighed empty only 7.5 tons each, and carried fifty passengers second class and thirty-two first class. Mr. Adams was, so far as we know, the first man out of America to employ a pressure of 160 lb. in regular railway practice, and his action was deemed by many persons as fraught with danger and altogether too audacious.

At a subsequent period he turned his attention to draught, and introduced the vortex blast pipe, which met with considerable favour.

In the introduction of minor details which would add to the efficiency or economy of a locomotive he was indefatigable. Those who knew him best will most regret him.