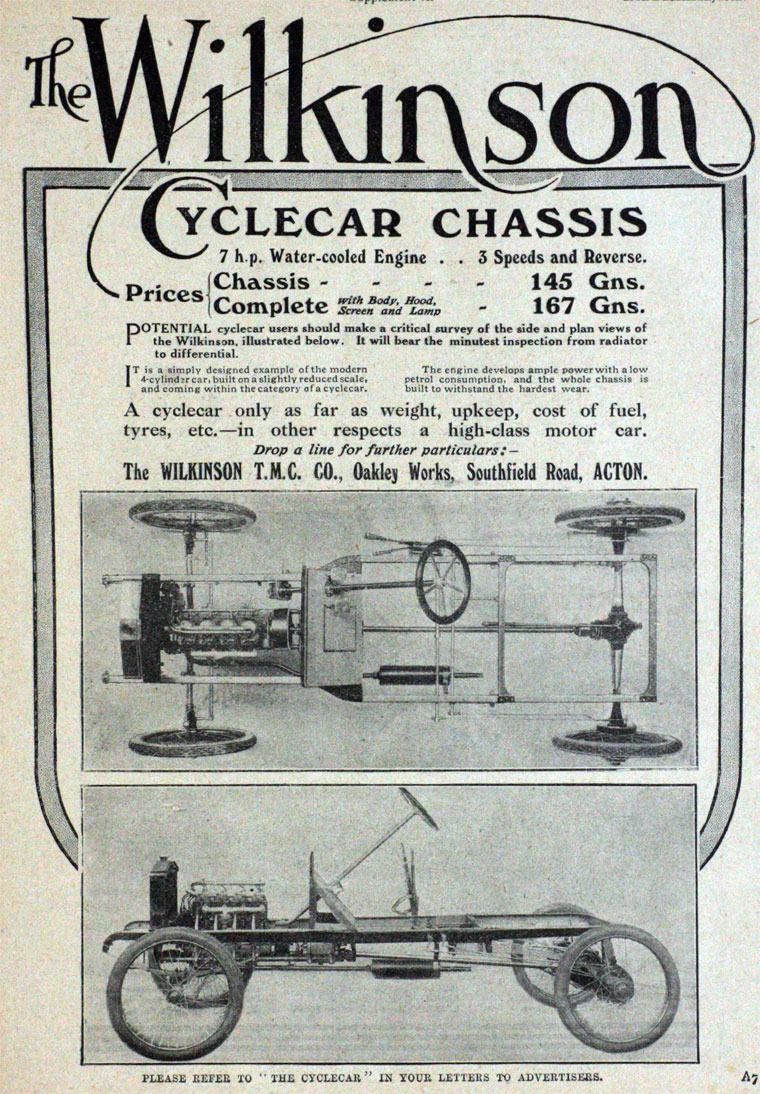 Note: This is a sub-section of Wilkinson Sword

Wilkinson Sword produced motorcycles from 1908 to 1915, and also cars, in Acton, London.

1908 The first machine was originally designed as a military scouting model by P. G. Tacchi, who was granted patent rights in 1908. The machine, mounting a lightweight, quick-firing Maxim gun, did not impress the authorities and Wilkinson carried on with a luxury touring version.

1909 This luxury machine was built by the firm that was already famous for swords, bayonets (and later for razor blades and garden tools). The motorcycle was long and had an in-line four-cylinder engine, clutch, three-speed gearbox and shaft-drive to a worm at the rear wheel. engine capacity was 678cc, the crankcase cast-iron and split horizontally, the drive from clutch to gearbox by spring steel to absorb shocks, and starting by hand lever. To begin with, Chater-Lea leading-link forks were used, but these were soon changed to a Wilkinson design. The rear wheel was supported by four quarter-elliptic springs. The oil tank went just behind the headstock, but the petrol tank was placed on the rear mudguard and the rider was provided with a bucket seat. This machine was listed as the Touring Auto-Cycle or TAC but it was best known by the company name of Wilkinson.

1909 Late in the year, the first TAC appeared with the fitment of a steering wheel.

1910 The TAC was advertised as having a steering wheel.

1911 The engine size became 550cc for one model that had mechanical inlet-valves. Handlebars returned.

1911 A new engine was developed at the Oakley works in Chiswick for the luxury production Wilkinson, which was designated the 'TMC' (for Touring Motor Cycle).

Wilkinson also diversified into light car production around this time and designed an enclosed sidecar with leaf spring suspension as an option for the TMC.

1912 The capacity went up to 848cc and, originally air-cooled, the engine was redesigned as a water-cooled unit. The Bosch magneto was mounted on top of the gearbox and thus under the seat. Bevel drive replaced the worm at the rear axle, and Druid forks replaced the leading links. The name was changed to the Touring Motor Cycle or TMC. TMC, the initials of Touring Motor Cycle, which was produced from 1912 to 1915. This was a four-cylinder, three-speed, shaft-drive luxury machine that had suspension for both wheels and a bucket seat for the rider.

1913 The TMC was only sold as a sidecar outfit, and a brief link with the Wooler Engineering Co was reported.

1914 Both solo and sidecar versions were offered and, during the year, manufacture was taken over by the Ogston Motor Co Many detail improvements were made. Ogston also made the Deemster car.

1915 The Wilkinson was still listed as 848cc using bevel drive, and as 1087cc with worm drive - both with three-speed gearbox.

1919 The power unit returned after the War in the Deemster car but the motorcycle was a casualty of the war.