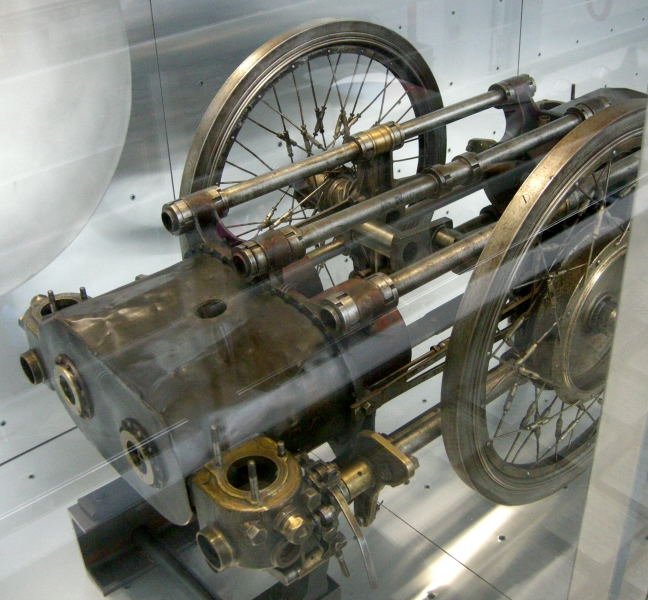 5. Drive shaft from 1911-1913 Kress gyroplane, with one bevel gear claimed by a tree, displayed at Vienna Technical Museum

Born of German parents in St. Petersburg in 1836. Moved to Vienna in 1873, where his self-propelled flying models attracted much attention. He became a naturalized Austrian.

Between 1898 and 1901 he constructed a seaplane, the 'Drachenflieger'. He could not find a suitable place on land for takeoff attempts and hoped that the water would limit the severity of any accidents. Kress expected a take-off weight of 600 kg and an engine output of at least 30 hp. As no suitable engine could be found in Austria, Kress ordered an airship engine from the Daimler-Motoren-Gesellschaft in Stuttgart. However they delivered an engine weighing 380 kg instead of the anticipated 200 kg, and only developing about 30 hp instead of 35 hp. Because of the excessive weight of the engine Kress had to stengthen the aircraft, resulting in a take-off weight of 850 kg. It was perfectly clear to Kress that with such a mismatch between weight and power, he would never reach the speed necessary to take off. However, he wanted to use the plane at least for test taxying on the lake. However, the floats were very deep in the water, as they had not been designed for this high weight. During the tests, the small size of the lake required Kress to make a sharp turn to avoid colliding with the dam. On the fourth test, on 3 October 1901, a wing touched the water during a sharp turn, whereupon the aircraft capsized and sank. Wilhelm Kress was rescued unhurt. The wreck of the plane was salvaged after three days, and the engine was recovered for Kress.[1]

Vienna Technical Museum has a good display on Kress's work.

An early aero engine on display in Prague National Technical Museum is described as being designed by Wilhelm Kress and made by Bernard Adam, and is dated at 1898. See photos. Its context is unclear. It is not the engine which powered his flying boat in 1901.

The engine has four cylinders, horizontally opposed. Note the efforts made to minimise weight - thin-walled castings, wire-spoked flywheels, large diameter bored holes in crankshaft, hollow tiebars. The connecting rods and the centre bearing and its bracket are missing. One of the crankshaft skew gears for driving one of the two camshafts is just visible inboard of the flywheel. Note the turnbuckles on the wire spokes.

Some of the constructional features resemble those of Maxim's steam aero engine, completed in 1893.