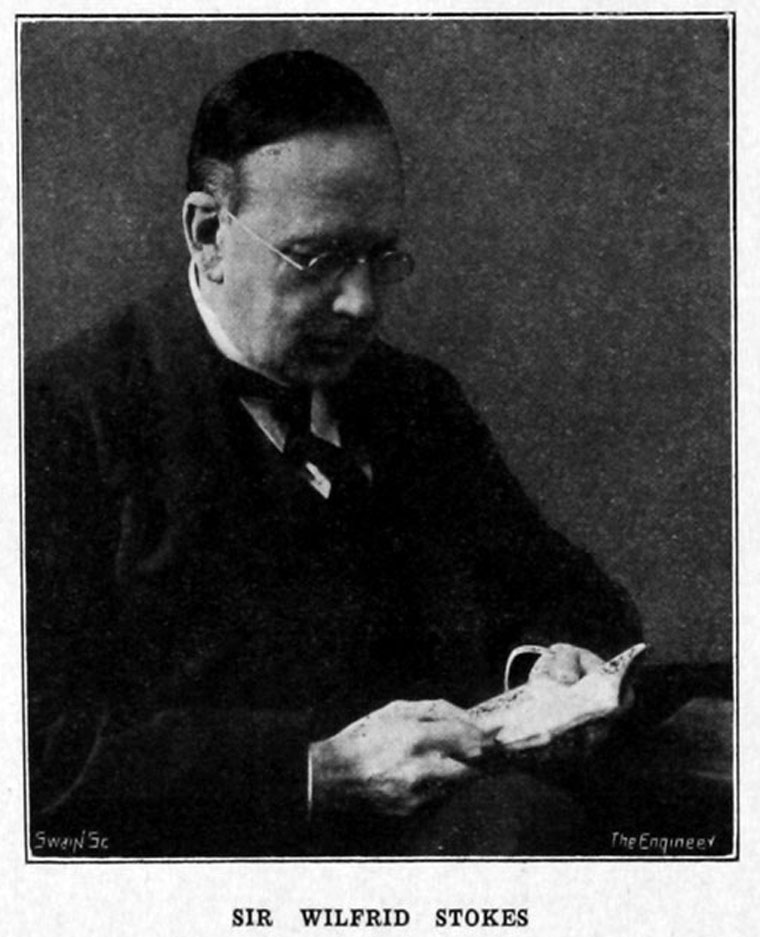 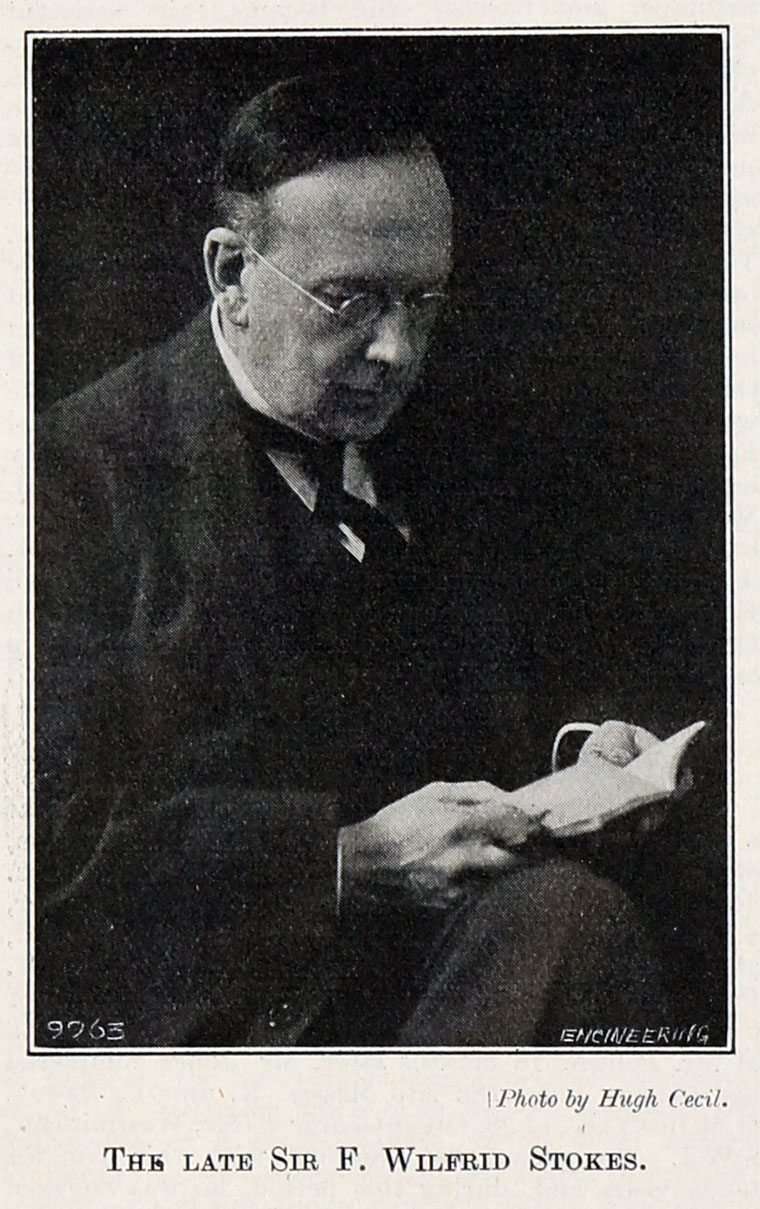 Sir (Frederick) Wilfrid Scott Stokes (1860-1927), civil engineer and inventor of the Stokes gun, and managing director of Ransomes and Rapier

1878 Of Holland St, Kensington when he became a student member of the Institution of Civil Engineers[2]

1881 to 1885 worked under Sir William Shelford designing bridges and other steelwork construction for the Hull and Barnsley Railway.

1885 Joined Ransomes and Rapier of Ipswich as assistant to Richard Christopher Rapier, the managing director.

Stokes took out patents for rotary kilns for cement making, which were a distinct advance on the Ransome kiln of 1885. Also improved Ransomes and Rapier's breakdown crane and invented a shallow traverser for railway carriage and wagon stock.

Stokes superintended the erection of Stoney's sluices on the Manchester Ship Canal and improved their design, notably by protecting the rollers from scour when the sluice was open, and by devices for ensuring they were completely watertight, and for preventing vibration of the rollers. These sluices were subsequently employed for the Aswan Low Dam on the Nile and for the Sennar Dam on the Blue Nile.

1896 when the firm was converted into a limited company, Stokes was appointed engineer and managing director of the London office.

1897 On Rapier's death Stokes succeeded him as managing director

1907 became chairman of the company, holding both top offices until his death.

WWI Designed the Stokes gun in response to the army's need for a lightweight, portable mortar. It was rejected by the War Office in December 1914 because many shells missed their targets, but the gun was subsequently used in the trenches at the battle of Loos in September 1915, firing smoke shells.

1915 Stokes was one of the scientists and engineers involved in the munitions invention department.

1916-8 President of the British Engineers' Association.

1918 President of the Industrial Reconstruction Council.

'Widespread regret will be felt at the death of Sir Wilfrid Stokes, which took place on Monday last. Sir Wilfrid was, to the general public, possibly best known as the inventor of the Stokes gun, which played such a prominent part in the later stages of the Great War; but he was, as a fact, distinguished in many branches of engineering, and his loss will be severely felt, not only by the London and Ipswich staffs of Ransomes and Rapier, who whom he was associated for so many years, but also by a very large circle of friends.......'

'......There are men that it does you good to meet, if it be no more than to pass the time of day. Sir Wilfrid was one of them. His quiet and courteous manner would sooth the ruffled nerves, whilst his happy disposition infected then those less naturally cheerful than himself. No man is universally liked, but we imagine few, placed as he was in a position where firmness was at times necessary, number so many acquaintances who regard them almost as friends as did Sir Wilfrid Stokes.'

A large circle of the non-technical public will share the regret felt by the engineering profession at the death, after a relatively short illness, and at the comparatively early age of 66, of Sir Frederick Wilfrid Scott Stokes, chairman and managing director of Messrs. Ransomes and Rapier, Limited, Ipswich. Though engineers appreciate to the full his prompt response to the calls of war in the invention of the unique gun which bears his name, they will appraise more highly, perhaps, his lifelong service to those more lasting and noteworthy arts of peace which have helped to render many desert lands productive.

A son of Scott Nasmyth Stokes, a colleague of Matthew Arnold’s in the inspectorate of schools, Frederick Wilfrid Scott Stokes was born on April 9, 1860. He received his earlier education at St. Francis Xavier’s, Liverpool. This was followed by a period at the old Catholic University College in Kensington, which institution he left at the age of 18 to become a pupil with Mr. Lancaster Owen, M.Inst.C.E., of the Great Western Railway Company. In 1881 he joined, as assistant, Sir William Shelford, M.Inst.C.E., and remained in that position until 1885, being engaged on such constructional work as the design of bridges, &c., for the old Hull and Barnsley Railway. His next post was as assistant to Mr. R. C. Rapier, M.Inst.C.E., his work being largely on lifting appliances and railway plant.

Mr. Stokes was, about this time, also engaged in pioneer work in connection with rotary kilns for cement making. His patents of 1886 to 1888 show a distinct advance on the Ransome kiln of 1885, inasmuch as the waste heat from the kiln itself was used to dry the wet slurry on the outside of a separate drum. The now well-known clinkercooling and air-heating cylinder was embodied in it. For some reason or other the subject does not appear to have been followed up in Great Britain, though the cement manufacturers in the United States were quick enough to realise the soundness of the methods adopted, and it was from that country, some fifteen years later, that the rotary kiln was re-introduced here in a modified form.

It may be, however, that other subjects exercised a greater attraction, for it was during the ’80’s that Messrs. Ransomes and Rapier acquired the patent rights of the Stoney sluices, originally invented in 1874, and thus commenced the firm’s connection with water-control devices for irrigation and water-storage projects. The first important order for these sluices was for equipment on the Manchester Ship Canal, and subsequent erection there was supervised by Mr. Stokes. The original designs for this type of sluice were greatly improved, as time went on, largely by Mr. Stokes himself, notable developments by him being arrangements for protecting the rollers from scour when the sluice is open, methods of ensuring complete water-tightness, and for preventing vibration of the rollers.

Perhaps the best-known example of the employment of these sluices as thus made by the firm is that of the Assouan Dam on the Nile. This structure has 110 sluice gates, though a certain number are not provided with the characteristic rollers. The work on these as well as on the lock-gates and other ironwork was described in a paper read by Mr. Stokes before the Institution of Civil Engineers, in January, 1903, he having been present at the opening of the first sluice in December, 1901. It may be remembered that this immense work was completed a year ahead of the contract time, no mean achievement.

Twenty-four years later, in January, 1926, Sir Wilfrid Stokes, as he had then become, was again present at the opening of the Sennar Dam, the sluices for which had been made by his firm. This was on the Blue Nile, above Khartoum, and in it there are 80 sluices closed by the improved Stoney gates and operated by petrol-driven travelling cranes. This work was described and illustrated on page 104 of vol. cxxi, of Engineering. Sir Wilfrid Stokes’ participation in the important work of irrigation in Egypt was recognised by the bestowal by the late Khedive of Egypt of the decorations of the Second Order of Osmanieh and the Second Order of Medhijieh. The supply of these gates has not, however, been confined to Egypt and the Sudan, for they are to be found in places as wide apart as the River Nenquen in Argentina, in India, New Zealand, China, and many other parts of the world.

In the early days of the firm, considerable attention was paid to the supply of railway matefial, such as turntables, etc., and this subject, too, was studied by Mr. Stokes, who was instrumental amongst other things, in developing the firms well-known breakdown crane, and invented a shallow traverser for railway stock. Mr. Stokes became, in 1896, when Messrs. Ransomes and Rapier was converted into a limited company, engineer and manager of the London office. Mr. Rapier died in 1897, and Air. Stokes then became managing director. The Chairmanship of the company followed in 1907, and he occupied both posts up to the time of his death.

Passing to the war period, the original design of the Stokes gun was submitted to the War Office in December, 1914, to meet with rejection. Mr. Stokes was, however, confident of the ultimate utility of the ideas embodied in it and commenced experiment with a somewhat crude gun at Ipswich. The result of much patient trial, made with characteristic thoroughness, was the weapon which made its first appearance in the trenches at the battle of Loos, in September, 1915, firing smoke shells. By this time the value of the invention had been recognised, and Mr. Stokes had become a member of four of the Committees of the Inventions Department of the Ministry of Munitions.

Improvements in both gun and projectile followed, and the gun was, in the later stages of the war used for high explosive bombs, gas, smoke, and incendiary projectiles, not only on land but in such naval operations as the attack on the Zeebrugge mole. It is hardly necessary to refer further to this interesting weapon except to state that a fully illustrated description may be found on page 719 of vol. cv of Engineering in our account of the Gustave Canet lecture delivered by Sir Wilfrid (the distinction of K.B.E. had been conferred upon him in 1917), before the Junior Institution of Engineers in June, 1918. To the credit of the engineer it may be said that the invention of the Stokes gun solved a problem which the professional gunner had essayed up till then with only very partial success.

It may be recalled that Sir Wilfrid Stokes was President of the British Engineers’ Association from 1916 to 1918. The list of organisations he has been associated with is a testimony to his versatility and activity, indeed, it is too long to quote here, but typical instances are those of Chairman of the Controlled Firms Section of the Federation of British Industries, President of the East Anglian Association of Engineering Employees, and President of the Industrial Reconstruction Council, 1918. He was elected an Associate Member of the Institution of Civil Engineers in 1885, and became a full member in 1902. He was highly regarded by the officials and employees of the firm, and showed a sympathetic and wise understanding in his care for the welfare and recreative side of the organisation."