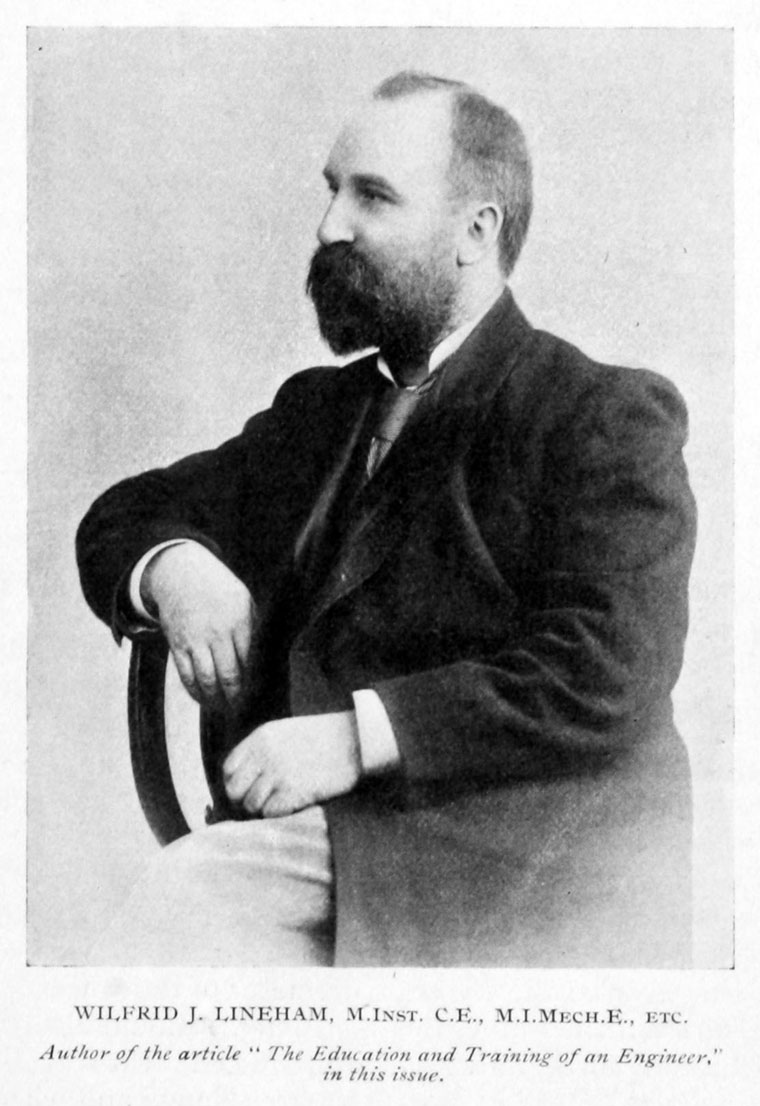 Contributed "The Education and Training of an Engineer" in The Engineering Times 1899-1900 Jul-Jan.

1900 Head of the Engineering Department of the Goldsmiths' Institute

WILFRED JAMES LINEHAM was born at Leeds on 17th December 1858.

After the usual primary and secondary education he passed the B.Sc. Examination in Engineering at the University of London, and obtained a studentship at the Normal School, now the Royal College of Science.

From 1880 onwards he had also been engaged in teaching engineering subjects at Leeds, Dewsbury, Wakefield, and at the School of Science and Art, Newcastle-on-Tyne, now the Rutherford Technical College.

In 1890 he was appointed Professor of Engineering and Mechanical Science at the Goldsmiths' Company's Technical Institute, New Cross, London, which position he held until his death.

On the outbreak of the War he was in Bavaria, but managed to reach home after a fortnight's detention and hardship.

In July 1915, under the London County Council Education Department's scheme for using the Technical School Workshops of London for war service, Mr. Lineham organized that at Goldsmiths' Institute with great success for the manufacture of gauges for fuses and shells.

In 1916-17 he undertook the manufacture of screw-pitch measuring machines to the designs supplied by the National Physical Laboratory, and in the following year, owing to the great demand for aeroplanes and machine-guns, position gauges were turned out instead of the simpler form of gauge. The features of the screw-gauge work were the success obtained on small sizes and the method of producing hardened steel screw-gauges without lapping.

In November 1918 his health broke down from overwork, and he was ordered a complete rest.

His death took place suddenly at Brighton on 17th April 1919, at the age of sixty. He was very versatile, being an able musician, and his paintings were frequently shown at the Royal Academy.

WILFRID JAMES L1NEHAM was born at Leeds on the 17th December, 1858, and served his apprenticeship with Messrs. John Fowler and Company of that city. He remained with that firm altogether for about 10 years, during part of which period he was engaged in the design of ploughing, traction, and stationary engines.

Concurrently with his work as a designer he devoted considerable attention to teaching. For two years he conducted evening classes in Leeds, Dewsbury, Wake Held, etc., and later was principal lecturer in engineering at the School of Science and Art (now the Rutherford College), Newcastle-on-Tyne.

He was the author of a "Textbook of Mechanical Engineering" which has become a standard work. At the outbreak of war he was in Bavaria, and after much hardship managed to get back to England.

In 1915, with a staff composed of his own assistants in the Engineering Department of Goldsmiths' College and a number of London County Council manual training instructors, he attacked with considerable success the problem of manufacturing gauges for fuses and shells, for which there was a heavy demand at the time by the then newly-formed Ministry of Munitions. Later he undertook the manufacture of screw- pitch measuring machines to designs supplied by the National. Physical Laboratory, and 20 of these machines, capable of giving screw-pitch measurements to 0.00001 inch, were made at Goldsmiths' College. Early in 1918, owing to the great demand for aeroplanes and machine guns, he was asked to cease the manufacture of the simpler form of gauges and to increase the output of position gauges, and to undertake the manufacture of screw gauges, directing his whole energy to these two types.

In November 1918 his physician sent him home to rest from labour, physical and mental, but the anxieties of the last four years had been too much for him and he died suddenly on the 17th April, 1919. His versatility was very remarkable, for, in addition to his great attainments in science, he was a clever musician and a painter of such ability that his works were frequently to be seen on the walls of the Royal Academy.

He was elected a Member of the Institution in 1902.