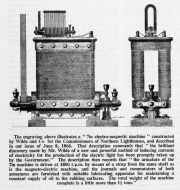 1956 illustration of 1866 machine for the Commissioners of Northern Lighthouses

c.1860 Henry Wilde started in business as a telegraph and lightning-conductor engineer. He noticed that gas and water pipes caused fires by furnishing a path for electrical flow alternative to that of the lightning conductor, and he strongly urged that the pipes should be connected metallically with the rod, which became general practice.

1866 Electro-magnetic machine for the Commissioners of Northern Lighthouses. Illustration and description.[1].

1873 'THE ELECTRIC LIGHT FOR OCEAN STEAMERS. An interesting electrical experiment was made last night at the Pacific Steam Navigation Company's Works, Birkenhead. The experiments were conducted by Mr. H. Wilde, electrician, Manchester, the inventor of an apparatus by which the electric light can be utilised at sea. Mr. Wilde's new electro-magnetic induction machine, in combination with an improved apparatus, for regulating the approach of the carbons as they are consumed, and an instrument for condensing the electric rays, produces a powerful beam of light. Mr. Wilde's machine consists of a circular or barrel-shaped framing of cast iron, round the interior of which are arranged a number of electro-magnets at equal angular distances from each other. A cast iron disc is mounted on a driving shaft running on bearings fitted to each side of the framing, and carries a number of armatures revolving before the electro-magnets. A small part of the electric current is used to excite the electro-magnets, and the remainder is carried off to ignite the carbon poles. The machine is driven by a steam engine of eight horse power. In order to secure a greater range for the light last night, the regulator was carried up to the roof of the Pacific Company's workshop, a height of 80 feet, the machine being placed in the basement. The light was sent through a catadioptric holophote, by which all the rays are collected or parallelised. To make the beam available for the purposes he had in view, Mr. Wilde has designed and substituted for the delicate mechanism by which the carbon poles have hitherto been adjusted an improved regulator. The carbons as they consume are made to approach each other again by means of a right and left handed screw, which a seaman can work by a few touches every three or four minutes. The holophote and regulator are pivoted vertically and horizontally, so that the light may be directed upon any object within the vertical angle of its range. They are mounted on a short iron pillar, which can be fixed on the deck of a ship. The machine exhibited gave a light equal to 9,600 wax candles, and it is capable with the same power of giving another light of the same volume, and when parallelised by the catadioptric holophotal arrangement multiplies the above light many times. When it is considered that the best lights at present in use by the mercantile marine can be seen, under favourable conditions, only two and a half or three miles distance, and vessels frequently approach each other at a rapid rate, shortening the distance between the two to a mile and a half, it will be seen that collisions are almost unavoidable, even under the most careful system of watching. This electric machine would of course supply a light which would be available at a much greater distance, and render impossible such a calamity as would ensue in the event of two of our great steamers coming into collision with each other. Last night a very strong beam of light was thrown out by the reflector upon the ships in the river, upon the landing stages on the Liverpool side, and other objects. The height attracted much attention in Bootle, Everton, Seacombe, and Egremont, while the names of steam-tugs lying on the Liverpool side could be read from Birkenhead. The light projecting on the George's Landing-stage was sufficient to enable a person to read newspaper print. The experiment will be repeated to-night.'[2]

Location: Goad's Insurance Plan for 1928 shows that at that date, the factory at No. 37 Mill Street was being used for food processing. It was located on the north side of Mill Street, close to the junction with Kirby Street, and next door to St Jude's Church. Behind the works were glass-making cones, and across the streeet was Ancoats Hospital.