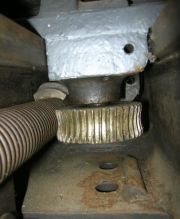 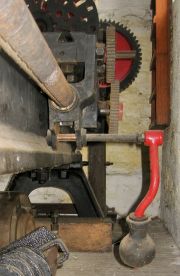 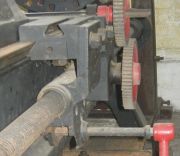 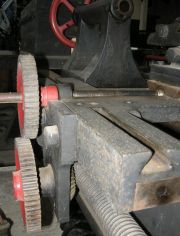 This is a sub-section of Joseph Whitworth and Co

The early part of the 19th century saw the introduction and wide acceptance of heavy duty industrial lathes of a form which is still familiar today. This type of lathe can be characterised by having a cast iron box bed, a range of spindle speeds, and self-acting feeds for surfacing and screwcutting. The earliest producers of such machines were Richard Roberts and James Fox (Fox of Derby), closely followed by Joseph Whitworth.

On Fox's lathes the carriage was guided by one Vee and one flat way, and longitudinal and cross traverse of the tool was provided using a square layshaft behind the bed, while screwcutting lathes were provided with a leadscrew at the front. The spindle had opposed conical steel bearings in unsplit housings.

Joseph Whitworth appears to have adopted a similar headstock spinde arrangement, but his bed design was very different. He used dovetail guides, and the supporting ways were wide and flat, giving good support for the carriage to resist deflection under cutting forces. There was a single leadscrew for both screwcutting and surfacing, and where possible this was tucked away under the bed ways to minimise the chance of swarf falling onto it. Where possible the leadscrew was placed centrally under the carriage to minimise the tendency to twist (rotate) the carriage. An unusual arrangement was provided for making the leadscrew serve for screwcutting, for self-acting traversing and cross-feeding, and for manual feeding. The deceptively simple appearance of the carriages belies this versatility. Gears for screwcutting were mounted on a swivelling plate and could be changed relatively easily. This arrangement came to be very widely used, but Whitworth was probably preceded by Joseph Clement in its use.

Some or all of the features described above appear to be included in Whitworth's patent of 1835. The leadscrew arrangement in the 1839 lathe is very diffferent, but it appears that this is the result of modification.

Photo 1 shows the arrangement on Whitworth's early lathes [1]. Photo 2 is an enlargement of part of photo 1. In photo 2 we see the leadscrew D permanently engaged with the bronze wormwheel W. Its shaft is part of a train of three bevel gears. The right hand bevel gear drives the spur gears z which, if a clutch is engaged by the small vertical lever, will provide powered feed to the cross slide for surfacing work. In this mode, the carriage would be locked to the bed using the screw 'y' (fitted with a small handle). When disengaged, the cross slide can be swivelled to turn tapers, but only with manual feed.

If the cross slide clutch is disengaged, then the bevel gears do no work. The left hand bevel gear will be idly turning its shaft (the crank handle x would be removed). However, if the leadscrew is stationary, turning the hand crank will rotate the worm gear, and the stationary leadscrew will act as a rack. The carriage can then be traversed manually.

For screwcutting, the leadscrew is engaged with the carriage by a split clasp nut. This is not shown in the drawing, but Atkinson provides a drawing of the arrangement in his Whitworth biography [2]. One half of a clasp nut can be seen on the lathe at Erddig (photos 5 & 6). The clasp nut is operated by the small diameter horizontal rod seen in photo 4. In fact it is by no means clear whether the Erddig lathe's clasp nut did have two halves.

Using the leadscrew as a rack was far from ideal, not least with regard to wear, and Whitworth sometimes provided his lathes with a rack and a pinion.

This is the oldest surviving Whitworth lathe known to Grace's Guide. It has a rack and pinion at the front for manually traversing the carriage, and a leadscrew at the back for screwcutting and for powered traversing and surfacing. These features have a rather makeshift appearance, suggesting that they are not original. This is supported by photo 10, which shows that the transverse webs between the two sides of the bed are shaped to clear a central leadscrew, and that the slideway on one side of the bed was extended to cover the leadscrew.

As modified, the leadscrew would be connected with the carriage by a form of clasp nut, engaged by the weighted lever seen hanging down in photo 11 (it would have stood upright in practice). It will be seen that a keyway is cut along the length of the leadscrew. This would engage with the bevel gear just visible in photos 12 & 13. The bevel gear would have driven the cross slide when required, by sliding the upper spur gear into engagement.

Photo 9 shows the arrangement used to take the spindle's thrust load. The large screw would have been adjusted to take up the end float.